It was a tweet heard ’round the internet. Two images, side by side: a regal blue Royal Dansk tin, filled with sugar-studded butter cookies slotted in white wrappers, next to an identical tin with a much less enticing assortment of buttons and thread. Written beneath the first image: “My fall plans.” Under the second, “the Delta variant.”

The tweet in August, which followed a popular meme about pandemic disappointment, drew more than half a million likes and 75,000 retweets. Its author, the film critic Carlos Aguilar, was surprised to find that he had hit on a seemingly universal experience: the repurposing of a Royal Dansk tin as a sewing kit, and the dismay of all of the children who’ve opened one.

“This thing that I thought was a very niche and specific to being Latin and being Mexican turned out to be a global phenomenon,” said Mr. Aguilar, 32, who grew up in Mexico City and lives in Los Angeles.

Food can inspire strong emotions. And sometimes the container it came in can evoke an even stronger response. Royal Dansk tins, Cool Whip tubs, Dannon yogurt containers and Bonne Maman jam jars — all belong to an unofficial hall of fame of receptacles that have been redeployed for a myriad uses, giving them countless afterlives and often imbuing them with special meaning that transcends whatever they contained in the first place.

When Folu Akinkuotu sees a Royal Dansk tin, she thinks not of the cookies, but of the time her mother taught her how to sew on a button. The taupe tubs of Country Crock spread, with their nostalgic rendering of a barn, remind her of how her family used them to store leftover jollof rice and egusi stew.

The Country Crock container proved to be especially functional, said Ms. Akinkuotu, 31, who lives in Boston and writes a newsletter about snacks called Unsnackable. “It wasn’t fading even after it went through the dishwasher, even after it was microwaved multiple times, or it was passed around from family to family.”

“I have a relationship with the container,” she declared, “not the product itself.”

Over the past few years, perhaps propelled by the do-it-at-home spirit of the coronavirus pandemic, these containers have become pop-culture totems. In the 2020 Pixar movie “Soul,” a Royal Dansk cookie tin containing sewing supplies sits in the tailor shop of the protagonist’s mother. While making dosa together in a 2019 video, the actress Mindy Kaling and Kamala Harris (then a presidential candidate) bonded over how their parents stored spices in Taster’s Choice instant-coffee jars. In October, the novelist Rachel Khong will start a podcast called “Trash/Treasure”; each episode will center on how a specific container is made, and the ways in which it’s reused.

Across social media, the reincarnations have become part of the cultural discourse, as people realize that what they thought was a quirk of their particular community or generation is far more widespread.

There’s no limit to what can be turned to a new purpose: the purple drawstring bags that sheathe Crown Royal whiskey for keeping Scrabble tiles, Altoids tins for spare change, Folgers coffee cans for nuts and bolts.

Some companies are well aware of their containers’ appeal. Country Crock’s Instagram page teaches how to turn an empty tub into a bird feeder or the base for a gingerbread house. Dannon’s has a post on growing an herb garden in a yogurt cup. But representatives for those two companies and Royal Dansk said their packaging wasn’t intentionally designed to be reused.

Jonathan Asher has worked in package design and research for more than three decades. He said that when consumers in focus groups have spoken only about how they might repurpose a container, “that was the kiss of death.”

“That doesn’t get people to buy the product if the benefit is only, ‘I can put buttons in this pack.’ ” 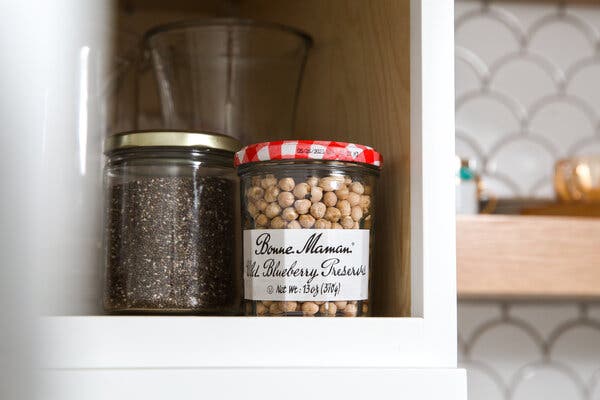 The most popular containers to reuse tend to be ones that are well designed and sturdy, like Bonne Maman jam jars. Credit…Jessica Pons for The New York Times

The American packaged-food industry as we know it emerged in the late 19th century. By the time of the Great Depression, reusing store-bought containers had become a popular means of saving money and stretching meals, Mr. Asher said. For many people today, the older containers are reminders of thriftier, more resourceful times.

Deva Hazarika, 49,said that when he was growing up in Houston, he didn’t know of many families that bought Tupperware, Rubbermaid or other brand-name storage products. As for food containers, he said, there were only a handful that were well designed and widely available, and came with an inexpensive product.

Mr. Hazarika, who has founded several business software start-ups in San Francisco, loved Royal Dansk tins, for what he called their “faux elegance” and “classy” script. He used them to store school supplies; even if they rattled around in his backpack, the lid would stay put.

The home sewing kit is the most popular use for cookie tins. The practice became common during World War II, when people were encouraged to reuse materials as much as possible, a spokeswoman for Royal Dansk said.

As a boy, Deva Hazarika used Royal Dansk tins to store his school supplies. Today he uses Talenti gelato containers for his spice rubs.Credit…Gabriela Hasbun for The New York Times

But Marina Feng, 28, a reporter for HuffPost, said her family discovered that the tight-sealing tins kept wood-ear mushrooms tasting fresh long after they were bought.

The family of Megha Desai, 42, found the tins to be the perfect size for storing papadum. And those weren’t the only containers reused in the Boston-area household where she grew up: Dannon yogurt tubs could hold “exactly two to three portions of dal,” and several could fit in the refrigerator at once, she said. Nescafé instant-coffee jars were pressed into service for chai masala. Vlasic pickle jars housed lentils. (Ms. Desai, who now lives in New York City and heads the nonprofit Desai Foundation, couldn’t understand why her family had so many pickle jars, yet never ate pickles. Her mother, it turns out, had arranged with an Italian restaurant to take its empty jars.)

As a child, Leslie Stockton, 48, an educator in Alexandria, Va., used Country Crock tubs to keep Play-Doh moist, and her grandfather used them for nails and screws. She recently turned a five-year-old one into a planter. Unlike many other containers, she said, Country Crock tubs are stackable and easy to clean.

Elizabeth McMullen, 34, a publicist for the Organic Valley dairy cooperative, recalls that Cool Whip containers were similarly prized for their versatility and sturdiness at her grandparents’ home in western Wisconsin. If the containers were dropped, the lid wouldn’t fly off, she said. The plastic was easy to write on, so her grandmother could label leftovers. And when there was no label, Ms. McMullen loved the mystery of the opaque containers —  is this one filled with mashed potatoes, or whipped cream?

Not all containers have the mass-market recognizability of a Cool Whip container or Royal Dansk tin. But they can still hold special meaning.

Christina Valle, a publicist in Boston, feels that way about Doña Maria mole jars, which her grandmother used as drinking glasses. “It kind of looks like a fancy crystal glass” once the label is taken off, she said. When she was young, drinking lemonade out of one always made her feel like an adult.

Her grandmother died three years ago, but her family still has the jars. “I am allergic to nuts, so I can’t actually have mole,” she said, but “it brings back those happy memories of her.”

Ms. Valle, 30, used to be embarrassed about her grandmother’s obsession with reusing containers. “It showed that maybe you didn’t have a certain social status,” she said. Now, she is proud of it, as are the others she sees posting on the internet.

Ms. Akinkuotu, who writes the snack newsletter, says she and many others her age have come to realize that their families aren’t the only ones reusing packages. “I think especially as millennials, we like to think that all of our experiences are very unique,” she said. “A lot of them are not.”

The containers she and others her age reuse tend to be of more recent vintage than, say, the Country Crock tub: Crofter’s jam jars, Talenti gelato cups or Classico pasta sauce jars. But containers like Country Crock’s remind her of a bygone era — when pastels and minimalism weren’t the predominant product aesthetic, and before exposés about corporate abuses made the concept of brand loyalty exceedingly complicated.

“You may not miss the actual experience of eating those items,” she said. “But interacting with those brands and having a relationship with a brand,” as she once did, “you kind of miss that, in a weird capitalistic way.”

Eric Rivera likes to surprise guests at his Seattle restaurant, Addo, by serving a dessert from Royal Dansk tins. But one guest’s tin may contain sewing supplies. Credit…Kyle Johnson for The New York Times

Eric Rivera, 39, who owns the Seattle restaurant Addo, traces his love affair with a brand to childhood, when his mother used Country Crock containers to store sofrito. “Every time I see a Country Crock anything, I still think about it having food in there that is dope.” he said. “I don’t know too much now that signifies that.”

For all of the warm feelings they evoke, these containers aren’t necessarily vessels of unalloyed virtue. Some aren’t recyclable, and the plastics that make many of them so long-lasting are harming global ecosystems. Brian Orlando, the chief marketing officer for North America of Upfield, which makes Country Crock, says the company is trying to come up with environmentally friendly paper packaging for the spread that can still be reused.

As the traditional containers disappear, people may become even more sentimental about them, just as they have with vintage Pyrex bowls and vinyl records.

Mr. Rivera bought several Royal Dansk butter-cookie tins on eBay when he opened Addo in 2018, so he could incorporate his childhood memories into the dining experience. Every so often, he ends a tasting menu by placing a tin in front of each guest. They open the tins to find a sugar-cookie-flavored dessert, like ice cream.

But one of the tins doesn’t contain any dessert. Inside are sewing supplies.

This Year’s Thanksgiving Feast Will Wallop the Wallet

What the Food We Cook Reveals About Us

In Deepest Mendocino, Rebuilding a Life in Wine