Though it did not have a Dave Chappelle monologue to polarize the discourse for days to come, this weekend’s “Saturday Night Live” did what it could to generate some headlines: The host, Keke Palmer, revealed that she was pregnant! Cast member Kenan Thompson reunited with his former TV co-star Kel Mitchell! But first, a little topical satire.

Into their office, they welcomed their party’s contender for that seat, Herschel Walker (Thompson). “Hey there, Mitch McDonalds,” Thompson said as he entered. “I’m sorry I’m late. I was having too much fun in that free merry-go-round y’all got out front.”

Told by his colleagues that they thought he had a chance to win the coming runoff, Thompson replied, “Oh, well, I’m good at those. My ex-wife said all I do is run off.”

“Right,” Thompson said. “But you’ve got to remember, they’ve still got to count votes by female.”

Asked by Strong if he could share any additional “bad things from your past that maybe people don’t know yet,” Thompson eagerly responded, “Oh, yes definitely. So many.” A clock on the wall spun forward as he shared an anecdote, which he concluded by saying, “Anyway, she didn’t want to keep it, so I drove her down to the Planned Parent Trap.”

The three senators asked Thompson for some privacy and he happily obliged: “You can toss a blanket right over me and I fall asleep like a parakeet,” he explained, which they did. While he napped, his colleagues concluded that they had no choice but to go to Plan B.

Awaking Thompson, Johnson brought him to a security door that he said led to what used to be his panic room, and he instructed the candidate to wait there until the election was over.

“Look at that,” Thompson said. “They got Lunchables in here and everything.”

Monologue of the Week

Palmer, a star of the film “Nope,” strode onto the stage of Studio 8H wearing a stylish trench coat and ready to wage a serious charm offensive. She shared an anecdote from her time as a child actor, when she upset Laurence Fishburne, her co-star in “Akeelah and the Bee,” by laughing during one of his dramatic moments. “And my mama, she went off on him,” Palmer said. “She is so Chicago, she started screaming, ‘I don’t care if you was in ‘The Matrix’ — I’ll whoop Morpheus’s ass!’”

But Palmer had an even more surprising personal detail to share: “People have been in my comments, saying Keke’s having a baby, Keke’s pregnant,” she said. “And I want to set the record straight.” Here, she threw open her coat to reveal her pregnant belly and declared, “I am!” After the studio audience had a chance to react, Palmer laughed and said, “It is bad when people on the internet spread rumors about you, y’all, but it is even worse when they’re correct.”

Childhood Nostalgia of the Week

As an “S.N.L.” veteran of nearly 20 years, Thompson (who joined the show in 2003) has spent that time being asked — a lot — about his formative days on “Kenan & Kel,” the Nickelodeon kids’ sketch series that paired him with Kel Mitchell. Though Thompson has politely deflected past queries about whether he and Mitchell would ever reunite, he finally fulfilled the wishes of longtime fans.

While this segment starts out with Palmer duping Thompson into appearing with her in her preferred reboot, “Kenan & Kelly” (where she takes over Mitchell’s roles), the real Mitchell does indeed show up in Rigby’s convenience store, stretches out his arms in a gesture of affection — and runs to a refrigerator to hug a bottle of orange soda.

Weekend Update Jokes of the Week

Over at the Weekend Update desk, the anchors Colin Jost and Michael Che riffed on an antisemitic interview given by Kanye West, the rapper known as Ye, and on President Biden’s intervention in a potential railroad strike.

Tags
Palmer Said She That Thompson 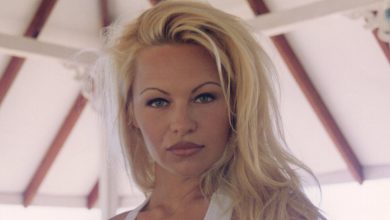 ‘Pamela, a Love Story’ Review: A Frank Look Back 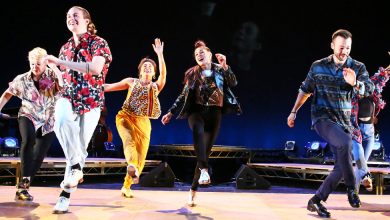