Doctors should no longer routinely begin prescribing a daily regimen of low-dose aspirin to most people at high risk of a first heart attack or stroke, according to new draft guidelines by a U.S. panel of experts. The proposed recommendation is based on mounting evidence that the risk of serious side effects far outweighs the benefit of what was once considered a remarkably cheap weapon in the fight against heart disease.

The U.S. panel also plans to retreat from its 2016 recommendation to take baby aspirin for the prevention of colorectal cancer, guidance that was groundbreaking at the time. The panel said more recent data had raised questions about the putative benefits for cancer, and that more research was needed.

On the use of low-dose or baby aspirin, the recommendation by the U.S. Preventive Services Task Force would apply to people younger than 60 who were at high risk of heart disease and for whom a new daily regimen of the mild analgesic might have been a tool to prevent a first heart attack or stroke. The proposed guidelines would not apply to those already taking aspirin or those who have already had a heart attack.

The U.S. task force also wants to strongly discourage anyone 60 and older from starting a low-dose aspirin regimen, citing concerns about the age-related heightened risk for life-threatening bleeding. The panel had previously recommended that people in their 60s who were at high risk for cardiovascular disease consult their doctors to make a decision. A low dose is 81 milligrams to 100 milligrams.

The task force proposals follow years of changes in advice by several leading medical organizations and federal agencies, some of which had already recommended limiting the use of low-dose aspirin as a preventive tool against heart disease and stroke. Aspirin inhibits the formation of blood clots that can block arteries, but studies have raised concerns that regular intake increases the risk of bleeding, especially in the digestive tract and the brain, dangers that increase with age.

“There’s no longer a blanket statement that everybody who’s at increased risk for heart disease, even though they never had a heart attack, should be on aspirin,” said Dr. Chien-Wen Tseng, a member of the national task force who is the research director of family medicine and community health at the University of Hawaii. “We need to be smarter at matching primary prevention to the people who will benefit the most and have the least risk of harms.”

Research shows that the increased risk of bleeding occurs relatively quickly after someone begins regular use of aspirin.

Those who are already taking baby aspirin should talk to their doctor.

“We don’t recommend anyone stop without talking to a clinician, and definitely not if they have already had a heart attack or stroke,” she added.

The task force includes 16 experts in disease prevention and evidence-based medicine who periodically evaluate screening tests and preventive treatments. Members are appointed by the director of the federal Agency for Healthcare Research and Quality, but the group is independent and its recommendations often help shape U.S. medical practice.

The guidelines, which are not yet final, have the potential to affect tens of millions of adults who are at high risk for cardiovascular disease, which continues to be the leading cause of death in the United States, even in the age of Covid. The panel will accept public comments on its recommendations until Nov. 8, although its draft guidance is usually adopted.

Two years ago, the American College of Cardiology and American Heart Association had jointly narrowed their recommendations to say aspirin should be prescribed very selectively for people ages 40 to 70 who had never had a heart attack or stroke. On aspirin, the organizations say “generally no, occasionally yes,” for primary prevention. That advice differs from the task force’s new draft guidance for a cutoff at age 60.

“When we looked at the literature, most of it suggested the net balance is not favorable for most people — there was more bleeding than heart attacks prevented,” said Dr. Amit Khera, one of the authors of the medical groups’ guidelines. “And this isn’t nose bleeds, this can be bleeding in the brain.”

And as long ago as 2014, a Food and Drug Administration review concluded that aspirin should not be used for primary prevention, such as to ward off a first heart attack or stroke, and noted the risks.

The task force, which previously made a universal recommendation for high-risk adults in their 50s to take baby aspirin if their odds of a side effect were low, now proposes that high-risk adults in their 40s and 50s talk to their doctors and make an individual decision about whether to begin a daily regimen. (The panel defined “high-risk” as anyone who has a 10 percent or greater risk of a cardiovascular event over the next 10 years, according to American College of Cardiology/American Heart Association calculators used to estimate risk.)

When the task force issued its last set of recommendations in 2016 endorsing the widespread use of aspirin for primary prevention for those at high risk, and saying that the benefits outweighed the risks, some critics said the panel had made a mistake. Dr. Steven Nissen, chair of cardiology at the Cleveland Clinic, said then that he was concerned more aspirin use would do more harm than good. Gastroenterologists said they feared patients taking aspirin would skip their colon cancer screenings.

The first large national clinical trial to find that aspirin cut the risk of heart attack included only male doctors, and it was stopped early, after five years, because the benefits were dramatic and appeared to greatly exceed the risks. But that was in 1988, and medical practice has evolved since then, said Dr. Donald M. Lloyd-Jones, president of the American Heart Association.

With people now better able to control risk factors like high blood pressure and using new drugs to keep cholesterol in check, “there is less room for aspirin now to make a difference,” Dr. Lloyd-Jones said. But, he said, “There is still the risk of bleeding.”

Research studies have also indicated that even though aspirin use by people who have not had a heart attack or stroke reduces the risk of those events, it does not lower the number of deaths from heart disease or other causes.

The national task force draft report also questions another use of aspirin, whether it reduces the risk of colorectal cancer, one of the leading causes of cancer deaths in the United States and which has been on the rise among younger adults for reasons that aren’t clear.

In reversing its five-year-old endorsement of aspirin to help prevent colorectal cancer, the report pointed to new data from a randomized controlled study called Aspirin in Reducing Events in the Elderly. In that study, aspirin use was linked to an almost doubling of colorectal cancer deaths after nearly five years of follow-up.

Some experts have not given up on the promise of aspirin, saying there is still “compelling evidence” for its role in cancer prevention.

Dr. Andrew Chan, director of cancer epidemiology at Mass General Cancer Center, said randomized controlled trials show that aspirin inhibits the growth of polyps in the colon and reduces the odds that they will become cancerous.

“This again highlights that we need to think about personalizing who we give aspirin to, and move away from a one-size-fits-all solution,” Dr. Chan said.

Omicron Is a Dress Rehearsal for the Next Pandemic 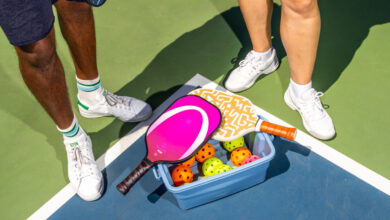 Pickleball, Sport of the Future Injury?