What is the Omicron variant?

First identified in Botswana and South Africa, this new iteration of the coronavirus has prompted concern among scientists and public health officials because of an unusually high number of mutations that have the potential to make the virus more transmissible and less susceptible to existing vaccines.

The World Health Organization has called Omicron a “variant of concern” and on Monday warned that the global risks posed by it were “very high,” despite what officials described as a multitude of uncertainties. Cases have been identified in more than a dozen countries, among them Britain, Italy, Belgium and the Netherlands. Although Omicron has not yet been detected in the United States, experts say it is only a matter of time before the variant shows up.

Should we be worried?

Omicron’s discovery has prompted considerable panic across the globe, with a number of countries banning flights from southern Africa, or — like Israel, Japan and Morocco — barring entry of foreign travelers altogether.

But public health experts have urged caution, noting that there is as yet no firm evidence that Omicron is more dangerous than previous variants like Delta, which quickly overtook its predecessors in the United States and other countries.

Although Delta turned out to be much more transmissible than prior variants — and there is some data suggesting it can cause more severe illness in the unvaccinated — there is little evidence it is more lethal or capable of outsmarting vaccines.

Much remains unknown about Omicron, including whether it is more transmissible and capable of causing more serious illness. There is some evidence the variant can reinfect people more readily.

There are early signs that Omicron may cause only mild illness. But that observation was based mainly on South Africa’s cases among young people, who are less likely overall to become severely ill from Covid.

Dr. Angelique Coetzee, who chairs the South African Medical Association, said that the nation’s hospitals were not overwhelmed by patients infected with the new variant, and most of those hospitalized were not fully immunized. Moreover, most patients she had seen did not lose their sense of taste and smell, and had only a slight cough.

On Tuesday, Regeneron said its Covid antibody treatment might be less effective against Omicron, an indication that the popular and widely beneficial monoclonal antibody drugs may need to be updated if the new variant spreads aggressively.

That said, Omicron’s emergence is so recent that it may be a while before experts know whether it is more pathogenic. Covid hospitalizations lag new infections by two weeks or more. 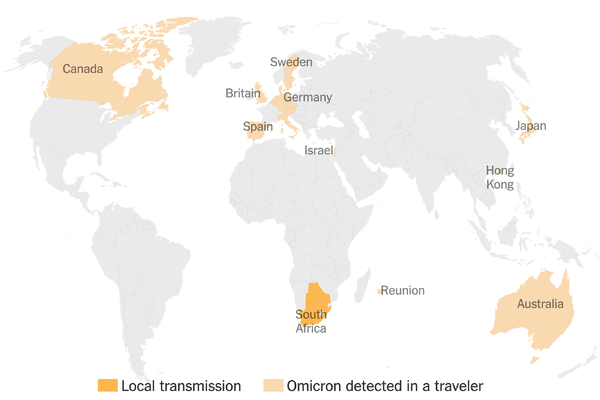 Tracking Omicron and Other Coronavirus Variants

See which countries have reported cases of the Omicron variant.

Scientists expect to learn much more in the coming weeks. At the moment, they say there is no reason to believe Omicron is impervious to existing vaccines, although they may turn out to be less protective to some unknown degree.

There’s another reason to remain calm: Vaccine makers have expressed confidence they can tweak existing formulations to make the shots more effective against new variants.

Staff members standing  before an arrivals information board at Haneda International Airport in Tokyo. A number of countries banned flights from southern Africa or, in the case of Israel, Japan and Morocco, barring entry of foreign travelers altogether.Credit…Franck Robichon/EPA, via Shutterstock

Why are scientists so concerned about Omicron?

As the coronavirus replicates inside people, new mutations constantly arise. Most provide the virus with no new advantage, but sometimes mutations can give the pathogen a leg up by allowing it spread more readily among its human hosts or dodge the body’s immune response.

Researchers in South Africa sounded the alarm because they found more than 30 mutations in the spike protein, a component on the surface of the variant that allows it to bind to human cells and gain entry to the body. Some of the samples from Botswana shared about 50 mutations throughout the virus not previously found in combination.

The spike protein is the chief target of antibodies that the immune system produces to fight a Covid-19 infection. Having so many mutations raises concerns that Omicron’s spike might be able to somewhat evade antibodies produced by either previous infection or vaccination.

Those mutations also raise the prospect that the variant will reduce the efficacy of monoclonal antibody treatments — a fear partly confirmed on Tuesday with Regeneron’s announcement.

Still, it is worth remembering the fate of earlier variants that stirred concern: Beta and Mu, for example, evolved the ability to partially evade the body’s immune defenses, but they never became a serious threat to the world because they proved to be poor at transmitting.

Vaccines are expected to provide some protection against Omicron because they stimulate not only antibodies but other immune cells that attack virus-infected cells. Mutations to the spike protein do not blunt that response, which most experts believe is instrumental in preventing serious illness and death.

Citing the potential for waning immunity six months or more after vaccination, some health experts are promoting booster shots to increase antibody levels.

The Omicron variant. The latest variant was identified on Nov. 25 by scientists in South Africa, though Dutch officials later said two cases were detected in the Netherlands days earlier. As experts race to learn more, it’s still unclear if the variant leads to severe illness and how effective vaccines will be against it.

Travel restrictions and lockdowns. As more Omicron cases emerge globally, countries are responding in varied ways. Japan joined Israel and Morocco in barring all foreign travelers, and Australia delayed reopening its borders for two weeks. Here’s a list of where U.S. citizens can travel right now and what to know about travel restrictions.

What officials are saying. President Biden sought to reassure the U.S. on Monday, telling Americans that the variant is “a cause for concern, not a cause for panic.” W.H.O. officials warned that the global risk posed by Omicron was “very high”, and the C.D.C said all adults “should” get booster shots.

Economic impact. After a solid rally on Monday, global markets were sliding again on Tuesday amid new concerns over the ability of current vaccines to control the variant. Jerome Powell, the Federal Reserve chair, will tell lawmakers on Tuesday that Omicron creates more inflation uncertainty.

Moderna, Pfizer-BioNTech and Johnson & Johnson, makers of vaccines approved for use in the United States, and AstraZeneca, which is widely used in Europe, have all said they were studying Omicron, and they expressed confidence in their ability to tailor their formulations to target the variant.

Why is it called Omicron?

When the W.H.O. began to name emerging variants of the coronavirus, they turned to the Greek alphabet — Alpha, Beta, Gamma, Delta and so on — to make them easier to describe. The first “variant of concern,” Alpha, was identified in Britain in late 2020, soon followed by Beta in South Africa.

But veterans of American sorority and fraternity life might have noticed the system has skipped the next two letters in the alphabetical order: Nu and Xi.

Officials thought Nu would be too easily confused with “new,” but the next letter, Xi, is a bit more complicated. W.H.O. officials said it was a common last name, and therefore potentially confusing. Some noted that it is also the name of China’s top leader, Xi Jinping.

A spokesman for the W.H.O. said organization’s policy was designed to avoid “causing offense to any cultural, social, national, regional, professional, or ethnic groups.”

Next in line? Omicron. (Here’s how it’s pronounced.)

I’m fully vaccinated — I’ve even had my booster. So why should I care about Omicron?

Like Delta, which was first identified in India, the rise of yet another worrisome variant in the developing world points to a more fundamental problem facing the global community more than a year-and-a-half into the pandemic.

The hoarding of vaccines by wealthy countries while poorer nations struggle to obtain them provides more opportunities for SARS CoV-2 to replicate and mutate among the unvaccinated. More mutations mean there are more chances for the virus to become more infectious, immune-resistant or lethal.

And as the rapid spread of Delta showed, a dangerous new variant is unlikely to remain in one place for very long.

The risks extend beyond public health. The resulting economic devastation from a new variant can hit affluent countries nearly as hard as those in the developing world. One academic study estimated trillions of dollars in economic loss to wealthy countries when residents of poorer countries remain largely unvaccinated.

In recent days, the cascade of travel restrictions prompted by Omicron’s emergence has triggered resentment among Africans, who believe the continent is yet again bearing the brunt of panicked policies in Western countries that have failed to deliver vaccines and the resources needed to administer them.

On Tuesday, Tedros Adhanom Ghebreyesus, head of the W.H.O., described the travel bans as unfair and counterproductive. “I well understand the concern of all countries to protect their citizens against a variant that we don’t yet fully understand,” he said.

“But I am equally concerned that several member states are introducing blunt, blanket measures that are not evidence-based or effective on their own, and which will only worsen inequities.”

First, Impressive Vaccines for Covid. Next Up: The Flu.

Antiviral Covid Pills Are Coming. Will There Be Enough Tests?

‘Covid toes’ may be caused by a powerful immune response, a new study finds.