THE 1960S CLOTHING designer Paco Rabanne was an unrepentant optimist. His chain-mail halter tops and micro-mini shifts strung together from metallic paillettes reflected the dream of a cleaner, cheerier planet — either ours or one far away. While today’s fashion futurism tends to be dystopian — somber cloaks, thigh-high black latex boots — the Basque-born Rabanne envisioned the world to come as groovy and expansive.

Bastien Daguzan, 37, who has been the chief executive of Paco Rabanne for four and a half years (the founder, 87, retired in 2000), is an optimist, too, both by nature and as a result of his early success; raised in France’s rural southwest, he became the managing director of Christophe Lemaire’s namesake company before he turned 30. Paco Rabanne, owned by the Spanish conglomerate Puig, has thrived under Daguzan’s leadership, with the 39-year-old creative director Julien Dossena, who arrived eight years ago, often showing colorful clothing embellished with metal and plastic elements that evoke the intergalactic playfulness of the label’s early days.

In the hallway, a vintage Turkish Oushak runner, a painting by Frédéric de Luca and a 1960s Bonanza stool by Esko Pajamies.Credit…Yvan Moreau
The bathroom features an ivory lacquered bathtub and a resin floor in a similar hue.Credit…Yvan Moreau

For Daguzan and his French-Argentine husband, Nicolas Gabrillargues, the 37-year-old women’s accessories collection director for Louis Vuitton, this belief in a buoyant future is expressed through their love for interior design: They frequently buy and renovate apartments, sometimes staying only a year or two before taking on their next project. Each home is a step in their aesthetic evolution as they careen through centuries of architectural history and combine Paris’s ancient buildings with streamlined Modernism and artifacts from other continents and cultures. “We like the sense we are always moving forward,” Daguzan says. In January 2020, they bought an 1,800-square-foot one-bedroom duplex carved out of a section of a vast 17th-century former hôtel particulier in the Marais, directly on the Seine. Outside, the animated neighborhood vibrates; inside, all is hushed elegance, as it was in the 1870s, when the belle epoque watercolorist Henri Toussaint painted the mansion.

Much of the building’s original interior detailing had been lost: None of the Louis-era moldings, elaborate boiserie or chevron floors remained. Instead, the floors of the apartment were concrete, the walls blank plaster. But the couple found that bareness alluring. Their last apartment, in the 10th Arrondissement, had been a perfect Haussmannian capsule, and Daguzan was tired of typical Parisian style. “The idea that you could live in a building so historic and yet not be tied to that,” he says. “That’s liberation.” Besides, this new project seemed perfect for Fabrizio Casiraghi, a 35-year-old Paris-based designer and friend of Daguzan’s with whom he had long hoped to collaborate. Both like interiors that mix high and low and incorporate flea-market treasurers — a floral still life, a vintage bar cart — alongside signature pieces from established designers like Jean-Michel Frank and Pierre Paulin.

Although Paris has plenty of shops that sell exquisite antique details, fittings and wall panels for those who restore historic apartments, the men instead followed the template that Casiraghi has become known for, creating a space that feels like it’s been in a family for generations, each successive heir leaving their mark, gracefully incorporating the past while enfolding the future. “Our idea is that perhaps the grandparents were there in the 1940s and some of their furniture is there, then the parents in the ’70s left some of those cool things and now that has all been transformed by the younger generation,” Casiraghi says.

TODAY, THE LOFTLIKE flat doesn’t feel Parisian; it could be in New York’s SoHo or Berlin’s Kreuzberg. But what it lacks in vernacular charm, Daguzan and Casiraghi — who began his career in his hometown, Milan, with Dimore Studio — have compensated for by evoking a 20th-century mélange, meshing the fluid lines of late Art Deco with the merlot-and-forest-green-tinted Orientalism that the fashion designer Yves Saint Laurent favored in his own interiors.

The dining space, with lacquered barrel chairs and a pendant by Hoffmann, is open to the kitchen. Up a set of stairs is a den loft.Credit…Yvan Moreau
One of the cloudy metal columns designed by Casiraghi, with a vintage bar cart in front.Credit…Yvan Moreau

The corner apartment’s quirky layout — common when a grand house has been divided up — accentuates the unorthodox design choices. The ground-level entrance, with floors tiled in black-and-white checkerboard (one of the few nods to Parisian tradition), leads to a giant rectangular carpeted bedroom. The bed, covered in a fawn-and-beige patterned vintage Hermès throw, sits on a 17-inch platform that bisects the room, “giving the illusion of separate space without any walls,” Casiraghi says. Near the door, a lamp by the Austrian-born midcentury architect Josef Frank hangs above a round Pierre Paulin Pumpkin chair in off-white bouclé wool. Next to the door, the black-tiled bathroom pays homage to Villa Necchi Campiglio, the rationalist mansion in Milan designed in the 1930s by Piero Portaluppi and made famous in Luca Guadagnino’s 2009 film, “I Am Love”: The curved lacquered white fixtures contrast against the ebony walls like a 1950s abstract painting.

The main floor, up a steep open staircase, is even more dramatic because of its high-ceilinged vastness and its evocation of the past century’s most glamorous periods. On the wall that joins the two levels, there’s a 6.5-by-10-foot tapestry in shades of ocher, black, marigold and maroon made in the 1950s from an original design by the Spanish Surrealist Joan Miró; it evokes the 1928 oversize Fernand Léger canvas that Saint Laurent placed in the salon of his 1970s-era apartment on the Rue de Babylone. Gargantuan lanterns, produced by the Austrian company Woka according to Josef Hoffmann’s original 1917 design for the fabric department of the Wiener Werkstätte, hang from the 15-foot ceilings, creating a souklike intimacy. Using waist-high bookshelves as subtle room dividers, Casiraghi broke the space into a living room and dining area with an open kitchen; the floors throughout are covered in coco matting, then layered with Chinese Art Deco carpets. The vintage Florence Knoll dining table is surrounded by deep green lacquered half-barrel chairs by Hoffmann and, on one wall, near a pair of Deco club chairs reupholstered in marigold wool, hang two huge wooden box sculptures, picked up at the flea market. “Sometimes you fall in love with a Picasso,” says Casiraghi, “and sometimes it’s just a shape.” 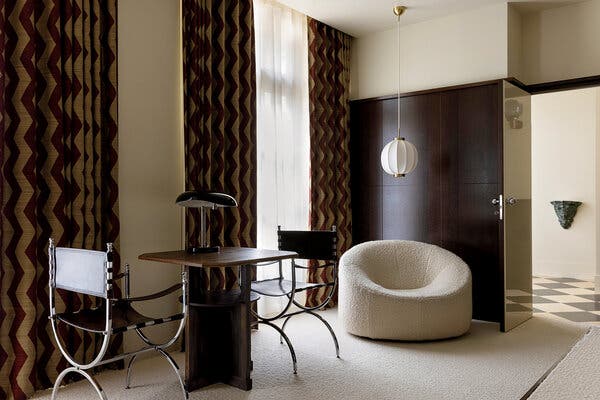 In the bedroom, a pendant lamp by Josef Frank from Svenskt Tenn hangs over a Pumpkin armchair by Pierre Paulin, and a pair of Maison Jansen Savonarola chairs flank an Art Deco oak table.Credit…Yvan Moreau

Perhaps the flourish that best conveys how Casiraghi and Daguzan embraced an origin story for the home is the series of shallow, squared-off floor-to-ceiling matte metal columns — they resemble chic ventilation shafts — built along the room’s walls. None of the ornate original plaster columns may have survived, but why not pretend they had and just needed to be updated with a modern shell in steel, which happened to be one of Rabanne’s favorite materials? Another inspiration was Betty Catroux, the Brazilian model and muse of Saint Laurent: In 1970, she and her husband, the designer François Catroux, clad the fireplace surround of their Paris apartment in the same metal. To soften the columns’ industrial feel, Casiraghi hung them with small framed oils and carved masks, some found at the Clignancourt flea market, others from galleries or from Daguzan and Gabrillargues’s previous apartments. Mixed into the array is a 1960s lithograph by the Argentine-born artist Lucio Fontana. The effect is charming, even a little sentimental, as though the men had made a place for their parents’ and grandparents’ objects while still staying true to their own vision. “There is a line between glamour and honesty, a kind of joy of being true to yourself, and you want to walk that,” says Casiraghi. “Most of all, you don’t want to be pretentious. Pretension is death.”

A New Line of Face Oils, Made With Well-Loved Plants

How to Do a Voice-Over

Searching for Plato With My 7-Year-Old

He Had Severe Abdominal Pain and a Fever. It Wasn’t Food Poisoning.