UNTIL THEY VISITED Tangier for the first time in 2004, Jamie Creel and Marco Scarani, the co-owners of Creel and Gow, a cabinet de curiosités-like shop on Manhattan’s Upper East Side with an outpost upstate in Millbrook, N.Y., had no intention of buying a vacation house in Morocco, much less one of the most storied residences in town. Ever since 1997, when they met the legendary interior designer Charles Sevigny in Paris, then in his late 70s and best known for his midcentury work with Knoll, they had been putting off a visit to the northern Moroccan city where Sevigny spent much of his time. The duo, now 55 and 49, respectively, always thought they were too young to enjoy Tangier’s expat enclave of eccentric aesthetes. “It was the last place we imagined ourselves,” says Scarani.

But the Massachusetts-born Sevigny was ultimately a force that couldn’t be denied. And his house, called Dar Zero, proved irresistible as well. By the time they gave in to his entreaties to stay with him at the whitewashed riad-style townhouse arrayed with rich textiles and antique filigreed metal lanterns, the designer was 84 and having a hard time keeping up with the demands of owning a 300-year-old home. Thirteen months after the couple first walked through the cozy, well-proportioned rooms of Dar Zero, they bought it, with the understanding that Sevigny would live out his days there alongside them. “Before we went to Tangier, we had been planning to buy a vacation home on Patmos,” Scarani says, “but that all fell away.” For nearly 15 years, Creel and Scarani spent each Easter and most summers with the designer at Dar Zero. In the earlier days, the older man was able to get around; in his final ones, he was largely confined to his second-floor bedroom with views of the medina and the bay. He died in August 2019, just a year after he made a grand appearance at the lavish 100th birthday party Scarani and Creel threw for him on the house’s rooftop terrace. “He was like our father,” says Scarani. “People told us we gave him a second life, which was so important to us.”

A view of the second-floor terrace off the main bedroom, where plumbago, bougainvillea and a centuries-old fig tree rise from the courtyard below.Credit…Simon Watson
In the kitchen, various styles of mashrabiya, carved wooden latticework traditional to North Africa and the Middle East, have been inset into the lower cabinets, while the backsplash is hand-painted zellige tiles.Credit…Simon Watson
On the other side of Place de la Casbah sits the remains of York Castle, the entrance to which is pictured here. Named after the English Duke of York in the 1660s, the castle’s last resident was Sevigny, who moved to Dar Zero when the building fell into ruin.Credit…Simon Watson
A collection of mounted yamur, traditional Moroccan brass minaret spires, is mounted on the roof terrace behind the swan’s neck agave.Credit…Simon Watson

SEVIGNY’S FIRST LIFE had been inarguably spectacular; he was not merely a resident of Tangier but its fulcrum. For decades, starting in the early 1960s, he and his companion, Yves Vidal, the president of Knoll International, who died in his late 70s in 2001, had been allowed by local authorities to inhabit York Castle, a crenelated 16th-century building on the edge of the Casbah, the military fortification on a promontory above the city. Built by the Portuguese and renamed in honor of the Duke of York during Tangier’s short British occupation in the late 17th century, the citadel was included with the rest of the city in the dowry of Catherine of Braganza, the Portuguese princess who married Charles II in 1662.

Sevigny and Vidal meticulously reimagined the vast structure, making it a gallery of sorts for Knoll’s wares. Preserving the Moorish idiom, Sevigny decorated the spaces with Eero Saarinen Tulip chairs and the spidery metal pedestal tables of Warren Platner (they did the same at Le Moulin des Corbeaux, their home outside of Paris, a converted 15th-century mill where they paired Ludwig Mies van der Rohe’s Barcelona chairs with Aubusson tapestries). In a few spots, they left holes in the fresh plaster exposing the original walls, some of which contained the markings made by prisoners held by pirates after the British had gone. Sun streamed through the scrolled grates in the arched windows, casting shadows on their collection of local ceramics and silk embroidered cushions.

The three side tables in the living room featuring mashrabiya and muqarnas, a form of intricate vaulting, once belonged to Sevigny and Vidal’s friend Barbara Hutton, who lived nearby.Credit…Simon Watson
The lush courtyard is furnished with wrought-iron klismos chairs and a round table.Credit…Simon Watson 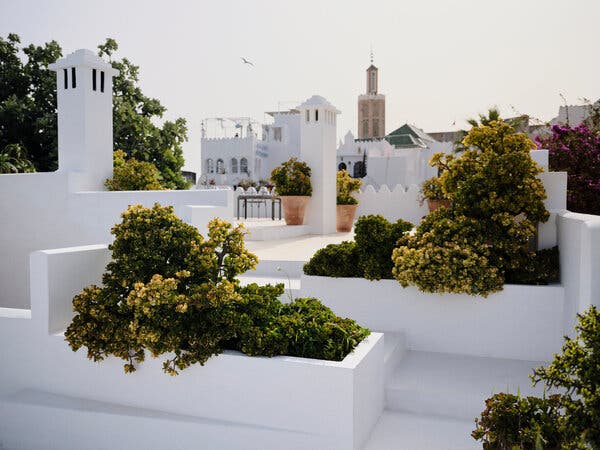 On the terrace, which overlooks the Casbah square, succulents thrive in the built-in, whitewashed planters that were added when the roof was redone.Credit…Simon Watson

A painting by Ira Belline, an artist who came to Tangier as the personal secretary to Hutton, is hung with red ribbon in the primary bedroom. Fabric from Michelle Nussbaumer was used for the window and bed curtains.Credit…Simon Watson
A deep canary yellow brings light into the terrace guest room that the couple have affectionately named the Ariel de Ravenel Room after their friend who visits frequently.Credit…Simon Watson

To accommodate the constant stream of guests, the couple purchased Dar Zero, the ramshackle house next door. Built at the turn of the 18th century, its address is 0 Place de la Casbah, which underscores its central location in the modern incarnation of the medina. Since about a decade after the end of World War I, Dar Zero had been occupied by a series of expats: The British novelist Richard Hughes, whose “A High Wind in Jamaica” (1929) likely influenced William Golding’s “Lord of the Flies” (1954), bought it in 1930, reportedly for two donkeyloads of silver. He bequeathed it later that decade to Jim Wyllie, an eccentric British landscape painter and friend of the Beats. It was Wyllie who sold it to Vidal and Sevigny: In a deal reminiscent of the one that Creel and Scarani would later strike, they let him live there until his death in the late ’80s. By then, the building was so badly deteriorated that Wyllie slept with an umbrella over his bed.

Sevigny and Vidal restored the structure, keeping its architecture intact. In the courtyard, they preserved the giant gnarled fig tree, installing around its base handmade terra-cotta bejmat tiles from Fez with glazed green zellige pieces to form star patterns. Sevigny evoked the Moorish vernacular of York Castle by creating a keyhole-arch doorway set within a square frame, enclosed an open corridor and laid wooden floors — a rarity in damp Tangier — to connect the cadmium-hued library and dining room to the kitchen that replaced the one outdoors. On the second floor, he added a primary bedroom with a terrace that connects to the courtyard below by way of a zellige staircase, which winds around the tree’s trunk.

Moroccan lanterns sit atop gray marble demicolumns, illuminating the openings between the entrance and the courtyard.Credit…Simon Watson
In the mustard yellow breakfast room, chairs designed by Sevigny sit around an early 1960s Knoll Tulip table under a traditional Moorish lantern. The cupboard, also designed by Sevigny, uses a notched trellis backed with mirror to create a mashrabiya effect.Credit…Simon Watson
The salon, part of Creel and Scarani’s extension, features fabrics from Lisa Fine and pillows by Carolina Irving, while the aubergine slipper chairs are by Madeleine Castaing. On the back wall, a Qajar painting of a woman hangs beside a cabinet de curiosités niche designed by Scarani.Credit…Simon Watson

The couple’s attention to the house proved fortuitous. In the late 1990s, after a long bout of drought and floods, York Castle’s foundations began to crumble. The couple sold most of their furniture and moved full time to Dar Zero. A few years later, Vidal died, leaving Sevigny to care for the house, which had grown to about 3,000 square feet. By then, Creel and Scarani’s appearance seemed providential: “Of course, other people wanted to buy it,” says Scarani, “but Charles wanted to make sure it was in the hands of people who had the same values and aesthetic.”

WHILE SEVIGNY WAS alive, Creel and Scarani were loath to change much or do construction inside the original house, for fear of disturbing him. But they purchased a neighboring residence, which they tore down and rebuilt as an extension that was completed in 2018. Since his death, they have sought to both honor the designer’s intentions and put their own mark on the place, which now comprises 6,500 square feet. While most of its previous owners’ furniture remains in the original rooms, the spaces needed to be refreshed. The dashes of ocher in the dining and breakfast rooms had faded, so the pair repainted the accents in a more saturated marigold; they added new kitchen tiles to punctuate the expanses of white plaster with jolts of Kelly green and pomegranate. Nonetheless, the decoration remains minimal, as Sevigny intended, anchored by some of his most valued possessions, including a set of zellige inlaid octagonal tables from Sidi Hosni, the nearby palace once owned by Sevigny and Vidal’s friend Barbara Hutton.

The library-cum-dining room features an intricately carved wall panel door hung with art and objects from Sevigny and Vidal’s collection and a sofa upholstered in Michelle Nussbaumer’s Fez fabric.Credit…Simon Watson
In the atrium off the salon, a Casa Tosca Cosmo table and vintage rattan chairs are surrounded by giant white birds of paradise, honeysuckle and other plants, along with a wire sculpture by the artist Marie Christoph and a shell tapestry from the island of Sumba in Indonesia.Credit…Simon Watson
The marigold headboard of the four-poster bed in one of the guest rooms was designed by Sevigny, while the patchwork tapestry, used here as a quilt, is from the late artist “Gipi” de Richemont Salvy. Both the curtain and club chair fabric come from Lisa Fine.Credit…Simon Watson

The couple redid Sevigny’s bedroom for themselves, with red embroidered point de Fez Roman blinds and a curtained bed by a local ironworker. Sevigny’s Saarinen Womb chair, one of the pieces he salvaged from the castle, has been reupholstered in red wool tweed from a local store in the medina. In order to deal with the inevitable decay wrought by the humid climate, Sevigny had taken to repainting many of the outdoor objects in black, so Scarani and Creel are still peeling back layers of paint to discover original patinas. The staff quarters have been transformed into a marble-lined hammam. In the extension, Creel and Scarani created an airy salon for gatherings; it features a large built-in banquette upholstered in cornflower blue paisley fabric by Lisa Fine, and ruby and cobalt pillows by Carolina Irving. There is also a new open-air atrium just off the salon, in which birds of paradise, honeysuckle and gardenia flourish.

Still, Sevigny’s choices remain throughout, living on as perpetual inspiration: backlit wooden mashrabiya mirrors; ziggurat windows; the carved paneling from York Castle on the walls of the library; and wooden parapets on the terraces. “I always feel his presence here, every time I touch something or alter it,” Scarani says. “Each owner has enlarged this house and changed it. But what’s amazing is that everything we’ve done makes it feel more like the place he wanted it to be.”

Tags
Des House They Which Who

Who Is the Bad Art Friend?

The T List: Six Things We Recommend This Week

Poem: We Feel Now a Largeness Coming On