The fashion designer Brunello Cucinelli grew up in an ancient stone farmhouse outside the town of Castel Rigone in Umbria, Italy. It didn’t have electricity or running water and, as it was shared among 13members of the extended Cucinelli family, could feel a bit crowded. Still, “it’s a house that is beautiful to me,” says Cucinelli, 68, who has fond memories of playing with his siblings and cousins in the kitchen’s cavernous fireplace, and of slipping downstairs to the cow stables before school to steal milk directly from the source.

In some ways, Cucinelli’s life now, as the C.E.O. and creative director of his namesake fashion brand, is miles away from that farmhouse. And yet he says his years there instilled in him the values, namely a love of family and an appreciation for curiosity and hard work, that he still holds dear. He hasn’t gone far geographically, either. About 14 actual miles south of Castel Rigone lies Solomeo, a medieval hamlet that, since 1982, has served as Cucinelli’s home and, since 1985, as his business headquarters. He first visited the town as a teenager intent on wooing his now-wife, Federica Benda, who was born and raised there. (They first met as passengers on the same school bus.) “I would hang around just to be seen by her,” he says with a smile. Cucinelli founded his brand, which started out producing dyed cashmere and wool sweaters for women, while the couple were engaged and, once they’d married and after a stint living in the nearby village Ferro di Cavallo, he joined Benda in Solomeo for good. 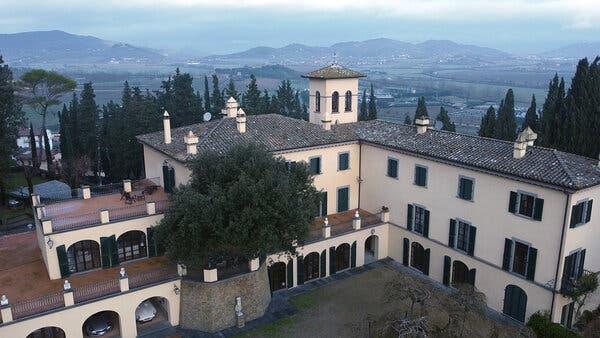 Since then, the brand, which went public in 2012, has expanded into most continents and realms of retail, including children’s clothing and home décor, though it’s best known for softly tailored, meticulously crafted sports coats and separates that are particularly popular among the Silicon Valley crowd. Throughout it all, though, it’s been nearly impossible to separate the label from Solomeo. Nearly 10 percent of the village’sresidents work for the brand in some capacity, a model that recalls Europe’s erstwhile craft guilds. And Cucinelli has left his mark on the architecture of the town, too. Upon moving there, he renovated Solomeo’s 14th-century stone castle, which, for a time, held the brand’s main offices. In 2008, a public theater commissioned by Cucinelli and designed in the style of a Renaissance playhouse opened in Solomeo — a concert of Handel’s early work is scheduled for March — and he later established an industrial park for the brand in the valley below the town, complete with an olive grove, fruit orchards and vineyards.

The villa’s primary bedroom, with a bed dressed in blankets and cashmere cushions from the Brunello Cucinelli Lifestyle Collection.Credit…Marco Mucig

A few streets away from the town’s center, on the edge of a hill, is Cucinelli and Benda’s home, a three-story 17th-century villa, with a cream-colored facade and a terra-cotta tile roof, originally constructed for a noble family. This, too, was a project for Cucinelli. The couple purchased the nearly 250-acre, cypress tree-dotted property, which also encompasses a small chapel, in 1990, and Cucinelli ended up spending four years renovating it according to quintessential Umbrian country style, carefully restoring the stone floors, vaulted ceilings and wide arched windows. When it came to furnishing the rooms, he opted for wooden antiques such as a 16th-century bookcase carved with Greek columns for the library, a sturdy 15th-century table and chairs for the dining room and comfortable, overstuffed sofas in the same neutral palette of creams, whites and browns that have come to define the Brunello Cucinelli look. “I tried to keep in mind the words of the great teachers who have advised us to listen to the genius loci, or the soul or spirit of a place,” Cucinelli says of such thinkers as Vitruvius and Andrea Palladio.

Though Cucinelli didn’t study much growing up, in his adult years he became a voracious autodidact, and over 3,000 titles line the heavy wooden shelves of his library. The room also has a fireplace, and Cucinelli likes to curl up there with a book each night before bed, taking notes as he goes. He pays further tribute to his historical heroes via white Carrara marble busts that are on display throughout the house and grounds. The library, for instance, has likenesses of Marcus Aurelius, Alexander the Great and Sappho, while such Renaissance men as Galileo and Leon Battista Alberti keep company on the terrace. Cucinelli has also commissioned busts of modern men, including Nelson Mandela and Barack Obama. Each of the works is hand-carved by the artisan Stefano Giannoni in Pietrasanta, Tuscany, who works with marble from the same quarries that once supplied Michelangelo. The men have been collaborating for 23 years and, at present, Giannoni has enough commissions from Cucinelli to keep him busy until 2026.

This sort of longstanding relationship is unsurprising to anyone who knows Cucinelli personally. So much of his life is guided by consistency, down to his daily routines. “Our family has hundreds of rituals,” he says. Every Sunday, for example, he wakes up at 6:30 in the morning and walks to a local pastry shop, where he buys a package of flaky, freshly baked brioches for each household in his family: his daughters, Carolina and Camilla, and their families both live within walking distance, as does Cucinelli’s father, Umberto, who will turn 100 next month. Cucinelli leaves a bag on each of their door handles, then continues on home. Other habits can be traced back to his childhood: He and Federica grow their own vegetables in the villa’s garden, and keep rabbits and chickens. Their grandchildren help collect the eggs, just as Cucinelli did as a boy. Also, Cucinelli prefers to pass the evenings without electric lamps. “In the night I live by candlelight,” he says. “I sit in front of the fireplace in silence and get drunk on beautiful thoughts.”

How to Spot a Shooting Star

Judge John Hodgman on Letting the Dog Into the Bathroom

A Parisian Home That Breaks With Tradition