IN THE MID-1940s, while serving as the director of public works in Guadalajara, Mexico, the architect Rafael Urzúa Arias slated the first two houses he had ever designed for demolition in order to widen what would become one of the city’s main roads. When the homes were finally torn down in 1952, colleagues asked why he hadn’t chosen another street, a decision that might have better preserved his legacy. Urzúa, then 47, responded with a proverb: “El buen juez por su casa empieza” — “The good judge begins with his own home.”

By that point, Urzúa was retired, and had left Guadalajara to live in his hometown, Concepción de Buenos Aires, a tranquil village in the pleats of the Sierra del Tigre, some 50 miles south of the city. For the previous two decades, he’d built widely, one of four architects — along with Pedro Castellanos Lambley, Ignacio Díaz Morales and Luis Barragán Morfín — credited with founding the Tapatía school of architecture, from which an idiosyncratic regional style emerged in the 1920s, as Guadalajara grew into one of Mexico’s major urban centers. Of the four architects who reshaped the metropolis, Urzúa’s influence is perhaps the least obvious: He built a few houses, mostly in a regionalist aesthetic; several dignified blocks of working-class town homes; and, during his two terms in government, oversaw many important urbanization projects, from public parks and botanical gardens to roads that connected the historic center with new neighborhoods.

In one of the guest rooms, a reproduction of a Sacred Heart of Jesus painting and an Art Nouveau glass and brass lighting fixture over twin beds; the night stand and the bed on the left are made by the Mexican artist León Muñiz. The wood ceiling is painted indigo blue and poppy red and decorated with brass stars.Credit…Ana Topoleanu
In the old kitchen, Urzúa created a dining nook with a banquette and a cement and Cantera San Andrés stone table. A photographic reproduction of a José Clemente Orozco drawing was a gift by the artist to Urzúa.Credit…Ana Topoleanu

But if Urzúa is less known than his peers, that’s because his greatest works were made not in Guadalajara but in his hometown. From 1948 to 1987, Urzúa brought sewage, electricity and a paved road to Concepción de Buenos Aires. He renovated houses for neighbors, reorganized the century-old cemetery (the village was founded in 1869) and redesigned the cedar-shaded plaza. As Modernism reached its zenith in Mexico City and Guadalajara in the 1960s, he chose instead to design mission-style chapels with stucco walls and peaked terra-cotta roofs, their humble forms proportioned to blend in with the surrounding mountains.

“When I was a student, there was a lot of criticism that he built outside of his era,” says Urzúa’s 45-year-old grandson Agustín Elizalde Urzúa, an architect and product designer based in Guadalajara. But the elder Urzúa had no interest in what Modernism might have dictated. Instead, as Elizalde wrote in his 2006 monograph on his grandfather, his career constituted “an intimate, almost secret search to find harmony in the things around him.” 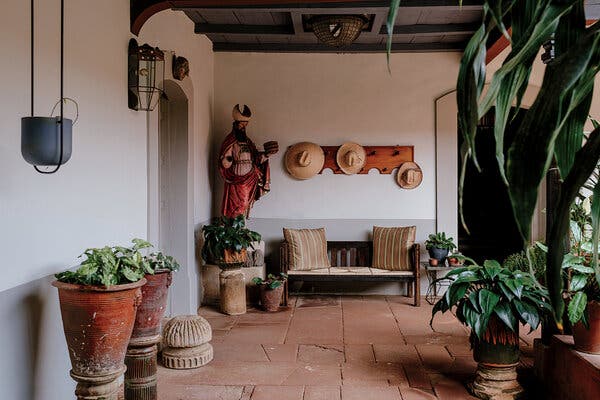 In one of the corridors on the main patio, clay pots, a wooden sculpture of Melchizedek and an early 20th-century wood and woven palm bench.Credit…Ana Topoleanu

NO PROJECT DISTILLED Urzúa’s preoccupations more completely than his own 9,192-square-foot home in Concepción de Buenos Aires. Built by his grandparents around the turn of the 20th century, the house has lime-slaked adobe walls; a terra-cotta roof; a shaded entryway called a zaguán that opens off the cobbled street; and a broad central courtyard circled by a parlor, an office, four bedrooms, a dining room and a kitchen. A consummate collector, Urzúa filled these rooms with relics of Guadalajara’s disappearing architectural heritage, including grinding stones from defunct village mills, 17th-century religious statuary and altar rails removed from the city’s Catholic churches after the Second Vatican Council.

After Urzúa’s death in 1991, his descendants used the home less and less, gradually surrendering whole rooms to decay and disrepair. Mold ate through the walls; the wooden columns that held up the 11-foot-deep interior verandas began to rot; downspouts that Urzúa had improvised from sardine cans rusted. During torrential summer storms, half the building would become uninhabitable. “When we fix the village house” became a familiar refrain. Then, in 2016, an attic beam broke, threatening the entire structure. The family knew they couldn’t wait any longer.

A glass lantern from the studio of Mauricio Preciado in the town of Tlaquepaque hangs over twin beds carved by Muñiz and topped with mauve bedcovers woven in Oaxaca for Estudio Pomelo.Credit…Ana Topoleanu
Glass, earthenware and ceramic pieces from the collection of María del Rosario Zambrano, Urzúa’s wife, line a set of shelves in the dining room.Credit…Ana Topoleanu

Despite his training as an architect, Elizalde had no desire to lead the project himself. He’d spent most of his career in interiors, designing restaurants in Puerto Vallarta and, more recently, housewares in collaboration with rural craftspeople. “I’m not a builder,” Elizalde says. “And especially in a project like this — my grandparents’ house, with lots of emotions involved, with a lot of expectations — it was complicated.”

So he asked his friend Francisco Javier Gutiérrez Peregrina, the 45-year-old director of COA Arquitectura in Guadalajara, to guide the renovation. A decade earlier, Gutiérrez had begun a master’s degree in historic restoration, but most of his work since then had consisted of private homes. Elizalde had watched Gutiérrez’s practice evolve over the years — the two became friends in 2005 while working on book projects for the state’s secretary of culture — and appreciated his rigor and humanity. “You can see that he cares about understanding his clients,” Elizalde says. “And this project wasn’t about just repairing damage. It was about preserving the house for the next generations.”

Earthenware pots in the home’s old kitchen are charred black from years of use over open flames. The painted tiles around the window were installed by Urzúa in the 1930s.Credit…Ana Topoleanu
A George Nelson pendant lamp hangs from a restored painted-canvas ceiling in the front gallery, which was formerly Urzúa’s studio.Credit…Ana Topoleanu

It took nearly a year for Elizalde and Gutiérrez to document every piece of pottery, artwork and furniture in the house, from elaborately carved neo-colonial tables and chairs by the artist León Muñiz, most of it commissioned by Urzúa after his 1940 marriage to María del Rosario Zambrano, to hand-painted tiles from the nearby village of Sayula, where such craft work has gone extinct. Meanwhile, Gutiérrez’s team measured every ceiling beam and cobbled hallway, assessing which parts of the house would need to be rebuilt and which could remain unchanged. “The question we had throughout the process was: ‘What does original mean?’” Elizalde says.

Rather than creating a museum or a memorial to Urzúa’s work, Gutiérrez describes the process as “a dialogue with preexistence,” leaving the marks of time visible wherever possible but focusing, above all, on making a livable home. In the 118-square-foot zaguán, for instance, Gutiérrez made virtually no adjustments, leaving the earthenware floor tiles intact, their emerald glaze worn down by a century of footfalls, a striking contrast to the electric shades of blue and coral that Urzúa used to paint the coffered ceiling some six decades ago. In the 344-square-foot kitchen, Gutiérrez built custom cabinetry from rosa morada, a tropical hardwood, and installed utilitarian countertops of hammered black granite. In the back of the property, behind the kitchen, he built a 700-square-foot guest apartment over the footprint of the former servants’ quarters. Here, rather than incorporating antiques from Urzúa’s collection, Gutiérrez and Elizalde relied upon contemporary furnishings from design firms like Supermorphe and Alvaluz, based in Guadalajara, inscribing a new era within the house’s thick mud-brick walls.

Agustín Elizalde Urzúa, the director of the Guadalajara-based design studio Estudio Pomelo and Urzúa’s grandson.Credit…Ana Topoleanu
An oil painting of Saint Augustine hangs over a wooden bed frame in the principal bedroom, which once belonged to Urzúa and his wife.Credit…Ana Topoleanu

At the core of the house is the 650-square-foot central courtyard, where the architects executed their most ambitious idea: Temporarily lifting the entire 10-foot roof of the veranda that surrounds the interior garden by four inches, they extracted four 33-foot crossbeams — each the length of a mature pine tree — and eight wooden columns in order to remake them from scratch, precisely recreating the building’s century-old structure. Planted with heliconias, calla lilies, begonias and bird’s-nest ferns, the garden now grows lush around a stone fountain flanked by a pair of metal dragons that Urzúa rescued from the mansard roof of Guadalajara’s first department store when it was torn down in the 1950s.

Each of these details, whether newly introduced or carefully preserved, bears the seal of Urzúa’s idiosyncratic vision of beauty: Some are decorative, like neo-Baroque finials added to the terra-cotta gables, while others are functional, like the indented baseboards of a deep concrete wash basin, ingeniously designed to make the faucets easier to reach — a choice that, at the time of its inception, would have gone unnoticed by anyone but the house’s staff.

In the dining room, a photograph of Michelangelo’s “David” hangs over a table covered in a pink cotton tablecloth designed by Estudio Pomelo and handwoven on a pedal loom in Oaxaca. The floor is made of early 20th-century vitrified clay tiles.Credit…Ana Topoleanu
The home’s formal corral, now used as a plant nursery, with an original cast-iron lantern designed by Urzúa hanging to the far left. The street lamps and wrought-iron balustrades, recovered by Urzúa from a demolition site in Guadalajara, were used for a time in Concepción’s central plaza and now await their next revival.Credit…Ana Topoleanu

In Urzúa’s aesthetic universe, there was no hierarchy between these elements of design, just as there was no hierarchy between time periods, between architectural styles, between city and village, discarded trash and potential treasure. The work — from his own home to pro bono projects scattered throughout the village and region — might have seemed anachronistic, but it was also forward-looking in its clever reuse of urban detritus, its democratic eclecticism, its commitment to community over personal legacy. Where so much Modernist architecture aimed to transform society, Urzúa wanted instead to reflect its joyful complexity. The good judge, as he once said, begins with his own home. Or, perhaps, the good judge doesn’t judge at all.

How Alienation Became My Superpower

The Design Legacy of Covid? It’s All Around You.

The Fish That Comes With a Year of Good Luck

Judge John Hodgman on the Secret Flip Off