When the Italian writer and horticulturalist Umberto Pasti and his partner, the French fashion designer Stephan Janson, first visited the Moroccan city of Tangier some 40 years ago, it felt like a homecoming. On vacation from Milan, they left the hedonistic social scene of mid-80s Marrakesh behind in search of quietude and drove more than 340 miles north in a rented Renault 4. Eventually, after a wrong turn, they came upon a field, a few miles south of Tangier’s Moorish medinas, teeming with wild irises. Pasti has been fascinated by these flowers since childhood, and seeing acres and acres of their purple petals stirred him. “We’re home,” said Janson at the time. Even on a dank December night, they were enchanted by this rustic hinterland and, a few weeks later, began renting a space a short drive away in the former home of the English curator and art collector Jim Ede in an expat enclave known locally as the Mountain. 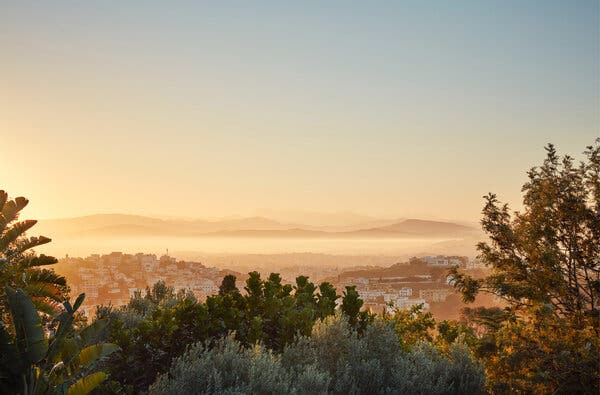 A view of Tangier from the property’s garden.Credit…Ngoc Minh Ngo

Over the next several years, they returned frequently to Tangier, staying in places across the city, until, in 1991, they discovered a house for sale just next door to their original rental. Tebarek Allah — named after the Arabic for “praise the Lord” — is a relatively humble pair of single-story houses with whitewashed stone-and-cement facades that Pasti and Janson call “pavilions” for their folly-like feel. Built between the 1940s and the late ’60s, the property had a faded grandeur, which — along with the more than half-acre of gardens, complete with pear and quince trees — immediately captivated the pair. Though the fields and forests that surrounded the grounds at the time have since been consumed by suburban sprawl, part of the rapid wave of development that has enveloped the port city since the beginning of King Mohammed VI’s reign in 1999, Tebarek Allah remains intact. “We close the door, and we’re in heaven,” says Janson.

At first, the couple used the existing pair of pavilions, which were in varying degrees of disrepair, to house Pasti’s monumental collection of northern Moroccan art. They restored the upper building, a 1,610-square-footMoorish structure with crenelations and a minaret-like tower, tearing down the giant television antenna from its roof and repainting its white walls in a resplendent palette of ocher, aubergine and turquoise. They reimagined the lower building, a 1,290-square-footcottage built in the 1960s that they now refer to as the middle pavilion, as a bohemian retreat. During the work, the history of the place slowly began to reveal itself, and the pair’s ambitions grew. Pasti and Janson discovered, through documents they found on the property, that the upper house, now affectionately known as Diego’s pavilion, was designed and built in the 1940s by the Spanish artist Diego Mullor Heredia, and his tumultuous life story, which includes a career as a celebrated cartoonist and a dramatic fall from grace, has inspired Pasti’s forthcoming novel, “Arabesque.”

In the entrance hall of the upper pavilion, an 18th-century marble sculpture from Veneto, Italy, sits alongside a pair of chairs from Lombardy and a painted drawer from Fez.Credit…Ngoc Minh Ngo
On a Moroccan tiered shelf known as a marfa, an arrangement of objects including a Spanish mirror, a floral Meissen vase and a 19th-century Wedgwood dish.Credit…Ngoc Minh Ngo

Almost a decade after taking over Tebarek Allah, the couple began collaborating with Laura Sartori Rimini and Roberto Peregalli of the Milanese design firm Studio Peregalli, known for realizing intimate residential spaces that are steeped in the past. They reimagined the middle pavilion once again over the course of a few years, tearing down walls to allow a sense of space and light to prevail. The structure now houses a kitchen, a snug sitting room paneled in old scaffolder’s wood and hung with tiles and kilim textiles, an airy bathroom and a guest bedroom with an Andalusian-style iron four-poster bed.

Peregalli also persuaded Pasti and Janson, who had acquired a half-acre plot of neighboring land in 1999, to add a third, lower pavilion. Here, a series of horseshoe-shaped archways cut into the facade give way to a rectangular loggia, with a checkerboard-tile floor, that looks out over the garden. The loggia, in turn, leads to a museum-like, plant-filled central salon whose walls are bedecked with textile fragments and embroideries. The building also contains a bedroom with verdigris-painted walls that doubles as a study, a simple kitchen and a guest suite. The project was not without its complications: The ground needed to be drained and leveled to make way for the structure, as well as a new circular stone fountain, stepped path and Peregalli-designed deep green swimming pool. But the building gave Pasti space to display more of his treasured possessions, including 18th-century Italian furniture and paintings inherited from his father, and the couple now plan to open it to the public as a house museum.

Pasti has been an obsessive collector since his childhood in Milan. From the age of 3, he would gather pebbles, shells and old tin toys to assemble into what he calls “little families.” During a stint in London as a teenager, he struck up a lifelong friendship with the influential British antiques dealer Christopher Gibbs, whose eclectic and esoteric tastes for everything from 18th-century Irish furniture to verdure tapestries helped to expand his own. And since Pasti and Janson first met at Pasti’s apartment in Milan in the 1980s, they, too, have been engaged in an endless conversation about the art, objects and furniture that find their ways into their lives. If Pasti is the sharp-eyed gatherer, Janson is the steely editor. “Every day I come home with something in my pocket,” says Pasti. “Stephan forces me to throw things away.”

At Tebarek Allah, Pasti decorates not with wallpapers, fabric swatches or any preconceived schemes but with objects, placing each piece intuitively. Accordingly, every inch of the home is intricately layered, adorned with objects including lanterns and carpets from Tangier’s bazaars and art from the area’s remote villages and towns. Huge framed panels of Western Islamic, Spanish and medieval sgraffito Moroccan tiles cover several walls.And antique textiles can be found throughout the property, often draped over wood furniture made and hand painted with stylized depictions of the natural world by the region’s Jbala Berber tribes.Pasti has a scholarly fascination with this often-overlooked artisanal tradition, which he sees as one of the country’s primary modes of artistic expression.His extensive collection of wooden treasures encompasses trunks for bridal trousseaus, small tables, jewel boxes and mirrors — all adorned with delicate renderings of local flora, including the lilac-hued Tangiers iris that first enchanted him all those years ago.

The singularity of Pasti’s vision, which spills over into Tebarek Allah’s garden, as well as those he designs for clients, has earned him the name “the flower Christian” among his neighbors. But, as he writes in the new book “The House of a Lifetime” (Rizzoli) — an encyclopedic account of Tebarek Allah’s many lives and the collections housed within it, with images by the photographer Ngoc Minh Ngo — he could just as readily be called el nasrani di el zuwak or “the painted wood Christian,” so ardent is his devotion to preservingthe work of the Jbala tribes. Yet all his pieces,whether a painted Berber shelf or a fragment of a Roman fresco, are precious in their own way and each has its own tale to add to Tebarek Allah’s, itself a fascinating footnote in the long and complex history of Tangier. “I probably own about 150,000 objects,” Pasti says. “Just imagine how packed my head is with stories.”

Tags
From House Janson That With

What Is Miss America, if Not a Beauty Pageant?

How to Be Less Fearful of the Dark 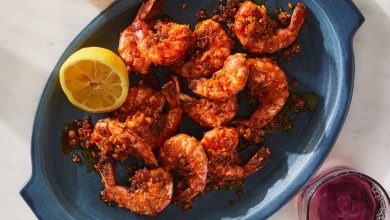