This is the poem that turned me into a poet. Knight, writing about a 16-year-old boy in prison named Gerald. I was 17 when I read it. Had been in prison for nearly two years, and my voice cracked as I spoke. I was in the hole, and reading this poem made me know that poets could come from prison and that I was damn lucky to have whatever it is that made people, even in those crazy-ass prisons, love me enough to keep me safe. 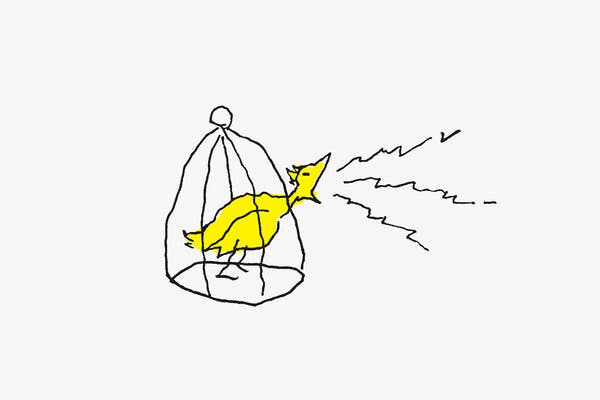 Now you take ol Rufus. He beat drums,
was free and funky under the arms,
fucked white girls, jumped off a bridge
(and thought nothing of the sacrilege),
he copped out — and he was over twenty-one.

Take Gerald. Sixteen years hadn’t even done
a good job on his voice. He didn’t even know
how to talk tough, or how to hide the glow
of life before he was thrown in as “pigmeat”
for the buzzards to eat.

Gerald, who had no memory or hope of copper hot lips —
of firm upthrusting thighs
to reinforce his flow,
let tall walls and buzzards change the course
of his river from south to north.

(No safety in numbers, like back on the block:
two’s aplenty. three? definitely not.
four? “you’re all muslims.”
five? “you were planning a race riot.”
plus, Gerald could never quite win
with his precise speech and innocent grin
the trust and fists of the young black cats.)

Gerald, sun-kissed ten thousand times on the nose
and cheeks, didn’t stand a chance,
didn’t even know that the loss of his balls
had been plotted years in advance
by wiser and bigger buzzards than those
who now hover above his track
and at night light upon his back.

Reginald Dwayne Betts is a poet and lawyer. He created Freedom Reads, an initiative to curate microlibraries and install them in prisons across the country. His latest collection of poetry, “Felon,” explores the post-incarceration experience. His 2018 article in The New York Times Magazine about his journey from teenage carjacker to working lawyer won a National Magazine Award. He is a 2021 MacArthur fellow. Etheridge Knight was an American poet who was a cornerstone of the Black Arts Movement. His collections include “The Essential Etheridge Knight” (University of Pittsburgh Press, 1986), from which this poem is taken. He died in 1991.

A Soup That Tastes Like Being Home for the Holidays