IN 1913, A shipment of plants from the Yokohama Nursery Co. in Japan arrived in the port of San Francisco, among them a seven-foot-tall trident maple destined for the Japanese Pavilion at the Panama-Pacific International Exposition to be held two years later. More than a century old, the tree was an exemplar of the Imperial style, a type of bonsai developed for shoguns and feudal lords and named after the Imperial court during the 19th-century Meiji Restoration, an era of cultural transformation that arose following the country’s 214-year-long period of isolation. Evenly spaced branches reached out from a trunk twisted into gentle contrapposto, its clusters of spring green foliage suggesting the outline of an isosceles triangle. Like most bonsai from that time, the maple expressed an ageless ideal of the natural world wrested into equilibrium.

When the exposition ended, the maple was purchased by Kanetaro Domoto, a Japanese immigrant who arrived in Oakland, Calif., in the 1880s and co-founded with his brothers what would soon become the largest Japanese-owned plant nursery in the country. When the Domotos lost their property — which once spanned 48 acres — during the Depression, Kanetaro’s eldest son, Toichi, brought the trident maple to his own nursery in nearby Hayward, but by 1942 the family was imprisoned at Colorado’s Amache internment camp.

In the camps, bonsai artists — those forced, like the Domotos, to give up their collections — made trees and flowers from paper and wire, makeshift manifestations of their own heartbreak. After the war, when the camps were closed, those practitioners started local clubs as private spaces for Japanese American hobbyists, eventually welcoming a broader public fascinated by Japanese aesthetics. Toichi Domoto returned to his nursery, which had been left in the care of an employee, and began the long process of restoring his family’s prized maple. In his absence, the tree had grown scraggly, its wooden container rotted and its roots broken through into the soil below.

In the decades that followed, the Domoto Maple, which now stands nearly nine feet tall and is a centerpiece of the permanent collection at the Pacific Bonsai Museum outside Tacoma, Wash., became a living symbol of struggle and survival — and an inadvertent precursor to a new movement of contemporary bonsai. By training native species into sculptural forms that express their unique ecological and cultural climates, bonsai artists from East Asia to South America are proposing a new, expressionist style that both questions and embraces the constraints of this centuries-old botanical tradition, exploring the immensity not just of nature but of human experience itself. 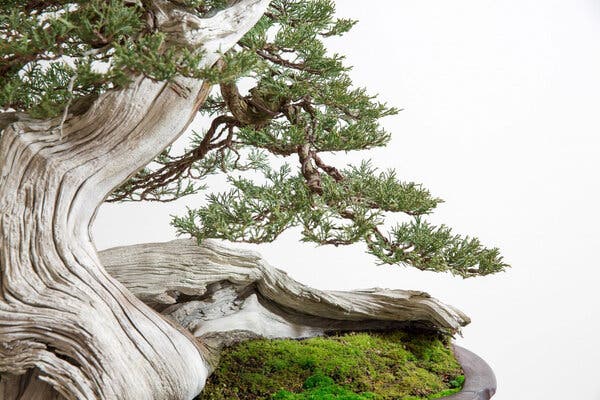 THE PRACTICE OF miniaturizing plants is thought to have come to Japan from China sometime around the seventh century, when the two countries formally established diplomatic ties. By that point, Chinese gardeners had likely been creating potted landscapes, or penjing (“potted scenery”), for hundreds of years, bringing nature into the homes of political elites, painters and calligraphers. Penjing, as it developed over the centuries, didn’t idealize nature but rather portrayed — or, as some bonsai scholars suggest, exaggerated — its strange, expansive beauty. Until the 1970s, when the Chinese government began codifying five regional schools of penjing, each with its own approach to styling local species through cutting, wiring or pinching, there were few rules: Early guides published in the 16th and 17th centuries suggested that practitioners should attempt to imitate values like vigor and austerity represented in classical landscape painting, says Phillip E. Bloom, the 38-year-old curator of the Chinese Garden at the Huntington Library, Art Museum and Botanical Gardens in San Marino, Calif. Often, the principles were abstract — an artisan might have aimed, Bloom says, “to somehow create heaven in the tree” — which left penjing open to poetic interpretation.

As early as the 12th century, Japanese craftspeople and monks had likewise evolved the art into a controlled, observational form that later came to be known as bonsai (“potted planting”); while the term itself had existed for centuries, it was not until the Meiji era (1868-1912) that it took on its modern meaning. By then, scholars had begun to classify elements like trunk shapes, branch placement and preferred species — any locally grown, woody-stemmed perennial with true branches and relatively small leaves, including pine, maple, juniper, beech, elm, cherry and plum. Bonsai could range in size from just a few inches tall to Imperial trees that could exceed six feet. Regardless of size or species or age, each tree distilled the sublime beauty of an ancient forest. Today, the Kyoto-based bonsai curator and scholar Hitomi Kawasaki, 41, compares the ideal form of classical bonsai to the kamae posture of Noh theater, with the actor’s knees slightly bent and arms held away from the body. “If you’re in that stance, it’s the most stable point, and if you can let go, it’s almost like floating,” Kawasaki says. “With bonsai, it’s similar: There’s a point of balance, you strengthen that point and everything comes into being.” When practitioners succeed in this, their trees can outlive them by centuries, their growth slowed, but never fully halted, by confinement; if the specimens are off balance, they eventually wither. Poised between control and abandon, creation and destruction, life and death, the art is, as Kawasaki writes in a forthcoming essay, “an attempt to find a middle way out of dualism.”

Though European missionaries encountered penjing and bonsai as early as the 16th century, these crafts were then practiced exclusively in East Asia by masters who largely tended the collections of aristocratic patrons or government officials. But during the Meiji period, bonsai specimens were displayed at world’s fairs in cities like Paris, Vienna and Chicago, helping spark a craze for the aesthetic movement known as Japonisme, which influenced the French Impressionists and countless European fine jewelry and furniture companies. By the mid-20th century, though, both bonsai and penjing temporarily stalled in their home countries; in Japan, most nurseries were asked to grow food during World War II, and in China, the discipline was purged in the Cultural Revolution as a relic of the feudal past.

Despite that, the art form flourished in the West thanks to teachers like Yuji Yoshimura, who taught bonsai to foreign diplomats and American G.I.s stationed in Japan after the war, and the charismatic, Colorado-born John Naka, who introduced the practice into households across the United States. Working in Southern California from 1946 until his death in 2004, Naka made extensive use of native trees such as California junipers and coast live oaks, a departure from traditionally favored Japanese species like black pine, cedar and maple. He published a pair of seminal technical guides and mentored students around the world, inspiring new clubs to form in Australia and South Africa and across South America. Though Naka’s trees were formal — in his most famous work, a miniature forest of 11 Foemina junipers held at the National Bonsai & Penjing Museum in Washington, D.C., tufts of foliage levitate around a cluster of pin-straight trunks — his cosmopolitan view of bonsai set him apart from some of his peers who, in the 1950s, argued that bonsai should be taught exclusively in Japanese. “There are no borders in bonsai,” Naka once said. “The dove of peace flies to palace as to humble house, to young as to old, to rich and poor.”

Then, in the 1980s, the Japanese practitioner Masahiko Kimura, now 81, rose to global prominence with large Shimpaku junipers contorted into clouds of foliage swirling around ghostly deadwood bases. If Naka described bonsai in the utopian language of 1960s California, then Kimura, who often gave workshops in Europe, espoused a vision for bonsai that was as vivid, muscular and ego-driven as Modernist painting, recasting the master not as a craftsperson but as an auteur.

TODAY, NAKA’S AND Kimura’s students continue to redefine the field: Take, for instance, Ryan Neil, who founded his studio, Bonsai Mirai, outside Portland, Ore., in 2010 after a six-year apprenticeship at Kimura’s garden in the Saitama prefecture, home to Japan’s most venerated bonsai nurseries. Neil, 39, combines his teacher’s formal daring with Naka’s open, idealistic approach, sculpting Rocky Mountain junipers into pale white streamers or rugged bursts of deadwood reaching out from plumes of foliage. These trees, he says, “allow people to see their place in the native environment.”

On Croatia’s Dalmatian coast, Marija Hajdic, 45, celebrates seasonal transformation with wild plum trees that blister with pale pink blossoms in the spring, and deciduous hornbeams that drop their leaves each winter to reveal branches that seem to claw at the air. Like Neil, Hajdic works principally with foraged trees — known as yamadori in Japan — often gathering ones that are dynamic and wild rather than calming or geometric. “When I go to nature, I want my heart to start pounding,” she says.

In Japan, where classical bonsai still predominates and young people view the craft primarily as a hobby for the elderly and the rich, the 40-year-old artist Masashi Hirao, based in Saitama, has turned public demonstrations in which he plants, prunes and wires his trees for live audiences — a common source of income for bonsai professionals — into performance art, complete with live music, a practice that traditionalists have denounced as antithetical to bonsai’s meditative intent. In his displays for retail spaces and fashion shows, Hirao has suspended wispy junipers in tiered ceramics and trained variegated landscapes over precarious stacks of stone. “The trees themselves are not about self-expression. I’m a servant to the tree,” he says. “The way I put the trees together is how I express myself.”

Then there are Filipino artists, like Bernabe Millares, who work with the mangroves that fringe their archipelagic homeland, while their counterparts in Brazil, like Mário A G Leal, work with fruiting pitanga trees from their country’s tropical coast and gnarled calliandras from the northeastern bush. In China, WeChat groups dedicated to penjing have proliferated, introducing species and styles from regions that previously had no formal tradition, while a new generation of oligarchs has spent small fortunes collecting penjing, sometimes investing hundreds of thousands of dollars in a single plant. The venerable Seikouen nursery in Saitama teaches hobbyists to make playful, accessible bonsai using inexpensive materials — similar to the “pop bonsai” described by the author Lisa Tajima in her 2004 book of the same name — while the increased exportation of classic species, says Kawasaki, the Kyoto-based scholar, has led young artists to experiment with nontraditional plants like gajumaru, a banyan from the island of Okinawa, in the south, that is rarely used by older masters.

For enthusiasts who have taken to bonsai during the Covid-19 pandemic — Bonsai Mirai saw a 27 percent increase in registrations for online classes from March through May of 2020 alone — the art form has become a ready metaphor for days spent in confinement and has offered solace from the monotony of modern life, much as it did for its early practitioners. In a world shadowed by death, it proved that life would carry on, even under difficult circumstances. “When I look at a tree, my troubles are gone,” Kawasaki says. “Humans worry. The tree keeps growing.”

A Bulgari Necklace With a Jazz Age Flair

A Brief Introduction to Philosophy (Through a Certain Sex Act)

A Portrait Inspired by the Bright Colors of Los Angeles