Welcome to the T List, a newsletter from the editors of T Magazine. Each week, we share things we’re eating, wearing, listening to or coveting now. Sign up here to find us in your inbox every Wednesday. And you can always reach us at tlist@nytimes.com.

Home Away From Home 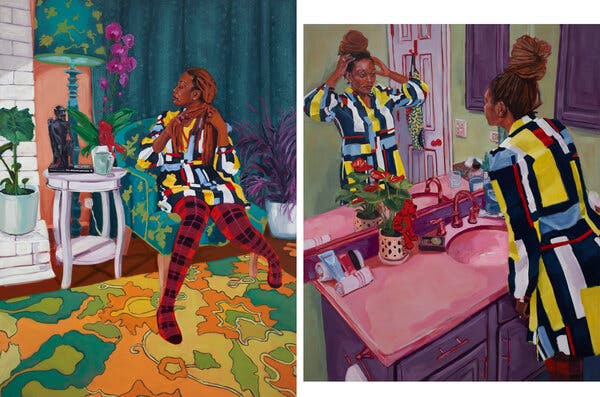 The Kenyan-born painter Wangari Mathenge, whose vivid figurative works offer intimate portraits of the diasporic experience, is having her first U.K. solo exhibition at London’s Pippy Houldsworth Gallery. The show brings together two series bridging past and present: “The Expats,” based on photographs from Mathenge’s childhood after her father relocated the family to London in the ’70s, and “The Ascendants,” depicting domestic scenes from the artist’s present-day life in Chicago. Remaking the family photos in “The Expats,” Mathenge says, helped her “connect with my parents more and better understand colonial Kenya.” She was also interested in the racial and class implications of the terms “expat” and “immigrant.” In “The Ascendants,” she explores the idea of home in the absence of one’s homeland. The delicately balanced compositions feature contemplative figures alongside personal items containing layers of associations — a statuette of a Masai elder, say, or a teddy bear wearing a scarf. For Mathenge, the moments she renders are microcosms: “It’s within a moment in time that you understand a culture, because that culture is just made for that person in that setting.” “You Are Here” will be on view from Oct. 12 through Nov. 13, houldsworth.co.uk.

A Clothing Line for Lounge Lizards

In 2018, New School grads Dylan Cao, Jin Kay and Huy Luong founded Commission, a women’s wear label specializing in business-casual staples with contemporary flourishes like graphic prints and lace and fringe trim. Now, after requests from customers and retailers alike, they’re launching a men’s line, the governing principle of which is that, as Cao puts it, “we would never offer a piece we wouldn’t wear ourselves.” The designers were inspired by the loucher side of the ’70s, and the resulting collection is rife with darkly sensual undertones. Though the relaxed suiting and striped knit polos feel lifted from 1975, luxe updates emerge upon closer inspection: What appear to be high-pile mohair pullovers are in fact pure cashmere; jacket lapels are notched low; and coat collars come extended on one side with a flap that buttons. From $430, ssense.com.

From left: Kali’s “Debbie with Kitty Green #1” (1969) and “Young Boy” (1968).Credit…Courtesy of Staley-Wise Gallery and the Joan Archibald “Kali” photograph and papers collection from the Rose Library at Emory University

In the summer of 1962, having recently divorced at the age of 30, Joan Archibald left her two young children with her mother in Long Island and set out for the shores of Malibu, California. (“My mom needed to expand herself,” Archibald’s daughter Susan explained many years later.) There she shed her former life as a housewife, rebaptizing herself “Kali,” brushing shoulders with celebrities and photographing the scene around her. After moving into a house in Palm Springs with a pool, she began using it as a giant finishing bath for her photos, pouring various dyes and paints into it until she’d achieved the desired effects. Flooded with swirling, multilayered psychedelic hues, Kali’s portraits, often of wide-eyed young women, can feel like the ultimate distillation of an expansive, naïve and chaotic place and time. Despite her innovative techniques, her work has remained almost entirely unknown, but can now be seen in a new volume, “Kali,” by Powerhouse Books. $175, powerhousebooks.com.

A scented candle has the power to transform a space and, by extension, a mood — something that becomes more important as the days get shorter. Founded by Azza Gallab in 2015, Haremesque is an online candle boutique that pays homage to the rich aromatic culture of Gallab’s ancestral homeland, Sudan, a historic center of the fragrance trade. Based on oils and perfumes procured over the course of her extensive travels, the fueling “potions” are hand-poured in Gallab’s Brooklyn home studio and ensconced in elegant ceramic vessels. They come in six individually crafted scents, such as the aptly named Azza — a local colloquialism for “Sudan,” in tribute to the woman who led the fight against British colonial rule — which is infused with mahogany, sandalwood and cedar, and drizzled with Madagascar bourbon vanilla atop oakmoss and Nubian musk. From $125, haremesque.com.

Looks from the Row’s new collection of children’s wear.Credit…Clara Balzary

The understated luxury label the Row launched in 2006 with high-quality basics, and since then, its meticulous designs and anti-trend approach have gained the brand a devoted following. This week, it launches a children’s line for kids ages 2-10. The five-piece capsule collection includes a front-tie cardigan, joggers and velvet Friulanes with soles made from sturdy recycled tires for durability. Designed to mix and match, the knits are made with Italian-sourced cashmere and available in four colors, including cobalt blue and amber orange. The gender-fluid pieces are minimally designed and free of unnecessary hardware. From $390, therow.com.

An Artist Finds Beauty Between the Cracks

Tags
Can Home She Wear

The Ever-Evolving Art of Bonsai

Judge John Hodgman on the Secret Flip Off

We Went to Vegas to Wring Joy From Heartbreak