On Nov. 19, 2019, Anthony Fauci, the director of the National Institute of Allergy and Infectious Diseases, happened to be describing to me recent research that was on his mind. “A real hot topic” at that moment, he said, was the development of a universal influenza vaccine. He meant a vaccine suitable for all ages that would be at least 75 percent effective for a year or more against Influenza A viruses — the type that causes pandemics but that also, along with Influenza B, annually infects as many as a billion people worldwide and kills somewhere between 290,000 to 650,000 of them. A push to develop such a vaccine began in earnest about a decade earlier and was gaining momentum. “That’s something that I’m spending a lot of time on,” he said. “Also, a lot of scientists are struggling in a positive way to make advances.” It was, he went on, “somewhat embarrassing” that a new and updated flu vaccine had to be made every year. “We really need to do much, much better to get a better vaccine. One that covers all of the possible iterations of influenza.”

Last month, two years and a coronavirus pandemic later, I asked him if in late 2019 he would have guessed that an influenza virus would be the cause of the next pandemic. “Yes, of course,” he said. “They would say, ‘What’s your worst nightmare?’ and I would say, ‘It would be the emergence of a brand-new virus likely jumping from an animal species to a human that’s respiratory-borne, and that most likely would be influenza.’” And “the next one might be,” he added.

Novel influenza viruses that leap from birds or pigs to people have caused four pandemics in a little over a century; the one in 1918 is believed to have killed 50 million people. When enough of the global population gained some immunity to those viruses through exposure or vaccination, they faded away or became seasonal. (Many believe SARS-CoV-2 will eventually become endemic as well, circulating at low levels like the coronaviruses that cause the common cold.)

Part of the reason the influenza virus has proved impossible to eradicate has to do with its structure. The surface of all influenza strains is studded with proteins, the most important of which, for Influenza A and B, are hemagglutinin (HA) and neuraminidase (NA). (The nomenclature of viral strains like H1N1 describes their varying combinations.) The HA proteins have a thin stalk and a rounded head, like a lollipop. The head is the part of the protein that binds to our cells, whereas the stalk contains the machinery to fuse the viral and cell membranes, making possible the transfer of genetic material. The HA head tends to be the structure our immune system — on its own or prompted by a vaccine — recognizes as an invader and for which it produces neutralizing antibodies.

But while viruses like measles are relatively stable, the genes of flu viruses frequently mutate, which constantly changes the shape of the HA head. So vaccines have to change regularly, too. (More rarely, an animal influenza virus that contains a new HA or HA-NA combination gains the ability to infect people, spurring a pandemic.) The production and distribution process for a new vaccine takes about six months, however, during which time the circulating strains may shape-shift again. If the vaccines end up matching a given season’s viruses closely, they are up to 60 percent effective at preventing illness, the C.D.C. estimates; when they don’t, their effectiveness has been as low as 10 percent. But for roughly half a century — annual flu vaccinations started in 1960 — a better solution seemed largely out of reach.

Then, around 2008, multiple research groups found something surprising in human blood samples: antibodies that could defend against two HA subtypes. “They were H1 antibodies that recognized H5 bird flu, and everyone said, ‘Wait, that’s not supposed to happen,’” James Crowe, the director of the Vanderbilt Vaccine Center, recalls. It turned out that those antibodies were bound to the stalk of the HA proteins, as opposed to the head — and the stalk appears to mutate less than the head between HA-NA strains. “That started the whole revolution of the universal flu vaccine,” Crowe says. “We thought the surface of the flu virus was infinitely variable. But actually, there are some places that rarely change drastically.” Multiple groups now have universal vaccines in various stages of clinical trials. Some of them, including one that the National Institutes of Health is testing for safety in people this flu season, produce more stalk antibodies than traditional vaccines.

Even if a vaccine is broadly effective against different flu strains, it’s unclear how long that protection might last. (A shot that lasts just two or three years would have a big public-health benefit.) There is evidence that, in fact, the immune system can generate a lifelong defense against influenza — but there’s a catch. People appear to be “imprinted” somehow with the HA proteins they encounter in childhood, says Aubree Gordon, an associate professor of epidemiology at the University of Michigan School of Public Health. People respond to flu viruses and vaccines differently based on their past exposure. “It’s not only what you’ve recently been exposed to which is important,” she says. “But we think your very first exposures are incredibly important for determining your response for the rest of your life.”

People imprinted with one HA subtype have a response ready for similar viruses. But when they are infected with one that’s less alike, they may still make antibodies partly geared toward the earlier virus, rendering them less beneficial. A 2016 paper in Science found that your birth year, more than your age, determines your risk of severe disease from a given influenza permutation. As an example, the 1918 pandemic was disproportionately lethal for young people, possibly because the HA proteins for the virus were different from those of the flu viruses circulating during their childhoods; the same cohort fared much better during the 1968 pandemic, caused by a virus that may have matched their early exposure. It’s still a mystery how this imprinting works, but figuring that out will very likely be key to getting a universal flu vaccine that works well for most people, according to Fauci. “There are still a lot of unknowns,” he says.

The success of the Covid-19 vaccines has given many of us the false sense that vaccines are relatively easy to come by for any infectious disease. “I think we’re all spoiled now with SARS-CoV-2,” says Florian Krammer, a virologist at the Icahn School of Medicine at Mount Sinai. “The normal speed of vaccine development takes years.” What’s more, already having working vaccines can impede progress toward better ones. Faced with a novel virus spreading rapidly through a population during a pandemic, researchers can give one group a placebo and another a vaccine and see the different outcomes relatively quickly. But many would consider it unethical to ask people not to get a proven flu vaccine so they can serve as a control group in a trial. To see if a new flu vaccine effectively covers multiple flu iterations, researchers will need to inoculate many people with it or an existing shot for multiple influenza seasons and then wait for a year in which the seasonal vaccine performs poorly and the experimental one does well.

Clinical trials are expensive too. The coronavirus has shown how the urgency of a pandemic can accelerate them by marshaling all available resources; but it has also pulled virologists’ time and resources away from influenza. “If you had Operation Warp Speed for universal flu vaccines,” Krammer says, “you might already have one.” As it is, Fauci hopes one of the candidates now in trials could be ready in five years — “if we’re lucky,” he told me recently. “If we’re not lucky, 10.”

The emergence of the omicron coronavirus variant “is a clarion call for finding a pan-coronavirus vaccine” as well, says Michael Osterholm, the director of the Center for Infectious Disease Research and Policy at the University of Minnesota. Indeed, work on one is already underway. But the potential threat omicron poses should also, he adds, be “a wake-up call to the world about why these vaccines are so important.” After all, he notes, more flu pandemics are coming, too: “And so we don’t want to wake up one morning and say, ‘Oh, I wish we had done a lot more on the flu vaccine.’”

Kim Tingley is a contributing writer for the magazine. 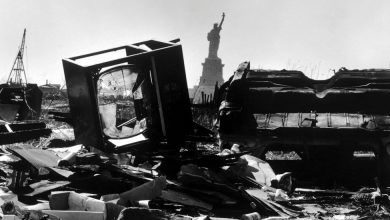 Tony Kushner, Oracle of the Upper West Side

A Fashion Stylist Who Found Inspiration in New Surroundings

The First and Only Grocery Store in Fire Island Pines