What You Get for $4.5 Million in California 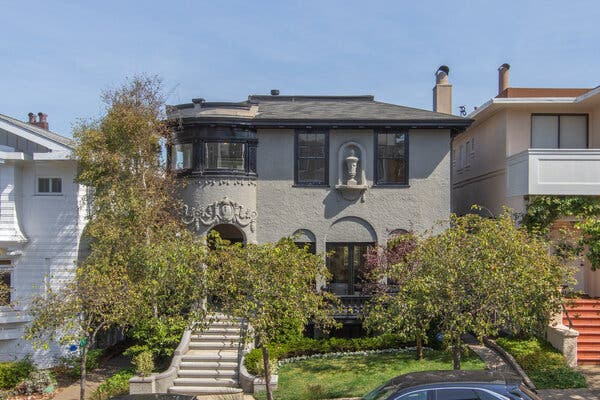 A Beaux-Arts house built in 1912, with four bedrooms and three bathrooms, on a 0.1-acre lot

This house is in West Clay Park, a neighborhood that was developed in the 1910s and is known for its stately homes and quiet, tree-lined streets. It has been owned by the same family for 60 years and has been well maintained inside and out. The original molding and wainscoting in many rooms has been preserved, and the grand facade still has its original stucco garlands and a niche with an original statue.

Two parks are within walking distance: The Presidio, with its hiking trails, 19th-century fortress and dramatic views of the Golden Gate Bridge, is less than half a mile away; Lincoln Park, which has an 18-hole golf course, is less than a mile away.

A short hallway connects the living room to the kitchen, which is large enough to hold a table. Off the hallway is a den that could be used as a home office, and off the kitchen is a full bathroom with windows overlooking the deck.

From the foyer, a staircase leads to the second floor. At the near end of the upstairs hallway is the primary suite, which has a rounded sitting room off the bedroom and a full bathroom with marble tile. At the other end of the hallway are two guest rooms, each large enough to hold a queen-size bed. One has a bay of windows with a built-in bench; the other has access to a sunroom lined with windows. A third guest room is off the middle of the hallway, as is a bathroom with a combination tub and shower.

On the lowest level of the house is an open space used as family room, with white-painted paneled walls and a fireplace. This level also has a half bathroom that doubles as a laundry room, as well as a wine closet with built-in storage.

Outdoor space: The deck off the dining room is elevated, with a partial view of the Golden Gate Bridge. The attached garage, accessible from the rear alley, holds one car. 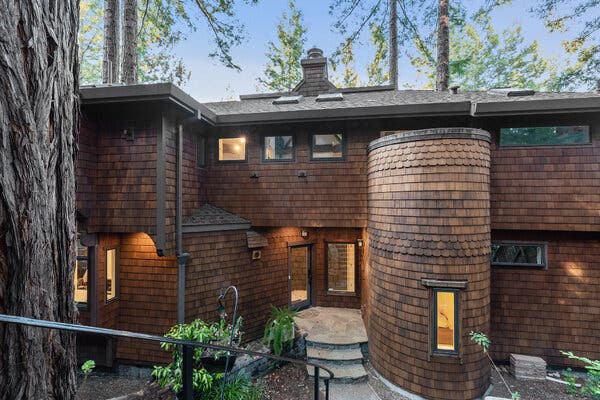 A 1988 house with four bedrooms, four and a half bathrooms and a one-bedroom, one-bathroom guesthouse, on a 0.5-acre lot

This home was designed by a local architect as his primary residence, with a focus on blending indoor and outdoor spaces to maximize views of Mill Valley’s redwoods. A 2010 remodel updated the kitchen and HVAC systems.

The property is in a part of Marin County known for its hiking trails around Mount Tamalpais, many of them less than a mile away. Downtown Mill Valley is also nearby: The public library is a mile away, and restaurants and coffee shops are within about a mile and a half. Santa Rosa and San Francisco are less than an hour away.

Indoors: From the street, a driveway leads past the garage, stopping near the entrance to the house.

Beyond the front door is a foyer that steps down to a sunken living room. The standout feature of this space is a fireplace with a rock surround stretching nearly 20 feet up to the ceiling.

To the left of the living room is a kitchen with two ovens, two dishwashers and a range built into an oversized center island. The kitchen faces a dining room open to the sunken living room below; both the dining room and the kitchen have access to a deck. Also on this level is a guest room with a private balcony and an en suite bathroom.

The floor below the main level contains an additional guest room and full bathroom, and is connected by an open hallway to an office with another balcony. A wine-storage room and laundry room are also on this floor.

The family room on the lowest level has another fireplace, an adjoining powder room and access to a covered deck.

The two-story guesthouse, connected to the main house by a footpath, has a bedroom, a full bathroom and a balcony.

Outdoor space: The main deck off the family room extends out over the hillside, among the surrounding trees. A wood bench is built into one side of the deck, and there is room for lounge furniture on the other side. The covered deck off the family room is a similar size, and each of the private balconies is big enough to hold at least two chairs. The roof deck, which looks toward Mount Tamalpais, has a wood railing and tile floors. The detached garage has two parking spots and a bonus space that could be an art studio or home gym.

A two-bedroom, three-bathroom penthouse loft in a 1930 Art Deco building

The Eastern Columbia Building has been a beloved part of the downtown Los Angeles skyline for nearly a century, known for its distinctive turquoise terra-cotta tile and four-story clock tower adorned with neon lights. It was originally the headquarters of a department store, but was converted into condominiums starting in 2004, a project that won numerous historic preservation awards.

The neighborhood offers a mix of retail and nightlife. The Orpheum Theatre, a popular concert venue, is across the street, as is a historic movie theater that now holds an Apple store. Less than a mile away is the Staples Center, the home arena of two N.B.A. teams, a W.N.B.A. team and an N.H.L. team.

Indoors: This penthouse is the largest unit in the building, and one of the largest lofts in downtown Los Angeles.

To the left is an open kitchen with stainless steel cabinets and appliances, including a Viking range and refrigerator. Most of the rest of the space is a living area, with a balcony accessible through a glass door at the far end. Between the kitchen and living area is a bathroom with a black-tiled walk-in shower.

At the center of the room is a metal-and-wood staircase that leads to the second floor, which could be used as a bedroom, a second living room or a work space. An alcove holds a walk-in closet and a bathroom with a marble tub and a chrome vanity.

The staircase continues to the third level, where an interior balcony offers a glimpse of the floors below and glass doors open to an outdoor terrace. Built into a corner of this floor is a bar with a marble counter and a wine refrigerator.

At the top of the staircase is the fourth floor, configured as one large primary suite. A wide window offers city views, and a skylight above the bed brings in more light. The en suite bathroom is similar to the bathroom on the floor below, with a marble tub and a floor tiled in black, white and gray.

The seller has commissioned a plan for a private elevator; it has been approved by the building and could be installed by the new owner.

Outdoor space: This unit has two terraces, both of which have sweeping city views: The first, off the lowest level, is large enough for a set of chairs and a cafe table; the second, off the third floor, is slightly larger and connects to the building’s rooftop pool. Other amenities in the complex include a gym, garden and outdoor fireplace. This unit comes with a storage area and two parking spots in a gated structure.

Taxes: $56,256 (estimated, but the home is eligible for reduced property taxes under the Mills Act, providing economic incentives for homeowners to preserve historic properties), plus a $1,478 monthly homeowner association fee

Dobbs Ferry, N.Y.: A Mixed-Income River Town (but a View Will Cost You)

New Supertalls Test the Limits, as the City Consults an Aging Playbook

Can You Break the Lease if Your Apartment Might Flood?