For centuries, the learned and the curious have pondered the great mysteries of the universe: What is dark matter? Who built Stonehenge? When did time begin? How, if there’s an irresistible force, could there be an immovable object?

And, of course, the puzzle of all puzzles: Which came first, the chicken or the egg?

To Jacques Pépin, the chef, painter, public-television host with the most, social media sweetheart, philanthropist, artisan, handyman, Gallic charmer and author of a few dozen cookbooks, including the new “Art of the Chicken:A Master Chef’s Paintings, Stories, and Recipes of the Humble Bird,” there isn’t so much as a pinch of doubt on the subject.

“It is the egg, absolutely,” Mr. Pépin, 86, said with calm authority, if no concrete evidence, sitting with a visitor at the kitchen island of his house in Madison, Conn.

Around him, activity swirled. Tom Hopkins, a photographer who organizes, curates and shoots Mr. Pépin’s artwork, was working in the studio upstairs. A houseguest was chatting with Mr. Pépin’s assistant, Kelsey Whitsett, who occasionally excused herself to answer the phone, annotate or adjust some of her boss’s reminiscences, and offer refreshments. A Jura espresso maker stood at the ready. The refrigerator was opened for inspection: beer, a tin of pressed caviar, a few quarts of milk and, yes, lots of omelet material. 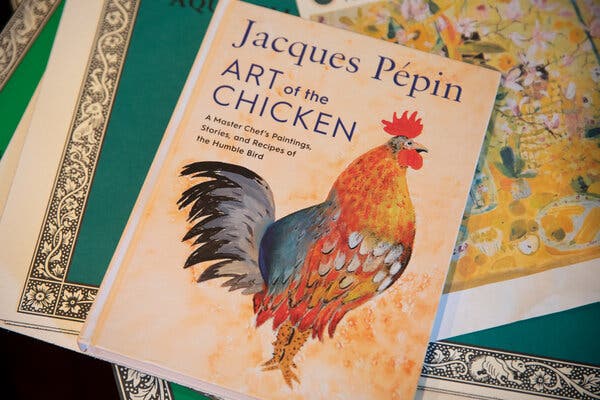 Food for thought: “I always learn when I cook with someone. Often I learn what not to do.”

Mr. Pépin, who comes from a family of restaurateurs, was 13 when he left his home in Neyron, a small town near Lyon, for a culinary apprenticeship 35 miles away, in Bourg-en-Bresse, where he was born. And he clearly learned his trade well: He was barely in his 20s when, as part of his compulsory military service, he became Charles de Gaulle’s personal chef. (Madame de Gaulle called him “petit Jacques.”)

Hungry to see the world, Mr. Pépin came to New York in 1959. His plan, he writes in “Art of the Chicken,” was to learn English, work in the United States for a few years and then return “to the real world of Paris.”

Six decades on, he is still here cooking, teaching, tasting and talking about the power of food to bring people together. “There is no religious or gender or racial application,” he said. “Everyone is equal in the eyes of the stove.”

Before settling near Connecticut’s shoreline, Mr. Pépin lived with his wife, Gloria, and their daughter, Claudine, in the Catskills, where he bought and rehabilitated an abandoned house. “We were on top of a mountain. I used to ski down the driveway,” he said.

But in 1974 he crashed his car while trying to avoid a deer, suffering multiple fractures, a broken back and damage to one of his hands, he said, “so we decided we had to move from there.”

Knowing only that they wanted to be within easy reach of New York City and Boston, the Pépins scouted Madison, where they had some acquaintances, and ended up buying a former brick factory on four acres. The building wasn’t in good condition, but Mr. Pepin “could see a great deal of possibility.”

“We never thought we would stay here forever,” he said, “but it drew us in more and more. I was working in the garden, building stone walls.” He also cleared the land for the boules court and built a stone barbecue.

“When I came here in 1959, I enrolled at Columbia University in an English program for foreign students. I took a class in sculpture and in drawing, and that’s what started me,” Mr. Pépin said of his artwork. Credit…Tony Cenicola/The New York Times

Over the years, there have been renovations, expansions and additions. Early on came a structure known as the back house, with storage space downstairs and an apartment for guests above. A couple of decades ago, Gloria Pépin, weary of the magazine and newspaper photographers and television crews traipsing through the house and commandeering the kitchen, gave her husband an ultimatum: Either they go or I do.

Accordingly, a second kitchen was built on the ground floor of the back house. “The original structure cost us $21,000,” Mr. Pépin said. “When we redid it with the new kitchen, it was $300,000.” Marital harmony: priceless.

Mr. Pépin’s touch is everywhere on the property. He hand-painted tiles in both kitchens, fashioned mosaics for the shower stalls in the bathrooms and, at his wife’s request, did a floral painting on the door of the utility closet in the back house. The table in the screened porch? He built it with a stack of boards from the house’s old deck and a helping hand from one of his brothers, who had come for a visit. The doughty Mr. Pépin also restored or refinished more than one piece of furniture in the large room off the kitchen in the front house.

About that furniture: It is, in gastronomic terms, a smorgasbord — a pair of French bergère chairs, a crosscut golden oak Mission-style table, a Chinese cabinet, a marquetry cabinet on a stand with both Asian and European elements. Mr. Pépin acquired many of the pieces in junk shops, he said, but he has a good eye. They’re not junk. A particular prize is the Biedermeier secretary in the hall near the stairs, which he inherited from his mentor and friend Helen McCully, an influential mid-20th-century food writer and cookbook author.

Tucked into one of the bookcases that Mr. Pépin built — of course he built them — are several large black binders holding decades’ worth of menus from family celebrations, benefits and food-preparation demonstrations held at the house. The bill-of-fare borders are illustrated by Mr. Pépin, who meticulously writes out what’s cooking for each event. A boules party in early August, for example, started with a round of honey-drenched Brie, mini-Reuben sandwiches, charcuterie and crostini, and moved on to baked salmon and a chickpea stew. For dessert, the 50 lucky guests got apricot tart and cookies.

“This is a whole life. From the beginning of my marriage, I was doing them,” Mr. Pépin said of the menus. “It brings back great memories.”

Gloria Pépin died in December of 2020. “I am by myself, so I use small pots now,” Mr. Pépin said quietly, nodding at the gleaming, copper-bottomed cookware hanging on a wall in the kitchen. “I cook every day. But this is what I miss most: sharing a bottle of wine, which we did for half a century, and eating together, which we did for half a century.”

The Penthouse That Keeps Breaking Records in SoHo 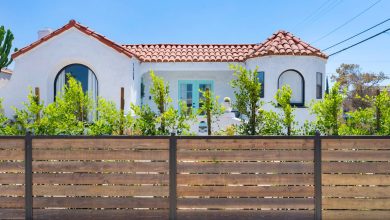