This modern five-bedroom country home sits on about 30 rural acres in Andalusia’s Sierra Nevada National Park, about halfway between the cities of Granada and Almería, near the southeast coast of Spain.

Built in 2005, the 4,550-square-foot house is designed around its central courtyard, with a covered walkway surrounding a fountain, olive trees, wisteria and rose plants, and several seating areas.

An equal draw may be the 365-degree panoramic mountain views from its hilly perch — including north to the snowy peaks of the Sierra Nevada and south to the Sierra de Contraviesa and, on clear days, across the Alboran Sea to Morocco. 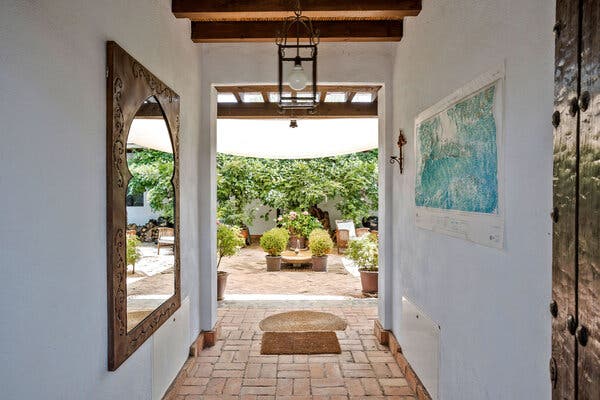 The home’s main entrance leads past bedrooms on either side to the central 1,370-square-foot courtyard. Credit…Courtesy of The Singular Space

The property accentuates sustainability, “in full connection with nature,” said Ana Vela, a co-founder of The Singular Space, the Madrid-based agency that has the listing, with eco-friendly features including a seasonal irrigation canal, solar lighting in the garden and a small outbuilding with solar panels.

Wrought-iron gates open onto a tree-lined drive leading to the house. Seen from above, the home’s single-level layout resembles a square doughnut, with the bedrooms and common spaces arranged around the 1,370-square-foot courtyard. On either side of the main entrance are two bedrooms with en suite baths. Heading toward the back of the house, the main bedroom suite is on the right and the eat-in kitchen is on the left, opposite one another. The bedroom has French doors opening onto a 1,290-square-foot shaded terrace, with a small office space next door. The kitchen has local artisanal tile accents, granite countertops and double stainless-steel sinks.

Between the kitchen and the suite, along the facade farthest from the entrance, are the joint living and dining rooms. Both have doors out to the courtyard on one side and to the terrace on the other.

The design gave “central importance to local and artisanal details,” Ms. Vela said, with walls built from thermal clay blocks and exterior stones from the grounds. The flooring throughout is a mix of oak and handmade terra-cotta or ceramic tiles; clay bricks cover the patio floor in a herringbone pattern. The exterior doors and window frames are made of iroko wood. The roof insulation was updated in 2017.

The grounds are planted with rose bushes, fruit trees, almond and poplar trees, and an olive grove. The house, on the bus route between Granada and Almería, is about two miles from Bérchules, which Ms. Vela described as a “vibrant agricultural village” with a library, a pharmacy, several bars, a hotel and three small supermarkets. Granada, and Federico García Lorca Granada Airport, are about an hour and 40 minutes away by car. Malaga and its international airport are about two hours southwest.

The city of Granada, a cultural hub in the autonomous Spanish community of Andalusia with about 240,000 residents, may be best known for its historic architecture and monuments, but for Andalusians it’s also the capital of Granada province, serving as an employment and lifestyle center.

The city’s housing stock mostly consists of apartments that are, on average, 40 to 50 years old, said Mario López Hiraldo, a real estate agent with Century 21 Avanza, based in Granada. Supply of new homes in the city is tight, and is expected to remain tight given the scarcity and cost of buildable land, he said.

Home prices are lower in Granada’s ring of suburbs, with their mix of apartments and newer single-family homes. There is also more space for new housing developments, Mr. López Hiraldo said.

The average home price per square meter in the cityis now 1,586 euros ($170 a square foot), he said, citing figures from Spain’s association of registrars. That reflects something of a rebound. Pandemic-based predictions that buyers would forsake cities in favor of rural properties didn’t play out in Granada, Mr. López Hiraldo said. Instead, buyers looked for homes with outdoor space, both in the city and around it.

“During the pandemic and the period of confinement, when people were shying away from in-person visits, we shifted to virtual visits,” he said. “When things opened up again, there was a lot of pent-up demand from people who had been waiting and watching during the confinement, and that explains why there were so many sales afterward.”

Across Spain, housing prices rose about 2.4 percent from the first to the second quarter of 2021, according to data from the National Institute of Statistics — the largest quarterly gain since mid-2018. Granada has followed suit. According to Tinsa, a leading Spanish real estate valuation company, home values in the city climbed by 4.7 percent in the first nine months of 2021, reaching 1,607 euros a square meter ($173 a square foot), after falling 7.2 percent between the fall of 2019 and fall of 2020. (However, Mr. López Hiraldo said, sale prices have sagged by about 3 percent since January, suggesting a cooling off after prices and demand spiked in late 2020.)

The main bedroom suite has French doors opening onto the terrace, with a small office space next door.Credit…Courtesy of The Singular Space

Susana de la Riva Anel, Tinsa’s director of marketing and communication, said the pandemic had a huge impact on the fluctuating values. “When comparing a moment of decline (2020) with one of recovery (2021), ‘striking’ percentages are on the rise,” she said via email. Yet the current average value in the city is around where it was at the end of 2019, she added.

Sergio André, CEO of Seville Sotheby’s International Realty, which focuses on the Andalusia region but not Granada, said many homeowners decided to sell their vacation properties during Covid-19 lockdowns because they could not travel within the country. “Although Madrid, Barcelona and Marbella occupy the top positions in the market, in the past two years the high-end market has been strengthened in Andalusia,” Mr. André said via email, adding that his company’s sales increased by 30 percent during this period.

After the travel restrictions among Spain’s 17 autonomous regions ended, the vacation-home market was “activated again,” Mr. André said. “Thanks to the flexibility of many companies and the increase in teleworking, many people are making their holiday homes their first residence for much of the year.”

Ms. Vela said distinctive homes are in high demand nationwide, with buyers seeking natural environments and setups that allow remote work and school. “Prices are quite stable,” she said. “After what 2020 has thrown at us, there’s one thing at the top of every home buyer’s list: green space. With remote working and online classes, we need comfortable spaces for every activity.”

Who Buys in Granada

Mr. López Hiraldo said that foreigners make up about 20 percent of his firm’s buyers. On the Andalusian coast, he added, they make up roughly 35 percent of the market, depending on the kind of home and the region, he added.

Foreign buyers in Granada tend to come from France, Britain, Germany, Sweden and Belgium, he said.

Across Spain, in the distinctive-house market, Ms. Vela said international investors are present particularly in the north (especially near the French border), in the south and in the Balearic Islands.

The central courtyard has a covered walkway surrounding a fountain, olive trees, wisteria and rose plants, and several seating areas.Credit…Courtesy of The Singular Space

Foreigners can buy real estate without restrictions in Spain.

However, Mr. André said, they must obtain a Foreigner Identity Number, which costs around 15 euros ($17) and is “generally not denied as long as foreigners justify their economic, professional or social interests related to Spain.”

Buyers typically pay around 10 percent of the purchase price in closing costs, he added. These cover notary fees, a patrimonial tax for secondhand properties and the property registration.

Notaries handle transactions in Spain, and each party may also decide to hire a lawyer, Ms. Vela said. Foreigners can get mortgages in Spain, she added.

On the Portuguese Coast, an Appealing Spot for Seaside Homes

$500,000 Homes in Georgia, the District of Columbia and Florida

House Hunting in Mexico: A Modern Hillside Masterpiece in Acapulco