Recently married and looking to move out of their rental townhouse in Woodbridge, N.J., Shaun and MaryJo Spiller set their sights on Readington, N.J., the Hunterdon County town where Mr. Spiller was raised. The couple looked at several homes last fall, putting in one bid that fell through over problems with the house’s septic system. Around Christmas, Mr. Spiller’s father told him about another house newly on the market: the one the younger Mr. Spiller grew up in.

“Everything was exactly the same,” said Mr. Spiller, a 28-year-old data engineer for the Institute of Electrical and Electronics Engineers, describing the couple’s tour of his childhood home. “Even my old bedroom was the same electric-blue color.”

The house, which has three bedrooms, was in their price range and in the desirable Whitehouse Station area of Readington. But demand was high, as the post-Covid housing market had heated up in rural areas, and more than a dozen people lined up for the first open house. With an offer on the table, which they later increased, the Spillars hoped to improve their chances by sending a letter to the family who bought the house in 2004 from Shaun’s parents, who had moved elsewhere in Readington. In it, Mr. Spiller thanked them for taking such good care of the house and asked if they could buy it back.

“We offered a fair price, but I’d like to think the letter made the difference,” he said. The Spillers bought the house, which was built in 1940 and has a covered porch, for $403,000 in February, and have since built an addition and painted the blue bedroom beige, using it as a home office.

With its deep roots in farming, open space has long been a defining element of this 48-square-mile town, home to about 16,000 people, 93 percent of them white, according to census data. In 1978, seeking to avoid the kind of overdevelopment that occurred in neighboring Somerset County, Readington became the first municipality in New Jersey to put an open-space referendum on the ballot, asking residents to vote for a $1 million bond to preserve farmland and check development. The referendum was approved, and since then Readington has preserved 9,000 acres — nearly a third of the town — through a combination of land acquisition, the purchase of farmers’ development rights and cluster zoning.

“It was a grass-roots effort by those who moved here in the 1970s looking to get away from the hustle and bustle and suburban sprawl,” said Mayor John Albanese, who moved to Readington two years after the referendum passed. “They didn’t want to see the whole town turn into the place they had moved away from. There was definitely an element of ‘I’m pulling up the ladder as I’m getting in the door here.’ But either you do that, or you don’t do anything and it becomes fully developed.” 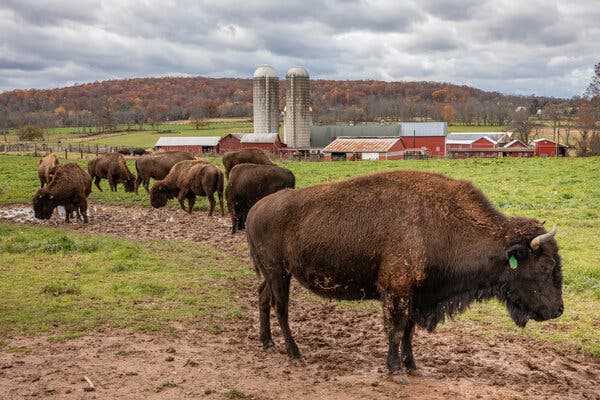 As the easternmost town in Hunterdon County, Readington is accessible to urban areas and business corridors but is a bit more affordable than counties closer to New York City, which is about 55 miles east of Readington.

“People start out in Basking Ridge or Bernardsville, then they come to Readington and find they get more for their money,” said Patricia Deseno, an agent with Coldwell Banker who moved to Readington in 1975. “The further west you go, the more you get.”

That’s what Terra and Brian Kremer learned during their Readington home search in March of 2018, when they flew in from Utah and spent a weekend with Ms. Deseno looking at 19 houses within a 20-minute radius of Raritan, where Ms. Kremer, an employee of Johnson & Johnson, was being relocated. A microbiologist currently working on her Ph.D., Ms. Kremer, 40, said they wanted a house with a finished basement for their two young sons, room for a home office and “a lot of space, to feel like we were living in the country.”

They found all that in a 1994 four-bedroom house on three acres that backs up to preserved green space, which they bought that spring for $540,000.

“We live on a quiet road with lots of space, and lots of good friends,” Ms. Kremer said. “Oddly enough, I tell people we moved to New Jersey for peace and quiet.”

Spread out at the base of Cushetunk Mountain, Readington’s rolling hills, wooded preserves and vast farmlands offer a bucolic setting for residents. With large swaths of the town set aside for open-space preservation, the residential neighborhoods are mostly either newer developments built on former farmland, or village hamlets like Stanton, Whitehouse, Whitehouse Station and Three Bridges.

The Whitehouse area occupies a stretch of Old Highway 28, just north of Route 22, which is lined with quaint Victorian and colonial-style homes, as well as the famed Ryland Inn restaurant. Whitehouse Station (a name some use interchangeably with Readington) is south of Route 22, with the town’s main commercial area running along Route 523, home to the historic Whitehouse Station train station as well as several restaurants and stores. Three Bridges, in the southern end of town, is another historic area. It is named for the three bridges that cross the South Branch Raritan River.

Most of Readington’s newer homes sit on two or more acres, and have been built in the past 20 to 30 years. As part of its efforts to curtail development, the town has established cluster zoning that requires developers to leave 80 percent of an acquired property undeveloped, while limiting the number of houses that can be built on the remaining 20 percent. No applications have been submitted for such developments in the past five years, Mayor Albanese said.

There are two townhouse developments and two 55+ communities in town. About 90 percent of the homes in Readington have their own wells and septic systems, with only the commercial and village areas connected to the town’s sewage and water systems.

Older farm properties rarely come on the market, but when they do, the town’s historic board often gets involved, according to Tara Stone, an agent with eXp Realty. “They take a lot of pride and are very passionate about these properties,” Ms. Stone said. “It makes for a beautiful town, and it keeps the integrity of what Hunterdon County was built upon: the farm system.”

One of those historic farms — a five-bedroom eight-bath house, built in 1845 on 13.5 acres — has a pool and tennis court and is listed for $1.649 million, the most expensive Readington home currently on the market. At the low end is a one-bedroom, one-bath house on Route 523, listed for $250,000.

The median sale price of houses in Readington from January to mid-November of this year was $518,000, a 5 percent increase over the same period in 2020, when the median was $492,000, according to the Garden State Multiple Listing Service.

The beauty of the area draws weekend tourists, though locals also frequent the working farms that are open to the public, including Readington River Buffalo Farm, which sells bison meat harvested from the herds raised there. Schaefer Farms has a year-round farm stand, plus pumpkin picking and spooky horror trails in the fall.

For the sportier set, there are hiking trails throughout the 380-acre Cushetunk Mountain Preserve, boating and swimming in the Round Valley Reservoir within that mountain preserve, and golfing at the Stanton Ridge Golf & Country Club. Horseback riding is another popular pastime, and there are more than 20 miles of trails throughout Readington, some of which cut through private property where the residents have provided a right of way.

Readington’s biggest draw comes in July, when the country’s largest hot-air-balloon festival takes flight at Solberg Airport, with more than 100 balloons floating above the town’s fields and homes. Some residents get out of town for this busy three-day weekend, Ms. Deseno said, but others wait for a balloon to accidentally touch down on their property, earning them a complimentary bottle of champagne from the balloon’s errant navigator.

With a Rite Aid and Kings supermarket, the Whitehouse Mall on Route 22 provides local shopping for those who don’t want to travel to Bridgewater or Flemington.Credit…Tony Cenicola/The New York Times

From there students move on to Hunterdon Central Regional High School, in neighboring Flemington, where they are joined by students from four other towns. The school serves 2,644 students, with four magnet programs, a top-rated YouTube television station and 75 advanced placement or honors courses, 18 of which accrue college credits. Average SAT scores at the regional high school this year were 593 in reading and writing, and 598 in math, compared with statewide averages of 562 and 563.

Private schools in the area are limited, but include Acorn Montessori School in Lebanon, for prekindergarten through seventh grade.

The drive from Readington to New York City, going east along Route 78, takes an hour to 75 minutes or more, depending on traffic. New Jersey Transit offers train service from Whitehouse Station to Penn Station, requiring a transfer in Newark. The whole trip takes about an hour and 40 minutes, and costs $16 one way or $451 for a monthly pass. Bus service on New Jersey Transit is available between neighboring Raritan Township to the Port Authority, with the trip taking just over two hours and costing $13 one way and $303 monthly.

Readington’s public library is housed in the town’s original train station, built in 1892 and designed by Bradford Gilbert. The building became a library in 1981.Credit…Tony Cenicola/The New York Times

Now serving as the headquarters for the Readington Museums, the Bouman-Stickney Farmstead dates to 1741, when the Dutch farmer Thomas Bouman built a Dutch farmhouse and barns on 68 acres. In 1935, the Broadway playwright and producer Howard Lindsay bought the property for his wife, the actress Dorothy Stickney. The couple used the house as a weekend retreat, entertaining Broadway luminaries such as Julie Andrews, Shelley Winters and Oscar Hammerstein, who is said to have written the score to “The Sound of Music” there.

Bloomfield, N.J.: A Walkable Suburb With Plenty of Green Space

Getting Packages in My Building Is Chaotic. What Can I Do?

Homes for Sale in Brooklyn, Manhattan and the Bronx