Matthew Rhys never planned on buying an old wooden boat that would take four years, tens of thousands of dollars and quite a bit of his own manual labor to restore. But one night he was drinking whiskey and clicking through eBay, and, well, one thing led to another.

Asked if there had been a bidding war for his 1930s Wheeler Playmate — Ernest Hemingway famously owned one — Mr. Rhys laughed so hard that he did an actual spit take.

“No, and I’ll tell you very simply why. Because anyone who knows boats won’t go near a wooden boat,” he said. “And the people who I knew who do have boats, when I said, ‘I’ve bought a wooden boat,’ would say, ‘What? You idiot.’”

But Mr. Rhys and his partner, the actress Keri Russell, happen to enjoy chartering wooden boats. They even celebrated Ms. Russell’s 40th birthday aboard one. Mr. Rhys is also a big fan of the 1930s — he’s currently playing the era’s most famous attorney, Perry Mason, on HBO — as well as of Mr. Hemingway. (Mr. Rhys also loves Hemingway puns: He named his charter company Moveable Feast NYC, and its website asks, “For whom the boat tours?”)

And then there was the boat’s name: Rarebit. Mr. Rhys, despite his extremely convincing onscreen American accent, is Welsh. “I was like, ‘Oh my God, it’s a sign. It’s a sign from the heavens that I must buy this boat,’” he said.

So he rescued it from a marina in California for a cool $30,000, with the intention of fixing it up and chartering it. “I had this strange rose-tinted notion that this could be the perfect business,” Mr. Rhys said. “You buy a Brooklyn boat, bring it back to Brooklyn, restore her, keep her in Brooklyn.”

Reality hit hard when Rarebit arrived. For one thing, the only boatyard willing to take her was in New Jersey; apparently the industry has a big problem with people dumping old wooden boats, an inclination Mr. Rhys would soon come to understand. And then there was the shifting timeline. Before he started the project, Mr. Rhys, 46, thought the renovation would take six months. It ended up taking four years. 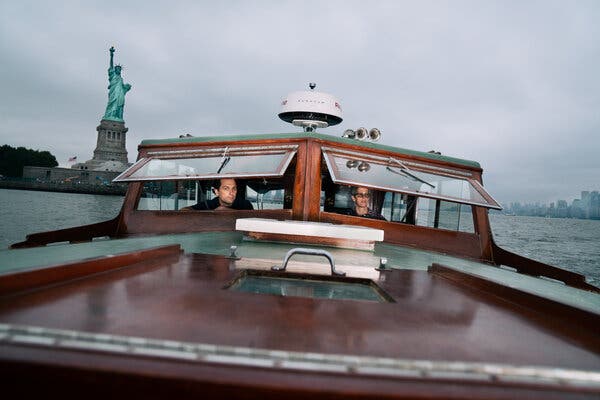 “He’s really one of the only men that I’ve ever worked with in this industry that does not make assumptions about what I know, don’t know,” Kelli Farwell said of working with Matthew Rhys.Credit…Peter Fisher for The New York Times

In a way, Mr. Rhys’s timing was perfect. After a year of working with three different contractors, who all managed to over-promise and under-deliver, he found a seasoned expert in need of a fresh start: Kelli Farwell, who had hosted Ms. Russell’s birthday party on her wooden boat, the Water Table.

Unfortunately for Ms. Farwell, but luckily for Mr. Rhys, the Water Table had been unceremoniously sunk the year prior. A steel tugboat had smashed into it while it was docked, wrecking its keel and submerging its engine, essentially totaling the vessel.

“I was so heartbroken,” Ms. Farwell said. “It would almost be like, if you had lost somebody that you loved forever. I just couldn’t believe it.”

She had been working on the New York City ferries and figuring out her next move when Mr. Rhys emailed her to say that the restoration hadn’t been going well. She agreed to meet him at the New Jersey boatyard. She saw the sorry state Rarebit was in, and thought it looked as if a bomb had gone off.

“My goal in the beginning was to just be the one person that’s honest with him about this and not hide the hard truths,” Ms. Farwell said.

As it turned out, Ms. Farwell, 50, didn’t have to say anything. “That’s when I realized how bad things were going, with just the look on Kelli’s face,” Mr. Rhys said.

So she started showing up every day simply to lend a hand. “Just sanding and doing some caulking and skilled labor stuff. And then just, over time … I was always the one coming, and everybody else just stopped coming.”

As Ms. Farwell stepped into the lead restoration role, both parties benefited from the arrangement. Mr. Rhys finally had a partner willing to level with both him and the wood saw, and Ms. Farwell, just the fourth-ever female captain in New York harbor, found in Mr. Rhys a welcome exception to the toxic boys club atmosphere she often encountered on the docks.

“I mean, not for nothing, but most men, when they walk in, will say they’re right about everything. Matt is not like that. That’s why I love him and we work so well together,” Ms. Farwell said. “He’s really one of the only men that I’ve ever worked with in this industry that does not make assumptions about what I know, don’t know.”

Mr. Rhys was looking around on eBay when he found the boat, named Rarebit. Credit…Peter Fisher for The New York Times

Mr. Rhys said that watching how Ms. Farwell is treated by men in the maritime industry has been “an eye-opener” to him. “It’s like the prehistoric age,” he said. “It’s like, Jesus, we are stuck in the ’30s here,” Mr. Rhys said.

So they decided to handle everything in-hull. They stuck with experts for the engines and the electrical work, but everything else they did themselves, almost entirely by hand. When they had questions, they turned to YouTube. Ms. Farwell, for example, built the wood benches lining the deck and installed the interior plumbing herself after watching tutorials online. She even tiled the bathroom floor.

There were small setbacks, like the time Ms. Farwell cut off part of her thumb while cutting the rail with a table saw, shocking Mr. Rhys and a guest who had stopped by to see how things were going. But before long, they found themselves in uncharted waters: making actual progress.

“Every time that Matt and I just sort of took it on ourselves to sort of clean up whatever mess might have been there, we had our best successes,” Ms. Farwell said.

Together, they cleaned up the seams and did all the caulking and epoxying. They even mastered the art of splining, a technique of bending wood, though that too wasn’t without its challenges. To bend the wood strip that became the hull railing, they had to build a plastic trench and soak the oversize mahogany strip for days. When it came time to mount, it was a cold day and they could feel the wood drying out as they transferred it from the water to the hull, threatening to snap.

“We weighted it down, and we kept it in the trench for a long while,” Mr. Rhys said. “And then when it was totally saturated, we drilled the holes, then one day we just mounted it, and we slowly screwed this whole bowed rail all the way around the bow of the boat. It was one of the most gratifying days of my life.”

Ms. Farwell described that moment as a turning point. “From that point on, I think we really felt like, ‘Just the two of us are capable enough to finish this boat,’” she said.

In November 2020, Rarebit finally returned to the ocean. Given the number of times Mr. Rhys had to have the hull redone, they opted out of smashing a champagne bottle in celebration, though they did sage the whole thing. After running a second successful sea trial in April, they set about making her official charter launch this summer and even found a Brooklyn marina to dock her in. It’s the only wood boat there, and the gleaming mahogany stands out among the uniformly fiberglass fleet while 1930s jazz tinkles out of the cabin.

Now that the boat is seaworthy, Ms. Farwell has resumed her regular captain duties, with Mr. Rhys as her occasional chief stew. When he’s in town, he likes to lead the charters, passing out charcuterie plates, and even preparing traditional Welsh rarebit on the open seas using a blowtorch. Recently, he ferried guests around at a Loro Piana event, and has plans to host Wes Wheeler, the grandson of the man who built his boat.

Since there’s no real agreement on Mr. Hemingway’s favorite drink, Mr. Rhys is happy to serve guests whatever they want. He just struck a partnership with Talisker whiskey, and he’s also been known to muddle a mojito on request.

Mr. Rhys’s family had somewhat different priorities. “They’re like, ‘Yeah, it’s OK.’ It’s amazing,” he said. “We spent three and a half years and then they go, ‘Did you bring Pirate’s Booty?’ You’re like, ‘You’re on a boat next to the Statue of Liberty. Shut up.’”

Tags
Had One She Ti̇me Who

Life as a Pair Began at His Table for One

The Welcome Return of the Run-In

Get a Whiff of This