I step into the tobacco field as the first rays of sunlight begin to pierce the early-morning fog. The men of the cutting crew are already hard at work harvesting the tall burley tobacco plants that have taken root in the soil over the past few months. The sound of hatchets resonates across the field: thwack, thwack, thwack.

With each swing, another tobacco plant is felled in the fields of Shelby County, Ky. 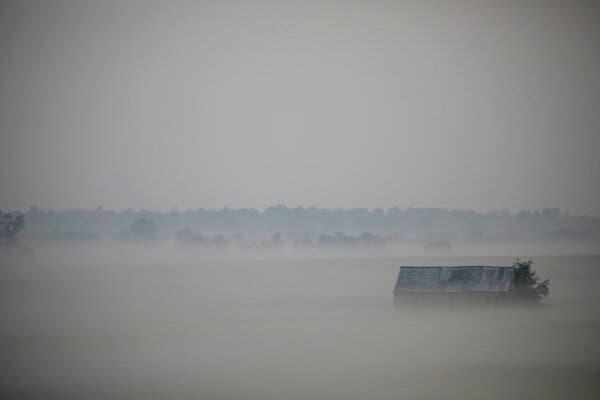 The workers skewer freshly cut plants onto a wooden tobacco stick, five at a time, the slender metal cone placed at one end of the stick allowing them to pierce the fibrous stalk. Their shirts are already completely soaked through — not just with sweat, but with the morning dew that coats the green and yellow leaves of the tobacco plants.

Over the course of the morning, the field slowly transforms from a leafy jungle into a set of uniformly shorn rows.

David Alvarado Garcia, who traveled from Nicaragua to work on Tucker Farms during the tobacco harvest, uses his hatchet in the field.

Driven by my interest in the cultures and traditions of my home state of Kentucky, I photographed my first tobacco harvest eight years ago. Each year since then, I’ve eagerly returned.

Tobacco — the product shown in these photographs is used in cigarettes — is an agricultural product unlike any other. Its use has been declining in the United States since the mid-1960s. As of 2018, about 34 million American adults, or about 14 percent of the population, smoked cigarettes, according to the Centers for Disease Control and Prevention. In 1965, that number stood at 42 percent. Cigarette smoking remains the leading cause of preventable disease, disability and death, according to the C.D.C.

Historically, the plant’s cultivation has relied on the labor of both enslaved and impoverished people. Before 1865, enslaved workers were a major source of labor in Kentucky’s tobacco fields. (North-central Kentucky relied on slavery more than any other region in the state.) In recent years, foreign workers have done the grueling seasonal work that Americans largely avoid.

As a photojournalist, I’ve long felt that the men who perform this work deserve to be seen, and their labor acknowledged.

After sitting in the sun, the tobacco is housed in barns, where it will cure for at least six weeks.

Once a field is harvested, the sticks of tobacco are left in place for a few days to cure in the late summer sun. Next comes the housing. The sticks, heavy with the weight of five stalks, are loaded onto wagons and towed to nearby tobacco barns. The crew starts work early, just as they do on cutting days.

Inside the barns, scaffolds of heavy timber beams reach from the ground to the roofs. Some of the men hoist themselves up and climb high into the rafters. One by one, the loaded sticks are lifted up.

In barns across Shelby County, the tobacco leaves will slowly cure for at least six weeks. During that time, the color of the leaves transitions from a vibrant yellow to a flat, dark brown. Eventually the leaves will be stripped down to the stem and sold at market.

Pablo Medina Pena rests for a moment in the rafters of a barn.

Ray and Stephanie Tucker of Tucker Farms have run a tobacco farm together in Shelby County since they were married 27 years ago. (Ray’s family has been in the business for six generations, and Stephanie’s for four.) They grow crops across several towns, including Bagdad and Pleasureville.

Despite others’ qualms about the product, the Tuckers plan to continue to grow burley tobacco as long as it remains economically feasible. “The crop is not only important to us, but also to support the 26 families of our workers,” Stephanie Tucker said.

This year, their crews harvested 200 acres’ worth of tobacco, which was housed in 45 individual barns.

Working at sunrise, Wilfredo Espinales Arce unloads a tobacco stick from a wagon.

Compared with the farming of corn and soybeans, which provide the majority of Tucker Farms’ agricultural portfolio, the process of cultivating, harvesting, housing and stripping tobacco remains largely the same as it was 100 years ago.

One thing that has changed, however, are the workers who harvest the Tuckers’ crops.

For the last 22 years, the Tucker family has relied on foreign workers who enter the country under the H-2A program, which brings temporary agricultural labor to the United States.

Twenty-five men from Nicaragua and one from Mexico travel to Shelby County for the harvest. The labor is physical, repetitive and exhausting. Long days are punctuated by a few short breaks and a lunch of home-cooked beans and rice.

Tobacco leaves cure inside a barn.
A tobacco knife and a tobacco spike, which, placed at one end of a stick, allows workers to pierce the tobacco plant’s fibrous stalk.

There’s no escaping the harsh realities of the job. The working conditions are uncomfortable. The work itself is strenuous. Health experts have long pointed to the serious threats workers face from nicotine poisoning, pesticides and dehydration. And yet the same group of men leaves their homes and return year after year to work for the Tuckers.

Most of the workers, who were paid $12.96 an hour this year, send a majority of their paychecks home to their families. In Nicaragua, where a recent estimate placed the living wage in the capital, Managua, at $360 a month, the hard-earned money goes a long way.

The tobacco grown on Tucker Farms is sold at market for use in cigarettes.
In 1965, 42 percent of Americans smoked cigarettes. By 2018, that number had fallen to 14 percent. Still, cigarette smoking remains the leading cause of preventable disease, disability and death, according to the C.D.C.

“I come back to Kentucky each year because that’s where my work is, and it pays much better than working in Nicaragua,” said Felipe Ponce, a crew leader from the coastal town of Corinto who has worked for the Tuckers for 20 years.

With his earnings, Mr. Ponce said that he’s able to support his family back home — his wife, his three daughters and his mother, all of whom he stays in contact with via daily WhatsApp calls.

Felipe Ponce, the crew leader at Tucker Farms, discards a handful of twine from atop a pile of tobacco sticks.

For the Tuckers and the men who work for them, the weather is one of the big challenges. A cold spring and an abundance of rain significantly delayed this year’s planting. A rainy harvest season in August and September again put pressure on their ability to cut and house in a timely manner.

Visa complications and lingering pandemic-related travel restrictions also prevented a number of the workers from arriving on time. Ballooning costs of fertilizer, fuel and a growing scarcity of spare parts for their farm equipment also threatened the business.

For me, documenting the tobacco harvests is a highlight of working as a photographer in Kentucky. Reuniting each year with the crew is a joy. I marvel at their skill, ingenuity and efficiency.

My hope is that the men whom I’ve photographed for the past eight years know the respect and admiration I feel for them.

For the last 22 years, the Tucker family has relied on foreign workers who enter the country under the H-2A program, which brings temporary agricultural labor to the United States.

At the end of each long day, the harvesting crew returns to their bunkhouse at Tucker Farms, where they split into groups and begin preparing dinner for themselves. Leftovers from dinner pull double duty as the next day’s lunch.

Once their food prep is complete, the men settle into an evening routine: laundry, cards, television. They also connect with their families back home.

As the summer sun sets below the horizon, the workers turn in for the night. In just a few hours, they’ll be back in the fields with a hatchet in one hand and a stalk of burley tobacco in the other.

A group of workers arrives at a barn in Pleasureville, Ky.

Tags
Crew Harvest Home One Who

Omicron and Holiday Travel: How to Strategize

What’s the Deal With Masks on Planes?