MOSCOW — Dmitri A. Muratov,the editor of Novaya Gazeta, perhaps Russia’s bravest independent newspaper, will become the third Russian to be awarded the Nobel Peace Prize on Friday in Oslo. He accepts the honor as the legacy of his two prize-winning predecessors, Andrei D. Sakharov and Mikhail S. Gorbachev, is under greater threat than at any time since the collapse of the Soviet Union.

The two previous laureates won the prize before the Soviet collapse: Mr. Sakharov, the dissident physicist whom the committee called “a spokesman for the conscience of mankind,” received the prize in 1975 for his struggle for human rights.

Mr. Gorbachev won in 1990, in the U.S.S.R.’s last days, as its final president. The Nobel committee cited the “greater openness he has brought about in Soviet society.”

In a gesture that links their accomplishments over the span of three decades, Mr. Gorbachev contributed some of his Nobel money to help establish Novaya Gazeta, which Mr. Muratov has overseen for more than 25 years and whose work won him the Nobel.

But in contemporary Russia, human rights, openness and freedom of expression have been deteriorating for years, activists and opposition figures say. A more intensive crackdown began in January, when protests in support of Russia’s most famous political prisoner, Aleksei A. Navalny, were brutally suppressed.

“The situation is extremely difficult,” Mr. Muratov said on Sunday night in Moscow at a reception hosted by the Norwegian Embassy. “It is toxic.”

Maria Ressa with Mr. Muratov in Oslo on Thursday. The Nobel committee cited their “courageous fight for freedom of expression.”Credit…Ntb/Via Reuters

Ms. Ressa was convicted of cyber libel in 2020, making it difficult for her to leave the country. She said Thursday at a news conference that she needed to get four courts to approve her travel to attend the ceremony in Oslo.

The Nobel committee cited the pair’s “courageous fight for freedom of expression.” They were the first journalists to win the Nobel Peace Prize since 1935, when it was awarded to Carl von Ossietzky, a German who was then detained in a concentration camp by the Nazis. Ms. Ressa has said she believes theNobel committee’s focus on journalists this year signaled that, once again, “we are on the brink of the rise of fascism.”

Mr. Muratov lamented on Sunday that “Propaganda has convinced the majority of the Russian people that democracy is harmful and that it leads to collapse.’’

He accepted the award as some 100,000 Russian troops were massing on the country’s border with Ukraine, raising anxieties about a potential invasion. At a news conference on Thursday in Oslo, Mr. Muratov warned that authoritarianism is inextricably linked to war.

“Disbelief in democracy means that the countries that have abandoned it will get a dictator,” he said. “And where there is a dictatorship, there is a war. If we refuse democracy, we agree to war.”

It was a message similar to the one contained in Mr. Sakharov’s Nobel address in 1975. It was delivered by his wife, the activist Yelena Bonner, because he was barred from leaving the Soviet Union to deliver it in person.

Mr. Sakharov is considered the father of the Soviet hydrogen bomb. Realizing the destructive power of nuclear weapons andconcerned about the ethical implications of his work, he later became an advocate for nuclear disarmament and human rights.

In 1970, after he had been banned from nuclear research for his calls to de-escalate the arms race with the U.S., he co-founded the Committee on Human Rights in the Soviet Union. He was subject to frequent scrutiny from Soviet intelligence, the KGB, and sent into internal exile in 1980 after he condemned the Soviet invasion of Afghanistan.

He returned to Moscow after receiving a welcoming phone call from Mr. Gorbachev in December 1986. Mr. Gorbachev had initiated a period of glasnost, or openness, and perestroika, a reconstruction of the political and economic system of the Soviet Union.

Around that time, in the heady era of new beginnings and hectic experiments with democracy, Mr. Sakharov became involved with a group of activists who were collecting testimonies about the Stalin-erasystem of labor camps known as the Gulag, whose brutalities had been hidden until the late Soviet period.

The group called itself Memorial, and at Mr. Sakharov’s funeral, on December 18, 1989, Mr. Gorbachev agreed to allow the organization to register as a legal entity, according to one of its founders,Lev Ponomarev.

Today, Memorial is labeled a “foreign agent,” a derogatory distinction given by the Justice Ministry. More concerning, it faces closure, accused by prosecutors of “justifying terrorist activities” because of its support for political prisoners.

Lev Ponomarev, a rights activist at a rally in Moscow, Russia, in 2018. Memorial, the rights group he help found in 1989, was recently labeled a “foreign agent” by the Kremlin.Credit…Yuri Kochetkov/EPA, via Shutterstock

Court proceedings against the organization will continue next week.

The Sakharov Center, a non-governmental organization established in 1990 to preserve the dissident’s memory, has been listed as a “foreign agent,” since December 2014, making it all but impossible for it to partner with schools on education programming.

The center has been marking the centenary of Sakharov, who was born in 1921. Regional museums and libraries approached the foundation hoping to organize exhibitions about Sakharov, said Sergei Lukashevsky, the organization’s director.

“When they found out that we are a foreign agent organization, they withdrew,” he said.

The foreign agent label “suggests that Sakharov’s ideas are not those of our famous compatriot but those of an ‘agent’ who had acted in the interests of foreign states and possibly against Russia’s interests,” the dissident’s granddaughter, Marina Sakharova-Liberman, said in an interview. “This insinuation is absurd.”

Mr. Ponomarev said that in many ways, the current political climate in Russia is similar to that of the period in which Mr. Sakharov was being persecuted, though in some ways, he said, it was worse; he cited the killing and poisoning of opposition politicians, and the targeting of journalists.

Portraits of Dmitry Muratov, on the left, and Maria Ressa, on the right, displayed at the Oslo’s Nobel Peace Center on Thursday.Credit…Odd Andersen/Agence France-Presse — Getty Images

Aleksandr Baunov, editor in chief of the Carnegie Moscow Center’s website, said the Kremlin’s crackdown this year shows it is afraid of the power of an individual or of free expression — just as it was during the Soviet period.

“There was a huge Soviet Union, it was strong— with weapons and factories,” he said. “And there were dissidents — small, but honest, and with foreign support. And they won. Yes, the state is strong, and Memorial is weak. But the Soviet Union also seemed strong, and the academic, Sakharov, was weak. And who won in the end? Sakharov.”

Novaya Gazeta is one of the few independent media outlets that has not yet been named a “foreign agent,’’ and to date Mr. Muratov seems to have found a way to be a vocal government critic without pushing the boundaries too far. However, nothing is guaranteed in Mr. Putin’s Russia. The president said shortly after the award was announced that the Nobel would not be a “shield’’ that protects Mr. Muratov.

Weeks later the paper, and Mr. Muratov personally, were fined a total of 132,000 rubles ($1,800) for failing to mention that two groups they wrote about affiliated with Mr. Navalny had been listed as “foreign agents.”

The crackdown, said Mr. Ponomarev, who is personally acquainted with all three Russian Peace Prize laureates, was driven by the same “inertia of repression” that was present in the Soviet period.

“They are accelerating their downfall, and they cannot stop it,” he said.

Israel approves a 4th dose of Covid vaccine for those with compromised immune systems.

Manitoba Names a New Premier, but a Rival Asks a Court to Quash the Action 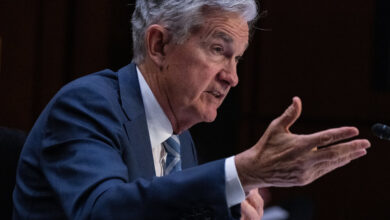 Fed officials may be encouraged by the labor data.