PARIS — At the Marché d’Aligre, a bustling open-air food and antiques market in the Bastille district of central Paris, Mohamed Sharif grabbed a piece of chalk and reluctantly marked up the price of the fragrant Valencia clementines that he sells to throngs of shoppers.

Transport costs for produce imported to France had more than doubled since autumn amid a surge in gasoline prices, he said, one of several factors that have driven up wholesale costs for oranges from Spain, lychee from south China and passion fruit from Vietnam — and the prices he must charge at his fruit stand.

“Customers don’t understand why they are having to pay more for what they buy,” Mr. Sharif said, pricing a pound of clementines on a recent weekend at 1.90 euros (about $2.15), up from 80 cents ($0.90) a week earlier. “People are buying less because costs are going up.”

Meat prices at a nearby butcher are up 10 percent since the summer. Some French cheeses are expected to rise 20 percent in the new year. Even the traditional baguette, a staple of the French diet, will get more expensive, bakers say.

Inflation, relatively quiet in Europe for nearly a decade, is starting to make itself felt as high energy prices, labor shortages and supply-chain bottlenecks set off by the end of pandemic lockdowns course through everyday life.

A record annual increase in prices, to 4.9 percent in the eurozone last month, is affecting Europe’s businesses, factories and commerce. But people trying to put food on the table are also beginning to get squeezed. 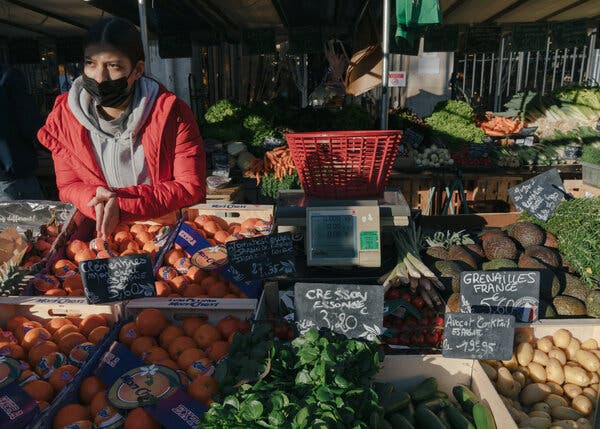 The Costaz stand at the Marché d’Aligre in Paris. The family has operated a greengrocer stand since 1905.Credit…Andrea Mantovani for The New York Times

The European Central Bank previously insisted the spike would be temporary. But last week, the bank was compelled to lift its inflation forecast for 2022 to 3.2 percent, from 1.7 percent projected in September, amid signs that rising prices won’t be as transitory as thought.

That is hardly news to habitués of the Marché d’Aligre, Paris’s oldest food market, founded in 1779. Animated by generations of shopkeepers, the market is a reflection of the city itself, attracting low-income families, middle earners and affluent foodies who flock to fresh produce, cheeses, spices and flea-market bargains.

The outdoor fruit and vegetable sellers are known as the least expensive in Paris, and strive to maintain affordable prices for basics like tomatoes and potatoes no matter the economic climate, said Rémy Costaz, whose family has operated a greengrocer stand since 1905.

But costs for a wide variety of goods, from pork to passion fruit, have climbed with the inflationary surge. Among the market’s stall keepers and modest-income shoppers, the impact is already being felt. And many are preparing for worse.

Simone Ginestet, a retiree living on a fixed pension, traveled 45 minutes by train from her apartment near Versailles for fruits and vegetables. Apple prices in her middle-class neighborhood jumped to €6.50 a kilo, while pears had reached €7 a kilo, up 10 to 20 percent in two months, she said.

“It’s huge,” Ms. Ginestet lamented, rummaging at a cut-rate table where baskets of nearly expired pears were priced at €1. “Especially when you have modest means, how do you make it?”

At the south end of the market, where discount food sellers abound, people toting wheeled shopping bags swarmed around La Petite Affaire, a minimart that sells dairy products, cold cuts and other foods near their expiration date for less than half-price.

La Petite Affaire, a mini-mart that sells foods near their expiration date for less than half-price.Credit…Andrea Mantovani for The New York Times

Hicham El Aoual, 27, opened a bag to reveal his purchases: orange juice, yogurt and other basics that cost him €15. These days, he said, he tries to avoid big French supermarkets, where prices for the same basket of goods are nearly double.

Mr. El Aoual, who has worked in real estate and as an internal auditor for large supermarket chains, said higher transport, energy and warehouse storage costs had steadily bumped up what people paid for groceries since governments ended pandemic lockdowns.

“The problem,” he said, “is that prices are rising but salaries aren’t.” Mr. El Aoual added that he had not had a raise in three years. “I have a tight budget, its hard to save, and I have to shop at the discount store,” he said.

Not everyone is feeling the price increases in the same way. Inside the Marché Beauvau, the Marché d’Aligre’s historic covered market, featuring higher-quality butchers, fishmongers, and cheese and poultry sellers, shoppers were eyeing capon, oysters and truffles for the holidays.

Florian Bocciarelli, who runs the Boucherie du Marché d’Aligre, like his father and grandfather before him, smiled beneath the twinkle of holiday lights as he wrapped a €44 glass pot of foie gras for a customer.

Yet more often than not, Mr. Bocciarelli said, his clients are increasingly buying products like pork, which is cheaper than other meats. Since summer, a jump in the price of cereals, soybeans, corn and wheat used to feed animals has pushed up the price of steak, veal and lamb an average of 10 percent.

At bakeries around France, including Farine + O, an artisanal boulangerie, the price of a traditional baguette is projected to rise up to 10 cents in the new year.Credit…Andrea Mantovani for The New York Times

“People are being more careful about their consumption,” he said. “Nobody is really expecting prices to go back down.”

At the Comptoir des Fromages et de la Bière, an artisanal cheese and beer boutique, its owner, Isabelle Pommier, was preparing for a 15 to 20 percent jump in cheese and butter prices in 2022.

“Our suppliers have already warned us that an important price increase is coming,” Ms. Pommier said, delicately arranging Vacherin, Camembert and Comté cheeses in a refrigerated case. Higher feed and fuel prices have exacerbated a decline in French milk production, squeezing dairy producers and raising costs for cheese makers, she said.

Ms. Pommier’s business hasn’t been hit yet. Many customers saved money during Covid lockdowns and could afford to splurge on artisanal cheese. But she worried that there could be a “snowball effect” next year if higher supplier bills oblige her to raise prices.

Once that happens, it’s hard to turn back. “In the 20 years that I’ve been working here, I never saw prices retreat,” she said. “They go one way — up.”

Marché Beauvau, a covered market at the heart of the Marché d’Aligre, has high-quality fishmongers and other vendors.Credit…Andrea Mantovani for The New York Times

French bread isn’t being spared, either. At Farine + O, an artisanal boulangerie, and at bakeries around France, the price of a traditional baguette is projected to rise up to 10 cents in the new year from the current range of €1 to €1.20, said Charlotte Noel and Adriana Ostojic, employees who busily sold the bakery’s award-winning breads and pastries to a phalanx of customers.

Bread prices play an important role in French history. After shortages of loaves helped kindle the French Revolution, the government fixed prices to ensure that bread remained affordable for everyone. Those regulations ended in 1986, but boulangeries will try to pass rising costs to products like brioche before touching the sacred baguette.

That has become harder amid soaring wheat prices and higher electricity bills for the bakers’ ovens. When the cost of a baguette rises, Ms. Noel said, “there’s no question that it impacts people.”

At Les Frangines d’Aligre fish shop, chaos from Britain’s exit from the European Union had also pushed prices up. A fishing trade war between France and Britain has raised the price of pollock and other fish from disputed waters 40 percent, said Christine Divenzo, the owner. “Everything is more expensive,” she said.

“That’s happening worldwide,” added Hassan, the shop’s fishmonger, declining to give his last name. “The result is that the rich are becoming very rich, and the poor are getting poorer,” he said. “Just look at the soup kitchens around Paris, where lines are longer than they have ever been.”

Emile Nataf’s table, scattered with mismatched glasses, dinner plates and other trinkets. “People are trying to bargain down prices, even though everything is just one euro,” he said.Credit…Andrea Mantovani for The New York Times

At the Marche d’Aligre’s flea market, where buyers rummage for cheap vintage clothing and curios, Emile Nataf surveyed a swarm of shoppers at his one-euro table, scattered with mismatched glasses, dinner plates and other trinkets that he collects by cleaning out people’s storage rooms.

Recently, he has noticed a change in consumers with modest means. “People are trying to bargain down prices, even though everything is just one euro,” he said. “That hasn’t happened before.”

He gazed at an older woman and a young couple picking through the bric-a-brac.

“People simply have less money to get by,” he said. “Something’s got to give.”

After 15 Months in U.S. Prisons, She Now Sits in Russia’s Parliament

Putin’s Next Move on Ukraine Is a Mystery. Just the Way He Likes It.

Sydney roars back to life as pubs and stores open after three months.