And so we leave the flawed and conflicted hero of our story, in ADX Montrose, a.k.a. “The Alcatraz of the Rockies,” the maximum security prison where he will serve an 86-year sentence for a wide assortment of felonies. There he will bake bread and, one imagines, dispense endless amounts of free legal advice for the rest of his days.

If this ending surprised you, take comfort in this fact: It surprised Saul Goodman, too. Or rather, it was the result of a decision that managed somehow to seem both determined and out of the blue. For a few minutes of this series finale, after negotiations with prosecutors that included a master class in legal posturing, Saul Goodman appeared headed toward a mere seven-and-a-half-year stint at a (relatively) comfortable federal penitentiary with, we are told, a golf program.

It was a sweetheart deal based on a version of his working relationship with Walter White that was utterly fanciful, one in which he was a victim of the deceased meth king, not his most important enabler. Though patently far-fetched, Saul needs to sell it to just one juror, as he tells the lead federal prosecutor, George Castellano (Bob Jesser). And after giving government lawyers a look at how effectively he can feign victimhood, the government signs on. It appears as though what we have is the tale of a man who, in the end, is untroubled by his conscience, or at least able to quiet that conscience long enough to wangle the bare minimum of punishment for his many sins.

But that is not the end of the story. When Saul hears that his ex-wife, Kim Wexler, has confessed to the authorities about her role in the death of Howard Hamlin and faces a potentially ruinous lawsuit from Howard’s widow, he changes his mind. In the ultimate reverse Perry Mason moment, Saul confesses to everything in open court, defying both an incredulous judge and his stupefied co-counsel, dooming himself to life behind bars.

The volte-face leaves our protagonist with a very different legacy. “Better Call Saul” has long been a character study, and the character was forever toggling between shades of good and bad. As Jimmy McGill, he had a peerless gift for con artistry and a conscience. His morals were forever at war with his principal talent — swindling people, for money or fun and sometimes both.

Then he became Saul Goodman, and the conscientious side of Jimmy disappeared. He became a very entertaining scoundrel.

The finale and the last few episodes were designed to keep viewers wondering which of these two — Jimmy or Saul — would have the upper hand. Saul seemed likely to win, in part because the rapacious side of Jimmy and Saul kept getting highlighted. Especially in this episode.

In different scenes, three characters from earlier parts of this show and “Breaking Bad” turn up to take a final bow and to help Jimmy riff on the theme of regret and second chances. To Mike, in dialogue set during their near-death march through the desert in Season 5, Jimmy says that given a time machine, he would teleport back to 1965 so he could invest early in Warren Buffett’s epochal moneymaking run at Berkshire Hathaway.

Jimmy looks ready to admit to something more meaningful but lets the moment pass.

When he has a time-machine talk with Walter White, as the two share an underground apartment and await new identities, he says he would like the chance to avoid a knee injury he sustained during a “slip-n-fall” scam when he was young.

“So you were always like this,” Walter says with disgust.

And when Chuck, his older brother, says, “If you don’t like where you’re headed, there’s no shame in going back and changing your path,” Jimmy seems unmoved.

“When have you ever changed your path?” he retorts.

None of this makes him sound like a guy ready for a moral reckoning. And, of course, the dark version of Jimmy-Saul seemed ascendant in recent episodes. In Omaha, we watched his on-the-lam persona, Gene Takavic, devolve into what might have been the most contemptible version of his character we have ever seen. In the penultimate episode Gene/Saul seemed ready to strangle Carol Burnett (OK, she’s Marion in the show, but she’s still Carol Burnett) with a phone cord.

So why does Jimmy trump Saul in the end? Why does he opt for a lifetime of punishment? Part of the answer is love. Love for Kim, specifically. His fake offer to the feds to provide dirt on his ex is, we learn, a ruse to make sure she is in the courtroom to watch him redeem himself.

There’s some symmetry here. He becomes the toxic version of Saul because of Kim. He returns to the morally fastidious version of Jimmy for the same reason. In the next to last scene, the two are sharing a cigarette, just as they did at the beginning of their legal careers.

Of course, love can’t fully explain the decision to choose 86 years of prison. Jimmy has opted for light over darkness, and that means giving himself the sentence he thinks he deserves. Sound improbable? Keep in mind that Jimmy/Gene has often lurched between good and bad, at moments and in ways that feel unpredictable. Which might be his defining quality and the only reason that the writers could pull the final switcheroo in this episode. It’s a narrative cliché that character is destiny, and Jimmy/Saul’s true character was a coin toss until the end. And thus, so too was his destiny.

As for Kim, she is going to manage. She seems ready to leave her sprinkler company job to work again as a public defender. True love, however, might not be in the cards. She was never more amorous than when she and Jimmy were fleecing a mark. But if she finds another con man, she might avoid him the way alcoholics avoid booze.

There is much to hash over in this episode but space for only one last question: What is the final verdict on “Better Call Saul”?

Here’s Your Faithful Recapper’s take: it was occasionally a great show that was more often a pretty good show and too often a dull show. It got bogged down in story lines — everything involving Chuck, most notably — that were happily forgotten. It had trouble modulating its tone. There were goofy elements to the scheme to frame Howard, for instance, which felt out of place even before the guy was murdered. There were a few too many elaborate cons. And the writers seemed to relish their willingness to let Jimmy McGill’s biography unfold at its own sometimes glacial pace, ignoring the pace viewers might have preferred.

The show was always an odd contraption. It had spare parts bolted on from “Breaking Bad,” and it told the story of cartel life before Walter White in segments that were often the most gripping in an episode. (Big round of applause for Hector, Gus, Nacho and Lalo.) It created two completely different planets and allowed them to cross orbits very rarely, albeit to thrilling effect. (Consider the restaurant meeting between Mike and Kim.) The writers gave themselves a nearly impossible task: to tell a story about love and ethics that kept being interrupted by a bunch of cunning and heavily armed sociopaths.

In the end, what shines brightest to Your Faithful Recapper is the psychological richness of the show’s characters. One could argue over their motivations as if they were real people; their actions were often ambiguous enough for viewers to debate.

Also, the show was always beautifully directed and shot. (Remember those ants swarming over sidewalk ice cream in Episode 3 of Season 5?) Attention to detail yielded all manner of Easter egg for vigilant viewers. (The same banal, hotel room painting appears in both “Breaking Bad” and “Better Call Saul.”In this episode, Jimmy/Saul flies on Wayfarer, the same airline that suffers a mid-air collision in “Breaking Bad.”) And there was a lot of exceptional dialogue, ranging from poignant to hilarious. You often watched and thought, “Nobody on television writes this well.”

Or showcases such superb acting. Jonathan Banks’s performance in Episode 6 of Season 1, which tells the back story of Mike Ehrmantraut, is just one of many standout performances. Then there’s Rhea Seehorn’s Sphinx-like style since she first appeared, which provided a wallop to her tearful catharsis in last week’s episode. Oh, and a hat tip to Betsy Brandt, who turns up in the finale and gives what is arguably Marie Schrader’s finest soliloquy.

That’s all from Your Faithful Recapper, who will sign off with that pretend-gun double draw farewell and take a shot of tequila, the show’s tipple of choice, in tribute. Now it’s your turn. In the comments section, opine on this episode and the entire series. Also, nominate a character, or set of characters, who should get the next spin off so we can do this all over again. 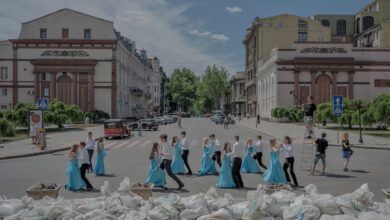 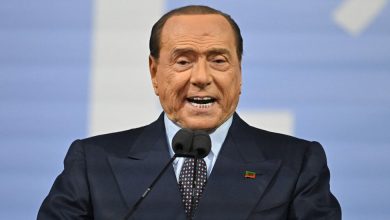 Berlusconi draws a backlash for appearing to defend Putin’s invasion of Ukraine. 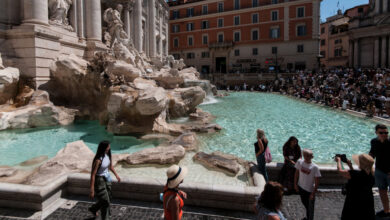 Stockholm Instead of Rome? October Instead of July? How Heat Waves Are Changing Tourism in Europe

As Floods Ravage China, 13 Die After Bus Falls Off Bridge