Given all the indignities and horrors that Marilyn Monroe endured during her 36 years — her family tragedies, paternal absence, maternal abuse, time in an orphanage, time in foster homes, spells of poverty, unworthy film roles, insults about her intelligence, struggles with mental illness, problems with substance abuse, sexual assault, the slavering attention of insatiable fans — it is a relief that she didn’t have to suffer through the vulgarities of “Blonde,” the latest necrophiliac entertainment to exploit her.

Hollywood has always eaten its own, including its dead. Given that the industry has also always loved making movies about its own machinery, it’s no surprise that it also likes making movies about its victims and martyrs. Three years ago in the biopic “Judy,” Renée Zellweger played Judy Garland near the end of her troubled life. “Blonde” goes for a more comprehensive biopic sweep — it runs nearly three hours — embracing a bleakly familiar trajectory that begins with Monroe’s unhappy childhood, revisits her dazzling yet progressively fraught fame, her depressingly abusive relationships, myriad health issues and catastrophic downward spiral.

After a brief prelude that introduces Marilyn at the height of her fame, the movie rewinds to the sad, lonely little girl named Norma Jeane, with a terrifying, mentally unstable single mother, Gladys (Julianne Nicholson). Childhood is a horror show — Gladys is cold, violent — but Norma Jeane crawls into adulthood (a fine if overwhelmed Ana de Armas). She models for cheesecake magazines, and before long breaks into the film industry, which is another nightmare. Soon after she steps onto a lot, she is raped by a man, here called Mr. Z and seemingly based on Darryl F. Zanuck, the longtime head of 20th Century Fox studio, where Monroe became a star.

“Blonde” is based on the 2000 Joyce Carol Oates hefty (the original hardback is 738 pages) fictionalized account of Monroe’s life. In the novel, Oates draws from the historical record but likewise plays with facts. She cooks up a ménage a trois for Monroe and channels her ostensible thoughts, including during a lurid tryst with an unkind President John F. Kennedy. In the introduction to the book, the critic Elaine Showalter writes that Oates used Monroe as “an emblem of twentieth-century America.” A woman, Showalter later adds without much conviction, “who was much more than a victim.”

The writer-director of “Blonde,” Andrew Dominik, doesn’t seem to have read that part about Monroe. His Norma Jeane — and her glamorous, vexed creation, Marilyn Monroe — is almost nothing more than a victim: As the years passed and even as her fame grows, she is mistreated again and again, even by those who claim to love her. Prey for leering men and a curiosity for smirking women (unlike Monroe, this Marilyn has no women friends), she is aware of her effect on others but also helpless to do, well, anything. With her tremulous smile, she drifts and stumbles through a life that never feels like her own.

All that’s missing from this portrait is, well, everything else, including Monroe’s personality and inner life, her intelligence, her wit and savvy and tenacity; her interest in — and knowledge of — politics; the work that she put in as an actress and the true depth of her professional ambitions. (As Anthony Summers points out in his book “Goddess: The Secret Lives of Marilyn Monroe,” she formed her own corporation: Marilyn Monroe Productions, Inc.) Mostly, what’s missing is any sense of what made Monroe more than just another beautiful woman in Hollywood: her genius. Watching “Blonde,” I wondered if Dominik had ever actually watched a Marilyn Monroe film, had seen the transcendent talent, the brilliant comic timing, the phrasing, gestures and grace?

Fictionalized histories play with the truth, hence the hedges that filmmakers stick on movies, that they’re “inspired by” or “based on” the truth. “Blonde” doesn’t announce itself as fiction right off, though it carries the usual mealy-mouthed disclaimer in the credits. But of course this is all about Monroe, one of the most famous women of the 20th century, and it revisits her fame and life — Bobby Cannavale plays a character based on Joe DiMaggio, and Adrien Brody on Arthur Miller — with enough fidelity to suggest that Dominik is working in good faith when he’s simply exploiting her anew.

With Adrien Brody playing a character based on the playwright Arthur Miller, her third husband. Scenes switch between black-and-white and color (as her films did).Credit…Netflix

That the first image of Marilyn in “Blonde” is of her ass makes that clear. The movie opens with a short black-and-white sequence that re-creates the night Monroe filmed the most famous scene in Billy Wilder’s garish 1955 comedy, “The Seven Year Itch,” about a married man lusting after a neighbor played by Monroe. During the film, her character stands on a subway grating and coos as a gust of air twice whooshes up her pleated white dress, exposing her thighs. “The Seven Year Itch” only bares her legs, although apparently the massive crowd that watched the scene while it was being shot saw more.

As camera flash bulbs pop, flooding the screen white, Dominik shows some fleeting images of the crowd and then cuts to Marilyn as her dress billows. Her back is to the camera — the framing of the shot lops off most of her head and legs — and she’s leaning a bit forward, so that her butt is thrust toward the viewer, as if in invitation. Dominik does get around to showing her face, which is beaming as the camera points up toward Marilyn in outward supplication. The high-contrast of the images makes the color black seem bottomless (metaphor alert!) while the white is so bright that it threatens to blot her out.

For the rest of “Blonde,” Dominik keeps peeping up Marilyn’s dress, metaphorically and not, while he tries to make his filmmaking fit his subject: He uses different aspect ratios and switches between color and black-and-white (she made films in both); reproduces some of the most indelible photos of her; and now and again employs some digital wizardry, as when a bed she’s sharing with two lovers during a vigorous romp turns into a waterfall, which happens around the time Marilyn makes “Niagara.” In other words, again and again, Dominik blurs the line between her films and her life.

But by so insistently erasing the divide between these realms, Dominik ends up reducing Marilyn to the very image — the goddess, the sexpot, the pinup, the commodity — that he also seems to be trying to critique. There’s no there there to his Marilyn, just tears and trauma and sex, lots and lots of sex. It’s a baffling take, though particularly when he takes us inside Marilyn’s vagina — twice (!), once in color and once in black-and-white — while she’s having abortions. I’m still not sure if this is meant to represent the point of view of her cervix or fetuses, who also make appearances. It certainly isn’t Marilyn’s.

Dominik is so far up Marilyn Monroe’s vagina in “Blonde” that he can’t see the rest of her. It’s easy to dismiss the movie as arty trash; undoubtedly it’s a missed opportunity. Monroe’s life was tough, but there was more to it than Dominik grasps, the proof of which is in the films she left behind — “Gentlemen Prefer Blondes,” “How to Marry a Millionaire,” “Some Like It Hot,” “The Misfits” — the whole damn filmography. To judge from “Blonde,” her performances were shaped by her agonies and somehow happened by chance, by fate, or because she’s a mystical, magical sex bomb. That’s grotesque, and it’s wrong. But if Dominik isn’t interested in or capable of understanding that Monroe was indeed more than a victim of the predations of men, it’s because, in this movie, he himself slipped into that wretched role. 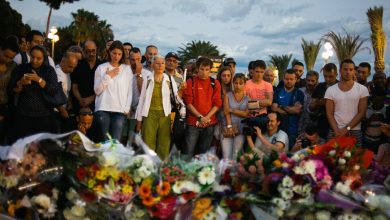 N.C.A.A. Men’s Tournament: What to Watch as the Round of 64 Begins 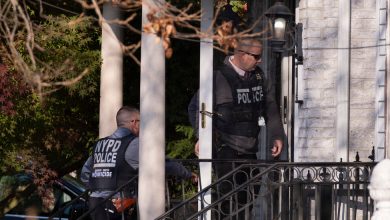 Man Arrested in Fatal Stabbing of 3 Women in Queens Home