A prominent order of Catholic priests vowed last year to raise $100 million to atone for its participation in the American slave trade. At the time, church leaders and historians said it would be the largest effort by the Roman Catholic Church to make amends for the buying, selling and enslavement of Black people in the United States.

But 16 months later, cash is only trickling in.

The Jesuit priest leading the fund-raising efforts said he had hoped that his order would have secured several multimillion-dollar donations by now, in addition to an initial $15 million investment made by the order. Instead, only about $180,000 in small donations has flowed into the trust the Jesuits created in partnership with a group of descendants whose ancestors were enslaved by the Catholic priests.

Alarmed by the slow pace of fund-raising, the leader of the group of descendants that has partnered with the Jesuits wrote to Rome earlier this month, urging the order’s worldwide leader to ensure that the American priests make good on their promise.

The American Jesuits, who relied on slave labor and slave sales for more than a century, had discussed plans last year to sell all of their remaining former plantation lands in Maryland, the priests said. They discussed transferring the proceeds, along with a portion of the proceeds of an earlier $57 million plantation sale, to the trust. Money from the trust will flow into a foundation that will finance programs that benefit descendants, including scholarships and money for emergency needs, and promote racial reconciliation projects.

But the remaining land has yet to be sold and the proceeds from prior land sales have yet to be transferred to the trust, Jesuit officials and descendants say.

“It is becoming obvious to all who look beyond words that Jesuits are not delivering in deed,” Joseph M. Stewart, president and chair of the Descendants Truth and Reconciliation Foundation, wrote in his letter to the Rev. Arturo Sosa, the Jesuit superior general. “The bottom line is that without your engagement, this partnership seems destined to fail.”

In his letter, Mr. Stewart warned that “hard-liners” within the order maintained the position that they “never enslaved anyone and thus do not ‘owe’ anyone anything.”

In an interview, Mr. Stewart said he believed that the Jesuit leadership remained committed to the partnership, describing ongoing meetings and conversations. The point, he said, was that the descendant community needed the priests to do more than talk.

In his letter, he called on Father Sosa to ensure that the American Jesuits complete the land sales and transfer of proceeds by the end of this year, and secure the $100 million pledge by next year. He also asked the order to deposit a total of $1 billion into the trust by 2029.

The descendants have previously called on the Jesuits to raise $1 billion for their foundation. The Jesuits have said they support that as a long-term goal, but have not committed to a timeline.

A spokesman for Father Sosa did not immediately respond to a request for comment.

“We’re challenging them to be more expeditious,” said Mr. Stewart, a retired corporate executive whose ancestors were sold by the Jesuits in 1838 to save Georgetown University from financial ruin, Jesuit archival records show. “How long does it take to do this if you’re committed to it?”

“I had hoped to be further along,” said the Rev. Timothy P. Kesicki, who helped to broker that initial agreement between the Jesuits and the group of descendants.Credit…Michael A. McCoy for The New York Times

In a statement released on Monday, the Rev. Brian G. Paulson, president of the Jesuit Conference of Canada and the United States, along with the nation’s senior Jesuit leaders said they remained “deeply devoted to our historic partnership with the descendant community and to working together for racial reconciliation and healing in this country.”

Father Paulson and the provincial leaders said they “share in the concern of Mr. Joseph Stewart and other descendant leaders regarding the pace of our fund-raising efforts,” adding that they were “continuing to work with our network partners to secure resources.”

The Jesuits negotiating with the descendants’ group over the former plantation lands said that they had hired two outside firms to facilitate the sale of the remaining land, and that they were “in discussions” about the $57 million land sale and how a portion of those proceeds might benefit the descendants’ trust.

The Jesuits announced their $100 million pledge in March 2021 as part of their efforts to make amends for their history of profiting from slavery. The order relied on the plantations and slave labor to sustain the clergy and to help finance the construction and the day-to-day operations of churches and schools, including Georgetown, the nation’s first Catholic institution of higher learning.

At the time of the announcement, they said that they had already deposited $15 million in the descendants’ trust. They had also hired a fund-raising firm with a goal of raising the rest of the $100 million over a period of three to five years. The partnership emerged after a group of descendants pressed for negotiations after learning from articles in The New York Times that the Jesuits had sold their ancestors to save Georgetown.

The Rev. Timothy P. Kesicki, the former president of the Jesuit conference, who helped to broker that initial agreement between the Jesuits and the group of descendants, said in an interview that he understood their frustrations.

“I had hoped to be further along,” said Father Kesicki, who said he had hoped that the Jesuits would have secured about a third of the $100 million pledge by now for the trust, including the order’s initial investment of $15 million.

Father Kesicki, who now serves as chair of the trust, and others familiar with the Jesuits’ efforts pointed to a number of challenges, including the organizational structure of the order, which requires multiple signoffs from multiple people on significant decisions, and the complexity involved in the land deals.

“But we need to show more growth,” he said, “and that’s a challenge and a pressure that I carry every day.”

A Crusade to Challenge the 2020 Election, Blessed by Church Leaders

In Coaching, It’s Sometimes About Who You Know and Where You’ve Been 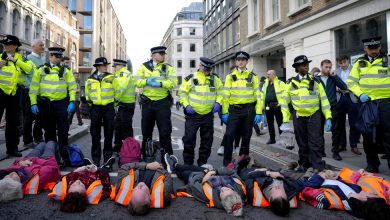 As Climate Protests Get Bolder, British Police Strike Back With New Powers