Throughout the pandemic, Canadians have been able to travel to the United States for nonessential reasons like visiting family and friends, but there was a catch: They had to fly.

That’s because the United States would let Canadian citizens cross the land border only for a limited number of business-related reasons, like having a health care job on the American side. Now the land border has reopened for all fully vaccinated travelers, but Canadians still face a catch that may deter quick trips, and this time it’s one introduced by their own government.

Canada, which reopened its border to travelers from the United States in August, requires that anyone entering the country present a negative Covid test taken within 72 hours, and it will not accept relatively low-cost rapid tests. Instead, the result must come from a more reliable polymerase chain reaction, or PCR, test, which can cost well over $100 and take one to two days.

Canadians crossing for just a few hours can take the test in Canada before they leave. But some groups and politicians on both sides of the border have said recently that the cost and inconvenience associated with PCR testing will be a powerful deterrent to travel.

Air travelers have already raised concerns about the cost. Angus Reid, the chairman of a nonprofit polling group that bears his name, said his son, daughter-in-law and two children had paid $1,200 for tests to return from Palm Springs, Calif.

“Plus finding test centers in US is increasingly difficult,” he wrote on Twitter over the weekend. “This needs to change. Now!”

Doug Hornsby, the owner of Border Mailbox and Parcel, said only one Canadian customer had picked up packages that morning. The man, from Alberta, had 17 packages waiting for him, the oldest of which had been there since March 2020.

Because of the testing requirement, Mr. Hornsby said he didn’t expect many more customers.

Skye Hill, the owner of a Chevron in Blaine, said her store had just finished $1 million in renovations before the border closed. Since then, revenue has plummeted 90 percent.

“Everyone’s so excited. You know, ‘The border’s finally opened after two years,’” she said. “But really, our business depends on those day trips.”

“We aren’t going to see those people, I don’t think, until they lift that Covid test,” she added.

Closing the land border to most people had a drastic effect. In August 2019, slightly more than three million private vehicles entered the United States from Canada at land crossings. This August, there were only 449,004 such crossings. 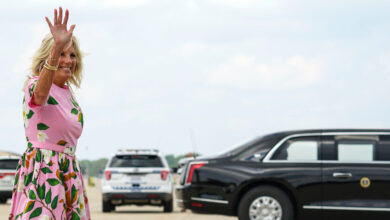 Iraqi migrants say they face beatings on both sides of Belarusian border.

Is Gruyère Still Gruyère if It Doesn’t Come From Gruyères?