BEIRUT, Lebanon — Armed clashes between sectarian militias transformed Beirut neighborhoods into a deadly war zone on Thursday, raising fears that violence could fill the void left by the near-collapse of the Lebanese state.

Rival gunmen, chanting in support of their leaders, hid behind cars and dumpsters to fire automatic weapons and rocket-propelled grenades at their rivals. At least six people were killed and 30 wounded. Residents cowered in their homes, and teachers herded children into the hallways and basements of schools to protect them from the shooting.

It was some of the worst violence in years to convulse Beirut, aggravating the sense of instability in a small country already buffeted by devastating political and economic crises and inviting recollections of its civil war that ended more than three decades ago.

Since the fall of 2019, Lebanon’s currency has plummeted more than 90 percent in value, battering the economy and reducing Lebanese who were comfortably middle class to poverty. The World Bank has said Lebanon’s economic collapse could rank among the three worst in the world since the mid-1800s.

Grave fuel shortages in recent months have left all but the wealthiest Lebanese struggling with prolonged power blackouts and long lines at gas stations. The country’s once vaunted banking, medical and education sectors have all suffered profound losses, as professionals have fled to seek livelihoods abroad. 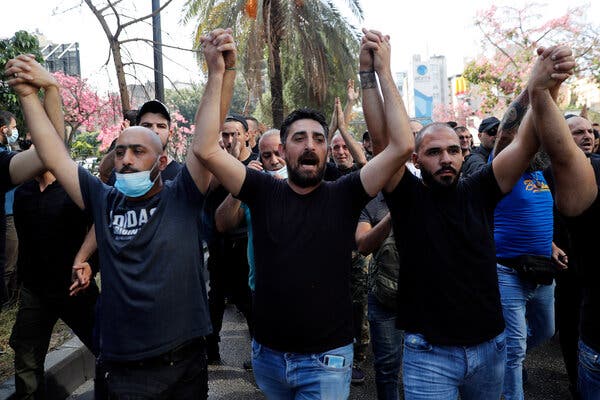 Supporters of the Shiite Hezbollah and Amal groups chanting slogans against Judge Tarek Bitar, who is investigating last year’s deadly seaport blast, during a protest in Beirut on Thursday.Credit…Hussein Malla/Associated Press

As the country has plunged into ever deeper dysfunction, its political elite has resorted to increasingly bitter infighting. A huge explosion in the port of Beirut last year killed more than 200 people and exposed the results of what many Lebanese see as decades of poor governance and corruption. The Covid-19 pandemic has only aggravated the economic distress and sense of despair.

The fighting on Thursday was part of the continuing fallout from the port explosion.

Two Shiite Muslim parties — Hezbollah, an Iran-backed militant group, and the Amal Movement — had organized a protest calling for the removal of the judge charged with investigating the blast and determining who was responsible.

As the protesters gathered, gunshots rang out, apparently fired by snipers in nearby high buildings, according to witnesses and Lebanese officials, and protesters scattered to side streets, where they retrieved weapons and rejoined the fray.

It was unclear late Thursday who fired the first shots.

The clashes raged in an area straddling two neighborhoods, one Shiite and the other a stronghold of the Lebanese Forces, a Christian political party that staunchly opposes Hezbollah.

After about four hours of fighting, the Lebanese army was deployed to calm the streets and the clashes appeared to subside, but residents remained in their homes, terrified at the possibility of further violence. For many Beirut residents, the gunfire echoing in the streets recalled the worst days of the civil war, which ravaged the once-elegant city for 15 years.

An army soldier helps a schoolgirl get to her parents.Credit…Mohamed Azakir/Reuters

“We stayed in the bathroom for hours, the safest part in the house,” said Leena Haddad, who lives nearby and kept her daughter from taking photos from the window for fears that she would get shot.

“I lived the civil war in the past,” Ms. Haddad said. “I know what civil war means.”

Hezbollah officials accused the Lebanese Forces of having started the shooting, and in a statement, Hezbollah and the Amal Movement accused unnamed forces of trying to “drag the country into a deliberate strife.”

The head of the Lebanese Forces, Samir Geagea, condemned the violence in posts on Twitter, saying that the clashes had been caused by “uncontrolled and widespread weapons that threaten citizens in every time and place,” a reference to Hezbollah’s vast arsenal.

His group accused Hezbollah of exploiting sectarian tensions to derail the port investigation over fears it could be implicated.

“Hezbollah must be taught a lesson now that it cannot desecrate the entire country, its institutions, people and dignity, in order to prevent anyone from expressing their opinion or carrying out their duties,” Antoine Zahra, a member of the Lebanese Forces’ executive board, said in a statement.

Shiite fighters from Hezbollah and Amal aim a Kalashnikov assault rifle and a rocket-propelled grenade launcher amid clashes in the Tayouneh neighborhood of Beirut.Credit…Afp Contributor#Afp/Agence France-Presse — Getty Images

The Lebanese Army said that it had arrested nine people from both sides, including a Syrian.

As night fell, the country’s president, Michel Aoun, gave a televised address calling for calm, condemning gunmen who fired at protesters and promising they would be brought to justice. “Our country needs calm dialogue, and calm solutions and the respect for our institutions,” he said.

Mr. Aoun also said the investigation into the blast at the port would continue, putting him at odds with protest leaders.

Violence between religious groups is particularly dangerous in Lebanon, which has 18 recognized sects, including Sunni and Shiite Muslims, various denominations of Christians and others. Conflicts between them and the militias they maintain define the country’s politics and have often spilled over into violence, most catastrophically during the civil war, which ended in 1990.

The Sunnis, Shiites and Christians are Lebanon’s largest groups, but Hezbollah, which the United States and neighboring Israel regard as a terrorist organization, has emerged as the country’s most powerful political and military force. Supported by Iran, Hezbollah wields an arsenal of more than 100,000 rockets pointed at Israel and thousands of fighters who have been dispatched to battlefields in Yemen, Syria and Iraq.

The fighting on Thursday erupted just a month after Najib Mikati, a billionaire telecommunications mogul, became the prime minister, taking the reins for a third time in a country that had lacked a fully empowered government for more than a year.

Under Secretary of State Victoria Nuland meeting with Prime Minister Najib Mikati of Lebanon in Beirut on Thursday.Credit…Wael Hamzeh/EPA, via Shutterstock

Calling for a day of mourning on Friday, Mr. Mikati ordered all government buildings and schools closed for the day.

Mr. Mikati replaced the former prime minister, Hassan Diab, who, along with his cabinet, resigned after the port explosion.

There had been hope that Mr. Mikati would bring some stability as his new government took shape. But at the same time, tensions over the port investigation grew deeper.

The blast at the port was caused by the sudden combustion of some 2,750 tons of volatile chemicals that had been unloaded into the port years before, but more than a year later no one has been held accountable.

The judge investigating the explosion, Tarek Bitar, has moved to summon a range of powerful politicians and security officials for questioning, which could result in criminal charges against them.

Hezbollah has grown increasingly vocal in its criticism of Judge Bitar, and his inquiry was suspended this week after two former ministers facing charges lodged a legal complaint against him.

Families of the victims condemned the move, with critics saying that the country’s political leadership was trying to shield itself from accountability for the largest explosion in the turbulent country’s history.

On Monday, the judge had issued an arrest warrant for Ali Hussein Khalil, a prominent Shiite member of Parliament and a close adviser to the leader of the Amal party. The warrant leveled serious accusations against Mr. Khalil.

“The nature of the offense,” the document read, is “killing, harming, arson and vandalism linked to probable intent.”

On Tuesday, the Hezbollah leader Hassan Nasrallah issued some of his most scathing criticism of the Judge Bitar, accusing him of “politically targeting” officials in his investigation and calling for a protest on Thursday.

When Hezbollah followers joined the protests to call for the judge’s removal, witnesses said, the sniper shots rang out.

A fallen Shiite fighter amid clashes in the Tayouneh neighborhood of Beirut on Thursday.Credit…Agence France-Presse — Getty Images

Tags
Country Had Protest Sai̇d Who

In India, fears grow that gatherings for Diwali could prompt another virus spike.