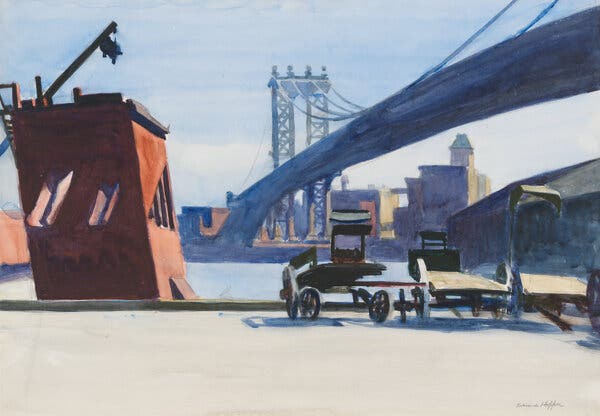 Today the Whitney Museum of American Art is activating a singularly New York-centric map for some of the paintings in its exhibition “Edward Hopper’s New York.”

The web-based digital map not only shows the city as Hopper saw it in his paintings; it shows the places in the paintings as they are now. The map pairs the paintings with photographs taken from where Hopper would have stood.

Kim Conaty, the curator of “Edward Hopper’s New York,” said the idea behind the map was to prompt museum visitors to experience Hopper beyond the Whitney’s galleries. The map “doesn’t script your path to the city,” she said, “but it points to these locations of interest.”

It also applies a degree of literalness to a painter who wasn’t always literal. Our critic Karen Rosenberg wrote that Hopper turned the city into “his own personal fantasy metropolis.” She said that “he dispenses almost entirely with street life and traffic, ignores skyscrapers and the Brooklyn Bridge and inserts imaginary buildings where it suits him.” He ignored the Brooklyn Bridge completely: He never painted it.

But the map points to Hopper’s “Queensborough Bridge,” 3,724 feet of stone and steel and fanciful finials that had been open for four years when he painted it in 1913. The map also shows the bridge now, in a photograph taken from about where Hopper would have stood as he surveyed its Erector Set pattern, a look the architectural historian Barry Lewis once described as a “heavy industrial aesthetic.” What is different is the landscape — the tall new buildings on what is now called Roosevelt Island and in Long Island City.

Downriver, the Manhattan Bridge looks about the same as Hopper presented it. It’s the foreground that’s different: The building at the water’s edge appears to be ready to collapse. The carts appear to have been abandoned even as Hopper lavished attention on rendering them just so. In the “now” photo, a chain-link fence bisects the space between Hopper’s vantage point and the river.

Some of the places on the map are approximate, not exact — the pathways Hopper would have followed have been rerouted, and some of his subjects have disappeared, like the Sheridan Theater in Greenwich Village. He painted the interior of that movie palace in 1937.

“We had to settle for the park where the theater once stood,” said Angela Montefinise, a spokeswoman for the museum. Her team developed the map.

Where, exactly, is your New York?

There’s not only a map for Hopper’s New York, there’s a map for your New York, whether you live here or not. My colleagues at The Upshot have been thinking about how New Yorkers define the city’s neighborhoods. Maybe the Upshotters have had one too many debates about exactly what neighborhoods they live in.

But where does Bushwick start and end, anyway? Is Greenwood Heights actually a neighborhood? What do you call the area around Pennsylvania Station? How far south does the South Bronx go? And does anyone call it SoBro? What about SoHo or NoMad?

To answer such questions, The Upshot created a reader-sourced map that asks you to identify what you call your neighborhood and to draw its borders. We’ll let you know what your answers reveal.

Enjoy a sunny day with temps near the high 40s. At night, expect a chance of rain, with temps around the low 40s.

In effect until Thursday (Immaculate Conception).

Back from his first foreign trip as mayor

Mayor Eric Adams begins the week back in New York after his trip to Greece and Qatar.

My colleague Emma G. Fitzsimmons writes that the Qatar leg of the trip was something of a mystery. None of his events he took part in there were open to reporters, and his schedule did not give many details.

He told reporters in a telephone call from Doha, the capital of Qatar, on Saturday that he had enjoyed the United States soccer match against the Netherlands, even though the U.S. team was eliminated as a World Cup contender with the 3-1 loss.

His schedule had listed “visits and learns about Dohan Metro system” before the game. He said in the call with reporters that he had been impressed by the transit system and Doha’s express buses.

“Because of their usage of the new system that they’ve built here,” he said, “that allowed them to take vehicles off the road.”

A Qatar news outlet posted a photo on Twitter of Adams meeting with the emir of Qatar, Sheikh Tamim bin Hamad al-Thani, on Friday — an event not listed on the mayor’s public schedule. Adams described it as a spontaneous encounter. “He walked by and stopped to say hello and good luck for 2026 when we host the event,” Adams told reporters, adding that he would not discuss the details of their conversation.

Many of the comments on Adams’s social media posts questioned the need for the trip and urged him to return home and tend to the city’s problems. Adams faced criticism while he was away about his directive to involuntarily hospitalize New Yorkers with severe, untreated mental illnesses. Some left-leaning City Council members called the plan “misguided and dangerous,” and public defenders said that “forcibly removing people from the streets and confining them in hospitals against their will is policing and incarceration by another name.” (Adams said in a call from Greece on Thursday that the police officers would not force all homeless people into hospitals. He said officers would focus on helping those with the most urgent needs.)

In Athens, he attended a dinner hosted by President Katerina Sakellaropoulou. He later watched a demonstration of new street-cleaning machines in Athens before Mayor Kostas Bakoyannis led him on a tour of the Acropolis. The two mayors also attended a wreath-laying ceremony at a Holocaust memorial and an event to turn on the Greek capital’s Christmas lights.

The mayor’s office said the hosts of an antisemitism conference that the mayor attended paid for his plane fares to Athens and to Doha and for his hotel in Athens. He had said before he left that he would pay for his accommodations in Qatar himself.

Every week since 1976, Metropolitan Diary has published stories by, and for, New Yorkers. Now we’re asking for your help picking the best Diary entry of the year. The voting closes on Dec. 19 at midnight.

It was a Sunday morning in October, and I had gone for a long walk on the path along the West Side Highway with a friend I’d recently reconnected with.

Afterward, we grabbed a coffee in the West Village and sat on a bench on Washington Street to chat and enjoy the sunshine.

As we were talking, a man walked up with his dog. She stopped walking just before the bench we were on.

“This is her bench,” he told us, shrugging.

As he tried to tug her onward to the next bench nearby, she walked a few steps, looked us in the eye and lay down again.

He thanked us, and as we walked away, we saw Sadie stand, trot over and hop up onto the bench next to the man.

Glad we could get together here. See you tomorrow. — J.B.

P.S. Here’s today’s Mini Crossword and Spelling Bee. You can find all our puzzles here.

Melissa Guerrero, Morgan Malget and Ed Shanahan contributed to New York Today. You can reach the team at [email protected]

‘Such Bad Guys Will Come’: How One Russian Brigade Terrorized Bucha

Intrigue Deepens at U.N. Over Myanmar and Afghanistan