BISSAU, Guinea-Bissau — When her country needed arms to fight its bitter liberation war against its colonizer, it was the Soviet Union that provided them.

When her country needed medical workers to tend to the war’s wounded, it sent her to train as a nurse — in the Soviet Union.

So when Joana Gomes, now a lawmaker in the West African country of Guinea-Bissau, heard about the war between Russia and Ukraine, her allegiance was clear from the start: It would be with Russia, although she sometimes slips and still calls it the Soviet Union.

“It was with their arms that we won our independence,” Ms. Gomes, 72, said on a recent rainy afternoon, cooking lunch at home in the capital, Bissau. “If not for them, even today we would not have our independence.”

When Russia invaded Ukraine in February, some voices were absent from the global concert of condemnation, many of them African. Sixteen of the 35 countries that abstained from the United Nations vote to condemn Russia’s actions were in Africa, as was one of the five that voted no, Eritrea.

In 1964, when she stepped off a plane in the U.S.S.R., the first thing Ms. Gomes’s sponsors did was hand her gloves, a hat and a heavy coat.

Joana Gomes, right, and a colleague during their nurse training in Kyiv in 1968 in what was then the Soviet Union.Credit…Ricci Shryock for The New York Times

She was 14. Until that point, she had never left Guinea-Bissau, a small West African country that won independence from Portugal in 1974 after a decade-long war.

But her young life had already been filled with drama, violence and tragedy. Her father, an outspoken proponent of the liberation fight, was murdered by one of his comrades when Ms. Gomes was 13.

Heartbroken, she set out for the forested front lines of the war. She had decided that the only man who could help her obtain justice for her father was Amilcar Cabral, the leader of the liberation movement and one of Africa’s most iconic anticolonial philosophers and military leaders.

Her three-day march to meet Mr. Cabral in the hide-out used by him and his guerrilla fighters paid off. The accused assassin was arrested.

But the fight against the Portuguese was just beginning, and Ms. Gomes was thrust into one of the continent’s most brutal independence wars.

When Mr. Cabral, a founder of the African Party for the Independence of Guinea and Cape Verde, or P.A.I.G.C., sent hundreds of Guinean youth for training in the U.S.S.R., Ms. Gomes was among them. When she returned five years later, a skilled nurse fluent in Russian, the war had intensified.

She worked long days on the front lines at makeshift clinics, alongside her comrades and doctors from Cuba, binding soldiers’ wounds and saving the lives of civilians caught in the crossfire. On one occasion, she pulled shrapnel from the chest of a woman who was eight months pregnant, saving both mother and child.

One of her most unforgettable moments came on New Year’s Eve day, as 1972 was ending.

That morning she wore a pink dress instead of military fatigues, as she anticipated a small party to celebrate. She was in a village a few miles from her base camp, ordered to retrieve a fellow soldier recuperating from a chest infection.

But just as the morning’s coffee was beginning to boil on an open fire, Ms. Gomes heard enemy gunfire, and she ran for the cover of the forest. “Maybe this is the time I die,” she recalls thinking to herself. But just then, she tripped, and a small bazooka rocket zoomed above where her head had just been. She did not make it to the New Year’s party, but she did make it out of that ambush alive.

Stephanie J. Urdang, a journalist born in South Africa, spent two months reporting from the front lines of Guinea-Bissau’s liberation war and wrote “Fighting Two Colonialisms: The Women’s Struggle in Guinea-Bissau” about the contributions women like Ms. Gomes made in the fight for independence.

Assigned as nurses, teachers and transporters of food and weapons, the women were trusted to ensure that guerrilla fighters had places to live and food to eat, Ms. Urdang said. But their roles in garnering popular support in the countryside were perhaps even more important.

“People in the villages knew what the Portuguese were doing to them. They knew it through their inability to sell their crops at a just price, they knew it in the way they were taken for forced labor,” Ms. Urdang said.

“So when the P.A.I.G.C. came in and were going to get rid of these oppressors, and then when they saw schools being built, health centers being built and literacy campaigns for people, just a whole lot of services were provided that weren’t there before — there was serious mobilization,” Ms. Urdang said.

After the war was won, thanks in part to that mobilization, Ms. Gomes went back to the Soviet Union, where she trained as a doctor before returning to Guinea-Bissau in 1987 to work in local hospitals.

Ms. Gomes, center right, during her medical training in Kyiv. When she returned to Guinea-Bissau, she was a skilled nurse and fluent in Russian.

She became director of the national physical rehabilitation center and later worked as an inspector of health facilities for the Ministry of Health, a start to her government experience.

Then, a few years ago, she decided to once again deploy her medical knowledge on the front lines — of politics, this time, not war.

In 2019 in the country’s rural southwest, during her campaign for a seat in Parliament, Ms. Gomes oversaw an effort to deliver dozens of new beds to a small hospital. She wanted to show she was determined to do something about the dire health care system in Guinea-Bissau, whose citizens have an average life expectancy of 58.

Ms. Gomes won her election, but her efforts to improve a health care system that sits near the bottom in global rankings have run into endemic obstacles.

Since independence, Guinea-Bissau has struggled to find its footing amid both internal fighting and foreign pressures. There have been four coups and many more attempted.

In this country so dominated by water, mangroves swamps and islands, it can seem as if citizens are always waiting for the tide to change so they can get somewhere — the physical tide or the political one.

Ms. Gomes’s small concrete home in Bissau is in a constant state of destruction and reconstruction. So is her country, where citizens have to deal with unreliable hospitals, schools and infrastructure.

Ms. Gomes at her home in Bissau, the capital. As a lawmaker, she has focused on improving Guinea-Bissau’s health care system.Credit…Ricci Shryock for The New York Times

Then in May, the president, Umaro Sissoco Embaló, dissolved the National Assembly, deepening the country’s cycle of political instability.

With her parliamentary work trying to improve the country’s health care system now on hold, Ms. Gomes has had more time to reflect on the war between Russia and Ukraine.

Her nurse training was in Kyiv, then part of the Soviet Union, and she said she is sympathetic to both sides.

“I spent my youth in Ukraine, I have friends there, I do not want people to suffer. I wish there could be an understanding between Ukraine and Putin,” she said. “I was in a war, I know what war is, I know what it is to suffer in a war.”

But for all the daily struggles that are still part of life in Guinea-Bissau, one hard-fought achievement is still intact: independence.

And the Kremlin’s role in that is still gratefully remembered, and she disagrees with the many who consider the war an act of unjustified Russian aggression.

“Ukraine, why did they want to join NATO?” Ms. Gomes asked. “Russia does not accept that.”

NATO, she noted, “is an enemy of the Soviet Union. If someone is my enemy and I tell my father I am going to their house — to my enemy’s house — is that good?”

Weapons used during Guinea-Bissau’s liberation war, many of which were supplied by the Soviet Union, on display at a museum in the capital.Credit…Ricci Shryock for The New York Times

In her support of Russia, she is far from alone in Guinea-Bissau, or indeed the wider region, where a whole generation won liberation from colonial oppressors with Soviet aid.

Manuel dos Santos, a former freedom fighter in Guinea-Bissau who has served in various ministerial posts, was also clear about his support. “If I had to take sides in this moment — and I don’t have to — but let’s say I had to, I would say that Russia had been provoked in every way,” he said.

Not far from the National Assembly building in downtown Bissau, at the Guinea-Bissau National Liberation Museum, many Soviet-supplied weapons are displayed.

“I used to have a Kalashnikov. The Portuguese had American weapons,” Mr. Dos Santos said. “It’s as simple as that.”

Whichever side they’re on, people in Guinea-Bissau have felt the war’s effects firsthand.

Lines at gas stations were worst this spring, when fuel shortages meant drivers spent hours waiting to fill up. But just recently, prices for buses and taxis increased because of higher energy costs.

Despite her appreciation for the U.S.S.R., Ms. Gomes didn’t embrace its atheism. On a recent Sunday, she got ready to attend one of the three evangelical churches where she worships.

While there, she planned to pray for an end to Guinea-Bissau’s political crises.

She noted she had been fighting for her country since she was a teenager. But now, it felt like all she could do was wait for the tide to change.

“I feel pain, as a former liberation fighter. What did we fight for?” she asked. “Guinea-Bissau, it’s without a government, without anything right now.”

Lightning Win Third Straight and Push Rangers to the Brink 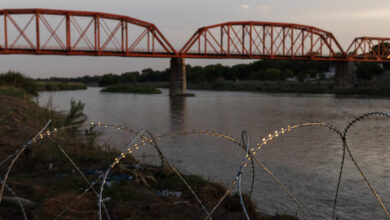 Eight Migrants Drown as Dozens Are Swept Down Rio Grande