KANDAHAR, Afghanistan — For years, opium has been the monster too big to slay. One Afghan government after another has pledged to stamp out opium production and trafficking, only to prove unable to resist billions of dollars in illicit profits.

The Taliban government of the 1990s ultimately managed to reduce opium cultivation. But after the U.S.-led invasion in 2001, opium taxes and smuggling helped fuel the Taliban’s own 20-year insurgency.

Now, with the Taliban back in power, the insurgents turned politicians are again struggling to eradicate opium cultivation and the rampant addiction problem that has come with it. The Taliban announced on April 3 that poppy cultivation had been outlawed, with violators to be punished under Shariah law.

But stamping out opium will be more difficult than ever because of a shift by poppy farmers to green energy. 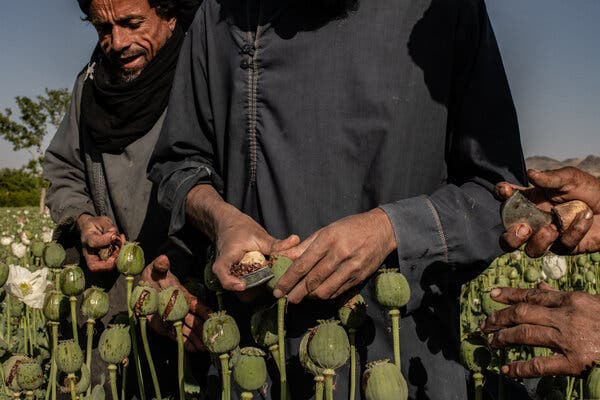 Farmers scraping opium from poppy bulbs during the spring harvest.

A shopkeeper working for a solar panel dealer waiting for customers in his downtown Kandahar storefront.
Solar panels have profoundly changed rural life in Afghanistan, bringing crucial irrigation for crops like these grape vines in the Zhare District of Kandahar.

The solar arrays have been central to ensuring Afghanistan’s status as the global leader in opium. Afghanistan produced 83 percent of the world’s opium from 2015 to 2020, according to the United Nations Office on Drugs and Crime. Even with a grinding war and persistent droughts, opium cultivation in Afghanistan rose to 224,000 hectares in 2020 from 123,000 hectares in 2009, the U.N. reported.

The previous American-backed government had spent $8.6 billion on poppy eradication, but top Afghan officials were deeply complicit in the opium trade, building garish “poppy palaces” in Kabul, the capital, and buying gaudy villas in Dubai, in the United Arab Emirates. A 2018 government inspector general’s report concluded that the campaign “had no lasting impact.”

The Taliban, for their part, have condemned opium as anti-Islamic, as Afghanistan’s poppy crop sustains addicts in Europe and the Middle East, as well as a huge number inside Afghanistan. But given their own deep ties to opium smuggling during the insurgency, Taliban leaders are walking a fine line between hypocrisy and holiness.

A widespread crackdown would exacerbate Afghanistan’s already devastating postwar economic collapse and antagonize the Taliban’s core constituency among Pashtun farmers, impoverishing families that rely on the crop to be able to afford food. Eradication would require not only seizing farmers’ solar panels, but also confronting Taliban commanders complicit in the trade — at a time when the movement is facing internal dissatisfaction as the money dries up.

The opium trade earned about $1.8 billion to $2.7 billion last year, the United Nations has estimated. Opium sales have provided 9 to 14 percent of Afghanistan’s gross domestic product, compared with 9 percent provided by legal exports of goods and services.

“The cultivation of opium and export of opiates is hugely important for the Afghan economy as a whole, and any implementation of the ban will have wide-ranging consequences,” the Afghanistan Analysts Network, an independent research group, wrote in a report last month.

A prison guard watched over a large group of men identified as heroin addicts by Taliban officials in April at Kandahar’s main prison. They were arrested and treated, officials said, and were due to be released soon.

Opium farmers now rely on at least 67,000 solar-power-fed water reservoirs across Afghanistan’s desert southwest, according to a European Union-funded research project by David Mansfield, a consultant who has studied illicit economies and rural livelihoods in Afghanistan for two decades.

“For many opium farmers, abundant water is now a given,” he said. “No one perceives it to have a cost.”

The Taliban have taken aim at some solar-powered pumps. On May 13, the governor of Helmand Province, adjacent to Kandahar Province in the opium belt, ordered the police to confiscate panels and pumps so that newly planted poppies would die in parched fields.

“Do not destroy the fields, but make the fields dry out,” Gov. Maulave Talib Akhund said in a statement. He added, “We are committed to fulfilling the opium decree.”

The opium ban comes amid catastrophic levels of hunger, poverty and drought. The United Nations estimates that 23 million Afghans are suffering acute food deprivation. An economy once propped up by Western aid has collapsed under sanctions and freezing of Afghan government funds abroad.

A bakery in downtown Kandahar. It has been harder for many Afghans to afford food amid a severe economic crisis.
At Mirwais Hospital in Kandahar, treating infant malnourishment.
Farmers pooled their resources to take 50-kilogram sacks of wheat flour from the World Food Program aid distribution center to their distant homes.

“It’s too bad for Afghans because poppy is the wealth of the Afghan people,” Shah Agha, 35, a poppy farmer from the Zari District of Kandahar, said of the ban.

After investing about $500 on seeds, fertilizer, labor and other expenses, Mr. Agha said, he hoped to gross about $5,000 after selling the 20 kilograms of opium he expected to harvest this spring.

The opium ban was met with a collective shrug this spring by southern farmers, many of whom were already harvesting their spring crops. Opium prices surged almost immediately, several farmers said, to roughly $180 per kilogram from $60 per kilogram.

“I think they banned it for their own benefit because most of the smugglers and Taliban commanders have tons of opium, and they might want to increase the prices,” Mr. Agha said.

The government has indicated that it will allow the spring harvest because it was already underway. But the Taliban have vowed to crack down on farmers who try to cultivate any new crops.

Men and boys spent an April afternoon on the banks of the Arghandab River, which had been dry only 24 hours earlier. Officials had opened a dam’s floodgates to allow badly needed water to the area, in the Panjwai District of Kandahar.

As the United States did during its long presence in Afghanistan, the Taliban have suggested shifting to alternative crops like wheat, pomegranates, cumin and almonds. But even if poppy growing were eliminated, alternative crops would still be at risk because desert aquifers are being rapidly depleted.

Dr. Mansfield said that determining how long the aquifers could continue to supply water was uncharted territory because no one had been able to conduct a rigorous scientific study of the desert groundwater.

Amir Jan Armani, 45, who said he hoped to gross about $4,000 from 45 kilograms of opium he harvested in Kandahar Province this spring, said he had watched water levels drop precipitously since solar panels arrived.

When farmers used diesel-powered pumps, groundwater levels dropped about three meters a year, Mr. Armani said. But since solar panels arrived, they have sometimes sunk up to nine meters annually. His well is 30 meters deep, he said, but his neighbor’s well across the river is 60 meters deep.

“We have to continue to dig our wells deeper and deeper,” Mr. Armani said.

He and other farmers have saved money this spring by not paying opium taxes imposed by the Taliban in previous years. No such taxes have been levied this year, said Noor Ahmad Saied, the Taliban’s director of information in Kandahar.

Many farmers in Arghandab, a district in Kandahar famous for its pomegranates, have chopped down pomegranate trees killed by drought or fighting. They planted poppies instead.

A farmer in Zhari District harvested wheat in early April in the shadow of an abandoned military post belonging to the deposed U.S.-backed government.
A farmer gestured to his ailing wheat fields in Shah Wali Kot.
Workers manned a well-drilling rig along Highway 1 in Kandahar Province, the main artery of trade and transport in southern Afghanistan, as solar panels sat nearby.

Even when prices are high, many poppy farmers say, they earn only about $2 a day for each family member. They are at the very bottom of a narcotic trafficking system in which profits increase exponentially from growers to middlemen to processing labs to major cross-border traffickers.

Ehsanullah Shakir, 31, an opium smuggler in Helmand Province, said Taliban enforcement of the ban this year had been uneven so far. Some farmers had planted almonds, cumin or basil after harvesting their spring poppies, he said, but others had ignored the ban and planted poppies for a second harvest. And opium markets continue to operate as usual in many areas, Mr. Shakir said.

Farmers whose poppy fields were plowed under by the previous government could send their sons to paying jobs as soldiers or police officers — or to the constellation of unskilled jobs provided by the United States and NATO. But those options are gone, and unemployment has soared under the Taliban.

In the Maiwand District of Kandahar, Nek Nazar, 41, worked to install a new water pump at the edge of his poppy field. He began growing poppies five years ago, he said, because they produced far more income than the wheat he had grown.

Mr. Nazar spoke as though the crop shift had been preordained and was not a matter of choice. For him, it was either plant poppies or starve.

“Growing poppies is the only option to survive right now,” he said.

Nek Nazar, 41, in a black turban and facing away, and his children working to install a water pump for their poppy fields in the Maiwand District of Kandahar.

8 Women and 8 Men: Germany Gets Its First Gender-Equal Cabinet