Such projects can take a decade to get from proposal to completion. This one was different. The company cut the time to about two years, seemingly a promising sign in the push to strengthen America’s energy infrastructure to distribute more solar and wind power and help wean the nation from fossil fuels.

What’s more, according to expert testimony presented by the utility, the line would reduce the need for new power plants — and ultimately provide $1.5 billion in savings — by connecting two parts of a recently merged operation.

But to others, the effort was a sly end run that avoided consideration of whether the project was needed at all. Ratepayers will be billed hundreds of millions of dollars for a project that state utility regulators never reviewed. Without the review, homeowners whose land was needed could not mount much of a fight.

Florida Power & Light paid nearly $100 million to another major utility, Duke Energy, to settle a complaint with federal regulators that the transmission project would burden its own system and cost its customers millions. And consumer watchdogs contend that the way was cleared by regulators and legislators, whom Florida Power & Light and its parent company have showered with campaign contributions and lobbying attention.

The shortcut that Florida Power & Light took was to limit the voltage on the line — to 161 kilovolts rather than 230 — putting it under a threshold that would have required extensive regulatory scrutiny. Instead, approval and funding for the line were tucked into the utility’s case for a rate increase, an outcome that a state official installed by the Legislature to represent consumer interests — a longtime lobbyist whose clients included an organization backed by utilities — was involved in negotiating.

The company said the line, scheduled to be completed in June, was more cost-effective for its customers than alternatives. The lower voltage, however, means the line loses energy over long distances without expensive equipment to support it, particularly in times of high demand.

“In any normal utility review, you would wonder why anyone would choose a line with much higher losses,” said Robert McCullough, the principal of McCullough Research, an energy consulting firm in Portland, Ore. “It costs a lot of money.”

To many of the utility’s critics, the project is the latest action by the company to skirt rules and increase electricity rates. For example, it has built virtually all of its solar facilities at a scale small enough to avoid regulatory review that could, among other things, force the utility to shut down older fossil-fuel plants that are no longer needed.

“The whole energy policy dynamic in Florida has alienated the public interest,” said E. Leon Jacobs Jr., a former chairman of the Florida Public Service Commission who was elected president of the Southern Alliance for Clean Energy, a nonprofit environmental organization, in September 2020. “There absolutely were issues and challenges that should have been made in regard to that transmission line.”

The project will be funded in part by a $692 million increase in customers’ rates in 2022 — part of $4.9 billion in cumulative rate increases over four years that the Public Service Commission approved long after Mr. Jacobs’s departure. Because of the line’s voltage, the project’s design and suitability did not require more detailed reviews by the commission and other state agencies.

Transmission data collected by the U.S. Department of Energy highlights how unusual 161-kilovolt lines are, particularly over long distances. Just 3 percent of all transmission lines in the country are 161 kilovolts, and they average five miles in length, said Mr. McCullough, who reviewed the data.

The Public Service Commission, responsible for ensuring that utility investments are prudent and avoid economic waste, declined to comment about the transmission line, its funding or Florida Power & Light’s practices, noting that the rate case could be appealed.

The company said it had met its legal and regulatory requirements.

“To be blunt, this type of criticism is misguided and demonstrates a fundamental lack of understanding of how the regulatory process works,” said David Reuter, a spokesman for NextEra Energy, which owns the utility. “The unanimous F.P.S.C. decision on FPL’s rate case is the culmination of the customary, transparent, nearly yearlong public process of reviewing and setting new electric base rates.”

Richard Gentry, who was named the state’s top consumer advocate early last year after long working as a lobbyist for tobacco, alcohol, horse racing, manufacturing and other industries, said his office had no authority to question a low-voltage transmission project.

Mr. Gentry did, however, take part in negotiations regarding the rate case that included the transmission project. The approved rate increase includes a return for the utility that is among the highest in the country and valued at as much as $1 billion more than the state’s two other investor-owned utilities (Duke Energy and Tampa Electric).

Mr. Gentry said it seemed appropriate because Florida Power & Light was trying to connect its main operations, on the state’s peninsula, with those of the company it bought, in the Florida Panhandle.

“Is this a reasonable expenditure of funds? We said, ‘Yes,’” said Mr. Gentry, whose lobbying clients included a nonprofit organization backed by utilities that he said had required him to register as a lobbyist for it even though he had done no formal lobbying. “We did not know the intricacies of it. Our jurisdiction is not nearly that broad.”

But Mike Jacobs, a senior analyst for the Union of Concerned Scientists, said it was the responsibility of regulators and consumer representatives to review any projects that affected consumers and were included in customer rates.

“The supervision of the utility company investments lands at the Public Service Commission,” Mr. Jacobs said. “The agency exists for exactly this kind of purpose. How did the transmission line get in the settlement?”

Alissa Jean Schafer, research and communications manager at the Energy and Policy Institute, a watchdog organization that promotes renewable energy, said part of the trouble was a reluctance by Florida officials to scrutinize Florida Power & Light because of its political influence.

NextEra Energy, which operates one of the world’s largest renewable-energy businesses, has played an outsize role in Florida. Its campaign contributions and lobbying prowess have made it a juggernaut in state politics and regulatory matters.

“Instead of regulating utilities in any rigorous way, the P.S.C. has, for over a decade, offered a consistent bureaucratic rubber stamp,” according to a report by the Brown University Climate and Development Lab that sharply criticized the commission. “Advocates argue that this has, in effect, allowed Florida utilities to abuse their power as regulated monopolies.”

Florida Power & Light spent more than $190 million on “certain civil, political and related activities” from 2015 through 2019, according an analysis by the Energy and Policy Institute of documents filed with the Federal Energy Regulatory Commission. That was more than twice as much as Duke Energy at just over $92 million.

“Whether we’re talking about control of the P.S.C., the Legislature or even down to the local city level,” Ms. Schafer said, “with Florida Power & Light, time and time again we see this track record of them doing whatever they feel they need to do to protect their monopoly.”

As the project reaches fruition, its impact will show up beyond ratepayers’ bills. It can be seen in Berlinda Morrison’s backyard.

Ms. Morrison has spent her life in a predominantly African American community near Tallahassee. Ms. Morrison, who barely made minimum wage in a state job, managed to buy seven acres in her deeply wooded neighborhood to enjoy in retirement — until bulldozers ripped up her land for Florida Power & Light’s towering electrical transmission lines.

“We didn’t want the power lines coming through our land,” Ms. Morrison said. “There was nothing we could do.”

Florida Power & Light doesn’t even provide electricity service for Ms. Morrison or her community, but the utility erected its transmission towers on her property anyway.

On property along Interstate 10 just east of Tallahassee, Ms. Morrison retired to a single-family home across the street from her mother’s house in Monticello. Like most of the homes along quiet Thompson Valley Road, Ms. Morrison’s sits on a lot with tall trees shading the property.

Most residents in the neighborhood have little but the land they own. Now Ms. Morrison and her neighbors wonder what that is even worth with the high-voltage power lines rising over their rooftops and disrupting their lives. 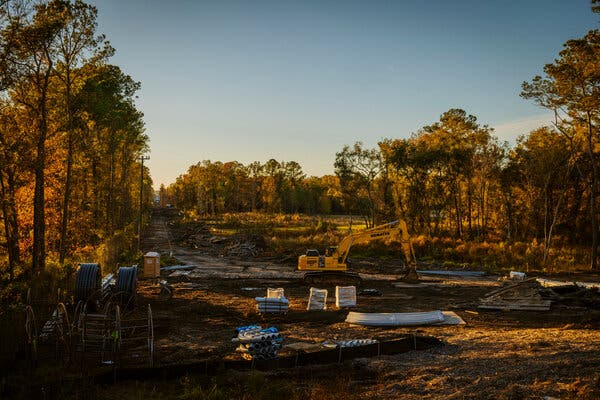 At first, Ms. Morrison said, Florida Power & Light offered her $10,000 to $25,000 for building the transmission towers on more than an acre of her property. Then her lawyer helped get a confidential settlement from the utility to help pay off her mortgage, which had 15 years left on it. The amount was confidential as part of the agreement, but she said she had owed less than $150,000.

“There were curses and blessings,” Ms. Morrison said. “Our county commissioners didn’t do anything.”

Gene Hall, chairman of the Jefferson County Board of County Commissioners, said there was little they could do. The commission held public hearings, but in the end, Florida Power & Light had eminent-domain authority. So the commission got what it could from the utility, including $1 million that would help fund projects like parks and recreation improvement and $1 million a year in tax revenue from the transmission line’s right of way and operations in the county.

“We found out that it could be a win-win for us and for them,” Mr. Hall said. “They let us know that they were strengthening the power lines and the distribution lines for when the Category 3, 4, 5 hurricanes come.”

Florida Power & Light did not explain, though, that the power line was not typical for the kind of project the utility was building, Mr. Hall said.

The unusual voltage led Duke Energy to file a complaint with the Federal Energy Regulatory Commission, saying its customers faced $222 million in direct costs. Duke said its settlement with Florida Power & Light had resolved the problems created by the low-voltage line, but it would not give details because of confidentiality.

George Hambrick, senior vice president and chief transmission officer at Duke Energy, said in an interview before the settlement that because the 161-kilovolt line lacked capacity for the potential load — like a highway with congestion that leads drivers to take other roads — “the additional power flow will cause overloads on some of our segments.”

As a result, he said, Duke will have to upgrade its equipment alongside some of Florida Power & Light’s new lines, potentially adding to the frustrations of residents like Ms. Morrison. Florida Power & Light called the settlement “an appropriate outcome for both parties.”

Beyond Florida’s borders, industry experts say, the disjointed approach to the electric grid makes it difficult to tie together regional grids into a broader system for the nation’s energy transition.

“We have 120 years of crazy regulatory practice in electricity and natural gas,” Mr. McCullough said. “There will be a day when someone will ask why they have just an extension cord there instead of the appropriate transmission line, because none of this makes good economics or engineering sense.”

A 1,500-Year-Old Riddle Solved: Yes, It Was a Terra-Cotta Porta-Potty

Patrick Ewing Needs Another Moment of Glory at the Garden