“It’s Never Too Late” is a series that tells the stories of people who decide to pursue their dreams on their own terms.

Jocelyn Nicole Johnson has been a public school art teacher for 20 years, but she is not in her elementary classroom this fall in Charlottesville, Va. Her debut collection, “My Monticello” — five short stories and the book’s title novella — will be published on Oct. 5. The Pulitzer Prize-winning author Colson Whitehead has called “My Monticello” “nimble, knowing, and electrifying,” and Esquire named “My Monticello,” published by Henry Holt, one of the best books of the fall, writing that it “announces the arrival of an electric new literary voice.”

To top that off, Netflix plans to turn the book’s title novella into a film. In the novella, which is set in the near future, a young woman who is descended from Thomas Jefferson and Sally Hemings, and a band of largely Black and brown survivors take refuge from marauding white supremacists in Monticello, Jefferson’s homestead.

The book is extraordinary for another reason. Ms. Johnson is 50 years old, not the average age of your typical debut author. To be more blunt, the publishing industry is viewed by some trade observers as too often fetishizing young writers, so while 50 is considered relatively young in many circles, for a first-time author to find her way onto the grand stage is a rarity.

The author, who lives in Charlottesville with her husband, a software engineer and photographer, and their 15-year-old son, is excited for the book to be out in the world but she is also a little nervous. “As an art teacher I can tell myself the kind of things that I would absolutely tell my students,” she said. “You made something, but it’s not you.” (The following interview has been edited and condensed.)

When did you first start writing?

Writing and art were my main interests from a very early age. I recently found this book that I wrote in the fourth grade. We had to write a story, illustrate it and bind it, and mine was called “Prom Queen.” It has a lot of vengeance in it, which surprised me. Then, when I was a teenager, I read “The Outsiders” by S.E. Hinton, that rough coming-of-age story. And I learned that Hinton was published when she was 18 years old, so I decided to write a novel, and I did it. I wrote a book at age 16. I still have copies of that book in a drawer. 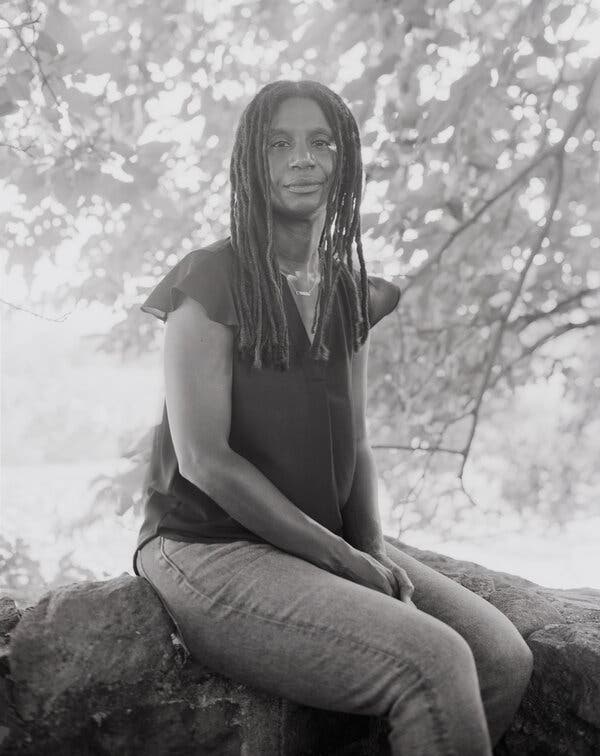 Ms. Johnson says her book, “My Monticello,” is partially inspired by the deadly 2017 Unite the Right rally that took place in Charlottesville, Va., where she lives. Credit…Matt Eich for The New York Times

When were you first published?

After I was a teenager, I put the idea of publishing a book on the back burner until much later in life. But I did like writing — I wrote that whole time — I just wasn’t making steps toward publishing my work when I was younger.

In 2017 I submitted a short story about a college professor secretly using his son for a research experiment regarding racism, “Control Negro,” to Guernica, and I was delighted when I learned that they were going to publish it. Then it was tweeted about by Roxane Gay, who went on to select it for Best American Short Stories, a prestigious annual collectionwhich she guest edited that year. I would say that was the true beginning of this book, my debut, “My Monticello,” which will make me a 50-year-old literary debutante.

Tell us about your life before this book?

I was kind of the Mr. Rogers of teachers: standing at my door with a chime and a cardigan, welcoming this very broad and diverse group of students that we have here in Charlottesville into my classroom.

What would you consider the first step you took toward publishing this collection?

How did you find the courage and strength to take that initial step?

The first step that led to this book — reaching out — came naturally to me because I had been sending my work out for so many years. So I had the habit of trying. I had the habit of persistence and trying — without a lot of expectation, which I think is a nice place to be in. A familiarity with rejection.

Do you remember your first reaction when you found out you sold the collection? That it was going to be published?

I was at home teaching virtually, because of the pandemic. It was June 2020 — the end of the 2020 school year.

It was really exciting but also a little terrifying. A lot of writers, myself included, are introverts. And you work really hard to make your book be in the world, but there’s also a vulnerability that comes with that. So I sat in that moment, and then I took a walk around the block with my husband and we debriefed. Because we could see our lives changing. I had to decide whether I was going to keep teaching. Eventually I decided, between the book deal and the pandemic, to take a break from the classroom.

Ms. Johnson is pictured with glimpses of Monticello, Thomas Jefferson’s homestead, which is the setting of her title novella. Her words of wisdom? “Embrace rejection and find your people.”Credit…Matt Eich for The New York Times

What were the biggest challenges in your journey to publication?

I enjoy writing, but it’s not all enjoyable. You can see what you want it to be, but it takes a lot of time and experience — and luck — to get your writing to where you want it to be. You often fail. You come against your own limitations.

I was writing about things that mattered a lot to me. Things that were difficult for our community here in Charlottesville. The collection is partially inspired by the deadly Unite the Right rally that took place here, as well as this country’s troubled histories going back to the time of the founding fathers. I wanted to make sure I did the best I could to be honest about my perspective. To write something that was hopefully useful and engaging to people.

Do you wish you had done this book sooner or do you feel it was right on time?

I am so pleased that this book is my debut. It incorporates so much more of my lived experience and my life and my aspirations and my hopes.

What are your future plans?

Apparently I’m going to write a second book — because I am under contract to write a second book. I’ve told myself so many times throughout the course of my life, “I think I’ll take a break from writing.” But I’m always writing. So I’m looking forward to what comes next and how I manage my expectations again as I set out. Because every book is it’s own project.

What would you tell people who feel stuck and want to make a change?

Try something small. Do something differently that’s manageable. But start. That’s what I would tell students. You have to start somewhere. Find support. Find community. And start small.

Has this experience made you a different person?

I think we’re constantly changing, and I think we should change. I’m a different person now than the teacher who greeted students at her door, or even different than the person who wrote “My Monticello.” And that’s exciting.

What lessons can people learn from your experience?

Embrace rejection and find your people.

We’re looking for people who decide that it’s never too late to switch gears, change their life and pursue dreams. Should we talk to you or someone you know? Share your story here.

Etiketler
My People She Ti̇me Who