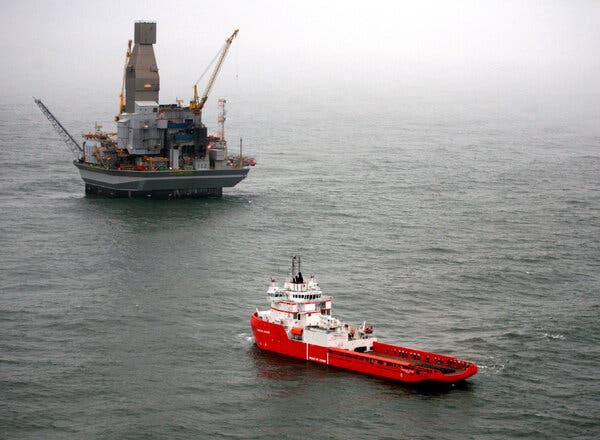 Will Russia find buyers for its crude?Credit…Sergei Karpukhin/Reuters

Crude oil prices rose this morning after a whirlwind of events that could drastically alter the supply and pricing of energy this winter.

An E.U. embargo on Russia’s seaborne oil imports went into effect on Monday, following a decision on Sunday by OPEC producers and Russia to keep production quotas unchanged. Those developments, together with an agreement on Friday by Group of 7 nations to impose a $60 price cap on Russian crude and the emergence of more signs that China is easing its Covid restrictions, set off a modest buying spree among energy traders.

By 6 a.m. Eastern, Brent crude, the global benchmark, had topped $87 per barrel, and West Texas Intermediate was above $82 a barrel.

Crude prices have whipsawed since Russia’s invasion of Ukraine in February, rocketing above $100 per barrel in the spring, only to fall over the summer on fears of a global recession. A slowdown in China in particular had capped demand, but prices have remained volatile.

Analysts have been scrutinizing fallout from the oil price cap, a move designed to punish Russia for the war in Ukraine — but also meant to avoid significant distortions in the energy markets that would force consumers and businesses to pay even higher prices for fuel.

Unsurprisingly, Moscow said this weekend that it wouldn’t accept the Western price cap, and that it would cut sales to countries that participate in the arrangement. How much of an effect that will have is unclear: Even before Monday, European countries have systematically reduced their Russian crude purchases since the start of the war in Ukraine — only for China to step in and buy more oil, often at a discount. But in recent weeks, China has paused some purchases as it waited for details of the price cap to be announced.

Helima Croft, the head of global commodity strategy at RBC Capital Markets, warned in an investor note this weekend that prices could be even more volatile in the weeks ahead as traders watch for signs that Russia could fully cut off oil exports to former trading partners in retaliation for the price cap.

Chinese cities ease zero-Covid restrictions. Shenzhen and Shanghai were the latest big cities to scrap requirements like testing before traveling on public transport, following widespread protests against Beijing’s tough pandemic rules. Shares in Hong Kong and Shanghai jumped amid investor hopes of a broader easing of Chinese Covid restrictions, though analysts warned such a move would take time.

Lachlan Murdoch is set to testify in a Fox News lawsuit on Monday. The C.E.O. of Fox will be deposed as part of a lawsuit against the network by Dominion Voting Systems. He is the highest-ranking executive to be ensnared in the lawsuit, in which Dominion argues it was defamed by Fox News anchors repeatedly amplifying false claims about the company’s voting machines in the 2020 election.

Wall Street banks weigh cutting bonuses. Bank of America, Citigroup and JPMorgan Chase may cut bonus pools for investment bankers by as much as 30 percent, Bloomberg reports, amid a steep drop in M.& A. activity. That follows plans by Goldman Sachs to cut bonuses for its traders, even though their division posted strong results.

Credit Suisse’s investment bank spinoff reportedly draws big new backers. Crown Prince Mohammed bin Salman of Saudi Arabia and a merchant bank run by the former Barclays C.E.O. Bob Diamond may invest in CS First Boston, which is set to be spun off from Credit Suisse, The Wall Street Journal reports. The spinoff is a key part of the Swiss bank’s planned revamp.

Delta reaches a nearly $8 billion pay-raise deal with pilots. The agreement in principle would raise pilots’ pay by 31 percent over four years, as well as include a one-time payout. If finalized, the agreement will set a baseline for other airlines in their negotiations with pilots.

If this is the crypto apocalypse, investors see a buying opportunity. The price of Bitcoin is up nearly 7 percent, or almost $1,200, in the past week, to just under $17,400.

But that market calm does not mean the crypto contagion is contained. The fallout from the collapse last month of Sam Bankman-Fried’s crypto exchange, FTX, has spread to other firms, setting off a wave of layoffs, lawsuits and investigations. Shareholders of Silvergate, the U.S. bank that processed payments and money transfers for FTX, sued the bank for negligence, calling the exchange a Ponzi scheme.

Meanwhile, customers of Gemini, the crypto exchange owned by the Winklevoss twins, are owed as much as $900 million from Genesis, the crypto lender that has faced severe financial distress since FTX’s collapse, according to The Financial Times. And ByBit, a major crypto exchange, announced this weekend that it would cut 30 percent of its staff, the latest firm to cut its head count as digital asset prices sink.

Here’s what else is happening in crypto:

Elon Musk is still running Twitter, so naturally, there is still plenty of drama around the social network — notably in the billionaire owner’s decision to actively promote the release of internal documents about executives’ 2020 decision to restrict tweets linking to a news report about Hunter Biden.

Despite that, it appears that some major advertisers are slowly returning to Twitter’s platform, after many hit pause following Musk’s promise to revamp how the site moderates user content.

Amazon plans to resume buying ads on Twitter, to the tune of $100 million a year, according to Zoë Schiffer of Platformer. Although the e-commerce giant, unlike others, had not quit its ad spending altogether since Musk’s takeover, it had paused some of its campaigns.

Meanwhile, Mr. Musk said in a live audio event on Twitter over the weekend that Apple had “fully resumed” ad spending on the social network. The iPhone maker has long been one of the biggest ad purchasers on Twitter. Last week, Mr. Musk said that he had resolved a feud with Apple, chalking up the disagreements to a misunderstanding.

That’s a rare bit of welcome news for Twitter’s business. The Times reported last week that the company had rapidly cut revenue projections, as U.S. ad sales continued to come in well below internal expectations. Advertisers have been alarmed by Mr. Musk’s pledges to lessen restrictions on user content, as well as a botched rollout of revamped verification badges that briefly let paying subscribers impersonate brands. Automakers like G.M. have also been concerned that Twitter could share their ad data with the Musk-owned Tesla, a key rival.

Mr. Musk introduced a new bit of drama into Twitter over the weekend, when he touted the release of the so-called Twitter Files. The independent journalist Matt Taibbi — who famously called Goldman Sachs a “vampire squid” — published internal documents showing executives’ deliberations about how to handle dissemination of a New York Post story based on files from a laptop stolen from Hunter Biden.

The move rankled some former Twitter executives, including the company’s former head of trust and safety, Yoel Roth, who said publicizing unredacted documents was “fundamentally unacceptable.” (Musk later conceded, “I think we should have excluded some email addresses.”)

“It’s like a cake that was dropped on the table and it looks more or less fine, but inside it’s all blown up.”

— Vladislav Inozemtsev, the Washington-based director of the Center for Post-Industrial Studies, a Russian research group, on the state of the Russian economy following sanctions and an exodus of Western firms.

Politics, inflation data and a trickle of earnings reports will be in focus this week. Here’s what to look for:

Tomorrow: A key Senate seat is up for grabs in the Georgia runoff election. Early-voting tallies have smashed state records.

Wednesday: New data on the health of the world’s two largest economies will be published, with U.S. consumer credit and China trade data scheduled for release.

Friday: The University of Michigan Consumer Sentiment Index and Producer Price Index data are set to come out. China will also release a fresh batch of inflation data.

We’d like your feedback! Please email thoughts and suggestions to [email protected]

Extreme Heat Puts Life on Hold in Britain, a Land Not Built for It

When Freedom Is Only the Beginning