Dozens of QAnon-boosting accounts decamped to Truth Social this year after they were banned by other social networks and have found support from the platform’s creator, former President Donald J. Trump, according to a report released on Monday.

NewsGuard, a media watchdog that analyzes the credibility of news outlets, found 88 users promoting the QAnon conspiracy theory on Truth Social, each to more than 10,000 followers. Of those accounts, 32 were previously banned by Twitter.

Twitter barred Mr. Trump over fears that he might incite violence after the riot at the U.S. Capitol on Jan. 6, 2021. He started Truth Social as an alternative in February 2022. He has amplified content from 30 of the QAnon accounts to his more than 3.9 million Truth Social followers, reposting their messages 65 times since he became active on the platform in April, according to the report.

“He’s not simply President Trump the political leader here — he’s the proprietor of a platform,” said Steven Brill, co-chief executive of NewsGuard and the founder of the magazine The American Lawyer. “That would be the equivalent of Mark Zuckerberg reposting content from supporters of QAnon.”

Millions of QAnon followers believe that an imaginary cabal of sex-trafficking, Satan-worshiping liberals is controlling the government and that Mr. Trump is leading the fight against it. Fantastical QAnon ideas have taken root in mainstream Republican politics, although some supporters have struggled at the polls.

The movement has been viewed by law enforcement as a potential domestic terror threat and was linked to the Capitol riot. Tech companies such as Twitter, Facebook, YouTube and Twitch have cracked down on QAnon content.

“The other platforms have taken some steps to deal with QAnon and other similar types of misinformation, but here, it’s pretty clear that they’re not,” Mr. Brill said of Truth Social.

Truth Social did not respond to questions about NewsGuard’s findings. Instead, in a statement sent through a representative, the social media platform said that it had “reopened the internet and given the American people their voice back.”

Mr. Trump previously retweeted more than a dozen Twitter posts from QAnon-promoting accounts in a single afternoon in 2020. Soon after, speaking about the conspiracy theorists, he said he had “heard these are people that love our country.”

On Truth Social, one user with more than 31,000 followers and three Qs in his profile name posted an image in May of Mr. Trump sitting on a throne with a crown and a Q emblem behind him. Mr. Trump reposted the image.

Mr. Trump has also amplified messages that included the QAnon slogan WWG1WGA (for “where we go one, we go all) and that referred to a “storm,” a description for the mass arrests that the QAnon faithful believe will be used to destroy the deep state. Other messages later backed by Mr. Trump included a call for “civil war” and claims that the 2020 presidential election, which he lost, was a “coup,” according to the report.

Mr. Trump also shared messages at least a dozen times from an account that posted about the “storm” and “a war against sex traffickers and pedophiles” to its more than 36,000 followers, NewsGuard found. Ricky Shiffer, a man killed by the police this month after he tried to breach the F.B.I.’s Cincinnati office, had also engaged with the same account.

Of the QAnon accounts identified on Truth Social by NewsGuard, 47 have red verification badges, which the platform says it reserves for “VIPs” with “an account of public interest.” Data.ai, which monitors app store activity, said Truth Social had been downloaded three million times in the United States on Apple iOS systems through Aug. 26.

Truth Social executives and backers have also interacted with QAnon supporters on the platform. Devin Nunes, a California Republican who resigned from Congress after 19 years to become Truth Social’s chief executive, regularly engaged with and tagged @Q. That account, which has more than 218,000 followers, has used “trust the plan” and other phrases associated with the conspiracy theory, NewsGuard said.

Mr. Trump teamed up with Digital World Acquisition, a special purpose acquisition company, to start Truth Social. Digital World’s chief executive, Patrick Orlando, has also reposted QAnon catchphrases for his nearly 10,000 followers on the platform, according to the report — which a representative for Mr. Orlando described as a “false and defamatory” accusation.

“Mr. Orlando does not follow or pay any attention to QAnon,” said the representative, Adam L. Schwartz, in an email. “And he has no idea what constitutes so-called “common QAnon catchphrases.”

Tensions Flare on Kosovo-Serbian Border Amid Protests and Gunfire 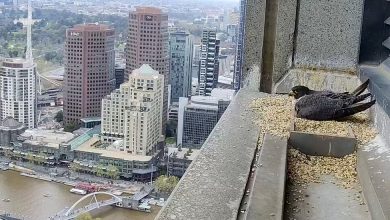 What a Serpentine District Says About N.Y.’s New Congressional Map