WELLINGTON, New Zealand — On the windswept coast of Chatham Island, about 500 miles east of mainland New Zealand, stands a statue of a thick-jowled, cheerful man, his gaze fixed on the endless sea stretched before him.

The memorial honors Tommy Solomon, who for decades has been mythologized as the last “full-blooded” member of the Moriori people, the native Polynesian inhabitants of the island. Today, many New Zealanders remember Mr. Solomon, who died in 1933, as the last survivor of a culture that drifted into extinction.

After Mr. Solomon’s death, a few hundred people with at least partial Moriori heritage remained. Over the decades that followed, they survived cultural marginalization in a country where children were taught in school that Moriori were inferior to the dominant Indigenous group, the Maori. And now they are fighting to establish themselves in the national consciousness as a thriving native people.

Elaine Goomes, a Moriori elder, felt relief when New Zealand’s Parliament approved a settlement over historical injustices suffered by the Moriori.Credit…Cornell Tukiri for The New York Times
A painting of a Moriori ancestor, Hirawana Tapu, who wrote down historical accounts of the Moriori people in the 19th century.Credit…Cornell Tukiri for The New York Times

A milestone came late last year when New Zealand’s Parliament approved a settlement over historical injustices suffered by the Moriori. The government agreed to pay the group 18 million New Zealand dollars ($12.3 million), hand over a range of property and grant a degree of control over cultural sites important to the approximately 2,000 people who now identify as Moriori.

“I never thought we’d get here, to this stage, to see such praise,” said Elaine Goomes, an elder who had traveled to Wellington, the capital, from Chatham Island, which is known as Rekohu among the Moriori. “It’s a new day.”

The history of the Moriori is one of peaceful isolation and violent subjugation.

Their origins have been the subject of debate. According to the group’s oral history, Moriori traveled directly from Polynesia to Chatham Island and its surrounding islets almost a millennium ago. Maori explorers, the Moriori legend holds, joined them only centuries later.

A pacifist culture developed among the Moriori because of their small population and the small size of Chatham Island.Credit…Cornell Tukiri for The New York Times

Some archaeologists, however, argue that the Moriori descended from successive groups of Maori who traveled to the Chatham Islands from the New Zealand mainland, perhaps around the year 1500.

What is not in dispute is that the Moriori developed a separate culture over their centuries of inhabiting the islands.

While some prominent Maori scholars have asserted that the Moriori language is a dialect of the Maori language, Moriori note that about 70 percent of the words in their language are different from their Maori counterparts.

Perhaps more important was the Moriori culture of pacifism. This tradition developed in part because of the small size of the Chatham Islands and the group’s small population, which peaked at about 2,000 people in the 18th century. A belief known as Nunuku’s Law held that if Moriori used violence outside strictly limited circumstances, their bowels would rot.

Rocks collected on Chatham Island have been arranged on the grounds of Kopinga Marae, a tribute to the Moriori’s legacy of peace.Credit…Cornell Tukiri for The New York Times

That pacifism is central to the historical injustices that the Moriori suffered, which have been chronicled in books like “Guns, Germs and Steel,” by the geographer and historian Jared Diamond, and “Cloud Atlas,” by the novelist David Mitchell.

The Moriori held to the tradition when Europeans arrived on the islands in 1791, bringing with them diseases and pests, and again, after fierce debate, when two Maori tribes that had fled brutal conflict arrived in 1835. Despite being fed and welcomed by the Moriori, the two tribes sought to claim the islands.

Maui Solomon, a grandson of Tommy Solomon and the chief Moriori negotiator in the newly completed settlement talks with the government, describes what came next as a genocide. Upward of 300 people were killed, and the remainder were enslaved by the Maori. Many subsequently died, he said, from kongenge — the Moriori word for illness arising from deep despair. 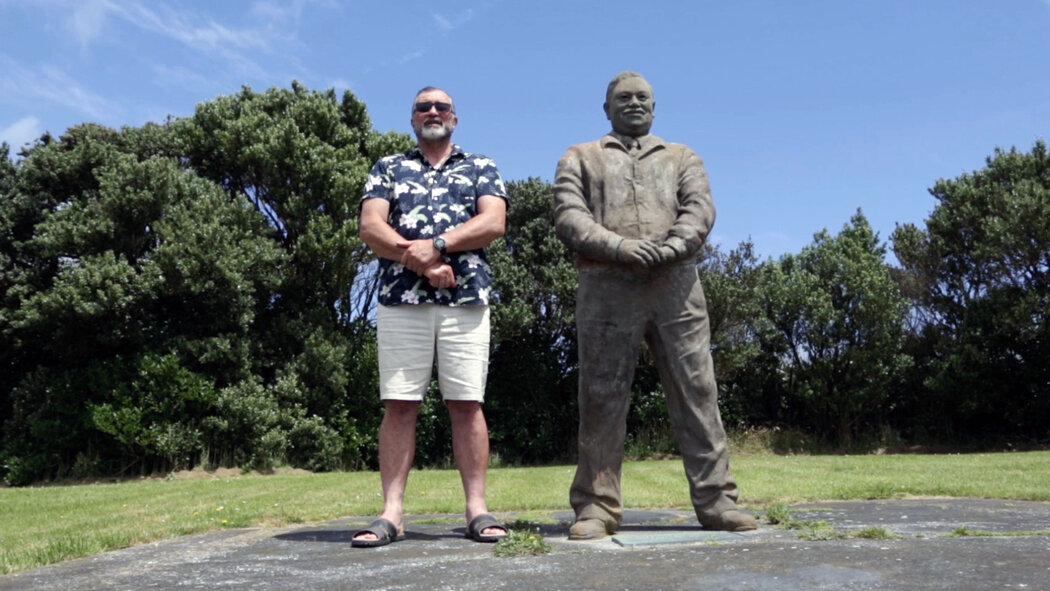 Maui Solomon reciting a karaki, or Moriori prayer, next to the statue of his grandfather Tommy Solomon on Chatham Island. This karaki invokes the blessings of the ancestors when a young man enters adulthood.

By 1870, just 100 Moriori remained. That year, a government court established to resolve property disputes awarded 97 percent of land on Chatham Island to one of the Maori tribes on the basis of its “conquering” of the Moriori.

Over the next century, myths sprang up regarding the Moriori. Ministry of Education publications promoted the now-debunked idea that the Moriori initially lived on New Zealand’s main islands and were pushed out by more advanced Maori. The story was used to justify Europeans’ colonization of Maori, portraying them as just one wave of settlers.

Michael King, New Zealand’s most prominent historian, who died in 2004, wrote that “​​nobody in New Zealand — and few elsewhere in the world — has been subjected to group slander as intense and as damaging as that heaped upon the Moriori.”

As a child, Maui Solomon said, he was told by his social studies teacher that a distinct Moriori culture was a fiction. “A lot of our people turned their face away from their Moriori identity, because it was a source of pain and hurt and confusion,” he said.

The raising of the Tommy Solomon statue marked the beginning of a small cultural renaissance. The Hokotehi Moriori Trust, the group’s main representative body, has worked with musicians, writers and software designers to publish traditional songs and stories and produce a Moriori-language learning app.

Many Moriori hope the government settlement will reinforce that renaissance and help affirm their Indigenous identity alongside Maori, who make up 17 percent of New Zealand’s five million people. Andrew Little, the government minister in charge of treaty negotiations with Maori, said in Parliament that the settlement had started “a journey of revival, reminding the rest of the world, including the rest of New Zealand, that the Moriori are a proud people.”

The settlement took years to achieve in part because of legal challenges from the Maori tribe Ngati Mutunga, whose leadership continues to claim exclusive authority over Chatham Island and fears that amends to Moriori could affect its own settlement. About 700 people, with a mix of European and Indigenous ancestry, live on the Chatham Islands today.

Residents of the main town, Waitangi. About 700 people, with a mix of European and Indigenous ancestry, live on the Chatham Islands today.Credit…Cornell Tukiri for The New York Times

The chair of Ngati Mutunga’s representative body did not respond to a request for an interview.

Maui Solomon said that while he wished the pact had gone further, “the negotiating team and our people are satisfied we’ve done everything we can in this generation to get a settlement. We probably couldn’t squeeze any more blood out of that reluctant government stone.”

Rahiri Makuini Edwards-Hammond, a Moriori student who witnessed the final approval of the settlement in Parliament, said that it would bring long-awaited recognition.

“We know who we are, we know what we went through, we know what our karapuna went through,” she said, referring to Moriori ancestors. “But more than anything, from my perspective, this is finally something that can be acknowledged by other Maori, by tauiwi” — non-Indigenous New Zealanders — “and by people around the world.”

A wharf in the village of Owenga. Many Moriori hope that the government settlement will help affirm their Indigenous identity.Credit…Cornell Tukiri for The New York Times
Tags
Maori̇ People Solomon That Who

‘A Son (Un Fils)’ Review: The Pain of Others

Ahead of Summit, U.S. Deported Chinese Nationals, and China Let an American Leave