Those who want to see Serena Williams play before she retires from tennis have one guaranteed shot at doing so.

Williams is set to play Danka Kovinic in the first round of the tournament on Monday, and if Williams loses, it could be the last time she plays tennis professionally.

Here’s what you need to know:

How did we get here?

When a hamstring injury forced Williams to retire in the first round of Wimbledon last year, many began to wonder whether the 23-time Grand Slam champion would return to the game she has dominated for the better part of more than two decades.

In mid-June, Williams gave her fans a vague glimmer of hope that she would return to the game, when she posted a picture on Instagram of her shoes on grass.

“SW at SW19,” Williams said in the caption, referring to the postal code of the All England Club, where Wimbledon is played. “It’s a date. 2022 See you there.”

Without playing in any tuneup matches, Williams made it to Wimbledon, only to lose in the first round. Then after winning a first-round match in the National Bank Open in Toronto in early August, Williams appeared on the cover of Vogue magazine, and in an article she shared that she planned to step away from tennis after the U.S. Open.

In the first-person essay, Williams said that she was “evolving away from tennis, toward other things that are important,” adding that she planned to focus on her venture capital firm and grow her family, meaning a sibling for her daughter, Olympia, 4.

Since then, she has lost in the second round in Toronto and in the first around at the Western & Southern Open in Mason, Ohio.

You’ll need a ticket for a night session on Monday in Arthur Ashe Stadium. As of Friday afternoon, the cheapest seats available on resale for Monday night in Arthur Ashe were about $253. That’s in the nosebleeds.

Do you just want a taste of the action?

Consider buying a night session ticket for Louis Armstrong Stadium and watching the Williams match on a big screen set up in front of Arthur Ashe. The Armstrong tickets won’t get you into Arthur Ashe, but you’ll be free to roam around the grounds of the U.S. Open among like-minded tennis fans, who also want to soak up the atmosphere.

Armstrong tickets on Friday were selling for about $110. There will be other night matches at Louis Armstrong on Monday, but not Williams against Kovinic.

Rather just watch at home?

Tune into ESPN on Monday to watch the match from the comfort of your home. (If you’re in Canada, tune into TSN.)

If that’s not quite enough, consider making your own Honey Deuce, the official cocktail of the U.S. Open, and you’ll feel like you’re at the tournament. (Find the recipe here.)

Who is Williams playing?

Williams will take on Kovinic, a 27-year-old from Montenegro, who is ranked No. 80 in the world. The two have never played each other.

At U.S. Open media day on Friday, Raducanu was asked about her match against Kovinic, and Raducanu said that it was a match she won’t forget.

“I don’t know how it ended up so close,” Raducanu said. “She was really, really solid, was staying with you, counterpunching. Then after you drop one after a long rally, then she would attack. She’s happy to run, happy to rally.”

What happens if Williams wins in the first round?

If Williams wins, those who missed a chance to see her on Monday will get another chance in the second round of the tournament, which starts on Wednesday for women’s singles. Williams would likely play another night match in Arthur Ashe Stadium.

In the second round, she would face the winner of Anett Kontaveit and Jaqueline Cristian. Kontaveit, the No. 2 in the world, is favored to win her match and would be a difficult opponent for Williams.

How far can Williams go in the U.S. Open?

Pam Shriver, an ESPN commentator, said it will largely depend on her health. Complicating that will be the number of adept players in the women’s draw, Shriver said.

“It’s hard for me right now to see her making a run into the second week,” Shriver said. “But it’s still fun to dream, and so until a dream is no longer possible, I’m choosing to still have it as a dream. It would be like the greatest sports story ever.”

Who else plays on Monday night?

When the Williams and Kovinic match is over, there’s still more tennis scheduled. After that match, Arthur Ashe will host the first round men’s singles match between Australians Nick Kyrgios and Thanasi Kokkinakis.

The match will be special for them because they’ve played doubles matches together over the years. Plus, any time Kyrgios is on court, fans can count on seeing one of his classic between-the-legs shots.

A Divisive Figure Around the World, Djokovic Is a Hero in Serbia

Michigan and Wisconsin Game Ends With Altercation in Handshake Line

Climate Activist Dies After Setting Himself on Fire at Supreme Court 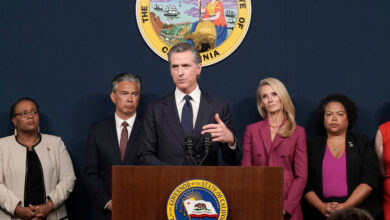