Tell us about your experience watching Serena Williams play in the form at the end of this column.

When you watch Serena Williams play from the comfortable remove of a living room, she pops from the screen. All that willpower, athleticism and skill, even as she ages and fades.

When you watch Serena Williams play live and up close, in a packed stadium during a tight match on the biggest stage — now, that is something else altogether. That’s an event, a happening, a mix of Broadway and Cannes and the Met Gala, with a whole lot of forehand winners and sometimes a soap opera mixed in.

Those performances will cease now that she is “evolving” from the game, as she announced this month, to pursue a life beyond tennis and perhaps have a second child. But her legacy goes far beyond what she did between the lines: It’s clear in the stands of every tournament that Williams’s glitz and drama beckoned to fans of all kinds, including large swaths who only pay attention to sports when she plays.

To be at a Serena match — among masses of attendees, particularly brown and Black spectators making their first foray to a professional match — was to feel a sense of new possibility for a sport long steeped in whiteness.

Take the U.S. Open, for instance. Since her ascension to tennis’s upper reaches when she won there in 1999 at age 17, Flushing Meadows has been a special stage for Williams and her fans.

In 2016, bidding for an Open-era record 23rd major singles title, the overall U.S. Open attendance figures showed nearly a quarter of fans there were Black, according to the United States Tennis Association. In 2017, with Williams’s career on hold as she sat out to give birth to her daughter, the number of Black fans at Flushing Meadows dropped by 10 percent.

That is the Serena effect.

“The magnetism of Serena attracts all kinds of new fans,” said Chris Widmaier, a U.S.T.A. spokesman. “But you can certainly see the outsize and indelible impact that she has had on Black Americans in their relationship with tennis.”

Widmaier has been working communicationsat the Open for 20 years. He has seen Williams play all over the world and figures he has watched her more than any other top player.

“When Serena would walk on the court and you had the ability to be courtside, you would get chills,” he said. “You just knew you were in the presence of greatness. And it didn’t matter at which point in her career. That is what I always felt.”

Williams’s matches always made viewers feel. And while her career — and that of her sister Venus — has drawn onlookers of all kinds, it has had special resonance for Black fans and others traditionally at the margins of the tennis scene.

The tennis star is retiring after a long career of breaking boundaries and obliterating expectations.

If that’s you, I want to hear your story. Especially if you made the pilgrimage to see Williams play in person. Even if “up close” was the nosebleed seats at the Olympic tennis stadium in Rio. Or if you made it to one of the smaller tournaments on the WTA Tour, without the Grand Slam crowds and prices.

Were you there at Indian Wells in 2001, as many in the majority-white audience booed Williams during her championship win? Were you there 14 years later, when she ended her boycott of that desert event?

What moments and images from Williams’s career, good and bad and utterly astonishing, stick with you? What compelled you to see her in person?

For me, when I think of Serena, of course, I also think of Venus. Watching them together was sports as beautiful alchemy. Just the right mix, even if their matches were sometimes full of nervousness and imperfection.

At the U.S. Open in 2008, Serena and Venus were about to clash in a quarterfinal match on a hot, humid New York evening. Two hours before, I watched as fans gathered outside the stadium. Yes, it was still a mostly white and well-heeled crowd, but it was also Black, Latino, Asian, every hue, every class.

It felt supercharged. The air surged with electric excitement and anticipation. I heard many say they would not have ventured to Flushing Meadows that evening if not for Serena. Adding Venus to the mix sealed the deal.

The sisters put on a show. There were early pockmarks of sloppy play, but in the end, the evening sizzled with excellence, and Serena affirmed her superiority, winning, 7-6, 7-6.

Looking back on the arc of Serena’s career, the swings of that match are a hallmark. She has always been capable of producing clumps of errors in batches — and then turning up the winners when everything counts. That’s part of the wonder.

On the grounds of the most significant events, it often felt like the competition had not really stepped into high gear until Williams put on a high-pressure spectacle.

A fan held a sign in support of Serena Williams during the Western & Southern Open in Ohio last week.Credit…Dylan Buell/Getty Images

Serena brought the buzz, whether she won or not. It began from the moment she’d leave the players’ tunnel and walk before the fans. If you were there at the 2018 French Open when she entered that red-clay center court dressed in her tight black, Wakanda-inspired bodysuit, the feel in the stands, the swooning and gasping and awe, will be in your mind for good.

God, I loved that moment. It gave me goose bumps.

In her boldness and bearing, Williams has always reminded me of my undaunted nieces and cousins and my late paternal grandmother, Peggy Mae Streeter, a powerful Black woman born one generation from slavery. Dressed in that bodysuit — reveling in her complete self, with that trademark “I’m gonna do my thing, no matter what” kind of attitude — Williams, it seemed to me, was channeling their unbreakable spirit.

I’m certainly not the only one to observe and feel that way. She spoke for herself and in doing so, spoke to us.

It’s strange, but I seemed to have a knack for being in the stands when Williams was surprisingly upended. The loss to Elina Svitolina at the Rio Olympics in 2016. The time she blew a 5-1 last-set lead and succumbed to Karolina Pliskova at the 2019 Australian Open. With each loss, on the grounds of those events, you could feel energy and passion drain from fans once they realized she would no longer be around.

When, in 2019, Williams worked in vain to fend off Bianca Andreescu, the talented young Canadian, I was one of the 23,000 who jammed Ashe Stadium for what may have been her last Grand Slam final.

Thinking about it now, I can still hear the proud and melancholy sound of Williams’s straining breath as she served to stay in the match, facing a third match point. I can feel her gasping exhale echoing across the stands. I can remember Andreescu dialing up a forehand reply, just as I can recall Williams’s lunge as that forehand spun by for a winner.

You had to be there to feel the poignancy. A collective, mournful groan underlay the standing ovation applause for a new and deserving champion.

This was the ultimate tennis champion on her last legs, coming up short, fighting to the end. I’m thankful to have been there as a witness. 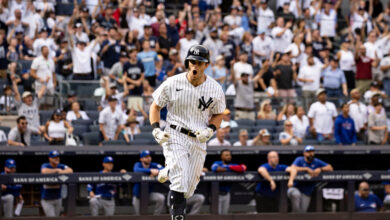 The Yankees Outlasted an Ace. Two More May Loom.

Ethics Board Moves to Penalize Jeffrey Clark, Who Aided Trump in Election Plot

What is Great Paul? The story behind the iconic bell at St. Paul’s Cathedral.