In “Blonde,” the director Andrew Dominik’s fever-dream fictionalization of Marilyn Monroe’s life, Monroe (Ana de Armas) gets pregnant in a celestial fantasy sequence. As she swigs champagne on the beach with her two lovers, the stars above them realign into an expanse of wiggly sperm. Cue gestational montage! A clump of cells appears. A pulsating embryo sprouts, resembling a gelatinous crimson shrimp. Soon a beatific, photorealistic fetus is floating in a sparkling peach brine, its fully articulated form dappled in inexplicable rays of light.

Monroe is lured into aborting that pregnancy, but when she conceives a second time, her sentient fetus reappears. Now, it’s telepathic. “You won’t hurt me this time, will you?” the fetus asks Monroe. “You’re not the same baby,” she whispers toward her own belly. The fetus replies: “That was me. It’s always me.”

Marilyn Monroe’s chatty, regenerating fetus — she calls it “Baby” — has emerged as a scene-stealing sensation. Critics have called it “goofy,” “despicable” and “cruel.” Some have even pegged it as inadvertently propagandistic — this mode of fetal puppetry is a familiar anti-abortion gimmick. But Monroe’s dialogue with her pregnancy, which originated in the 2000 Joyce Carol Oates novel on which the film is based, is also a product of the star’s troubled self-conception, and in that context, the fetus’s corny, sanctimonious message makes a kind of sense. What is jarring is the contemporary look of the fetus: a schlocky, seemingly computer-generated figure that recalls pop-culture fantasy images invented long after Monroe’s death. It’s a rendering so lazy, it suggests a stubborn incuriosity about how Monroe would have actually experienced her pregnancies, even as the film presents them as character-defining events.

Pregnancy can inspire profound acts of projection. The fetus, an unseen body inside of a body, suspended between nonexistence and existence, is defined by parental expectation and cultural imagination. It is the personification of a mother’s desires and fears, her sublimated anxieties and internalized judgments. And the Monroe of “Blonde” has plenty of issues to cast onto a prospective baby. Abandoned by her father and abused by her mother in childhood, she has become world famous as an infantilized sex object who calls all of her lovers “Daddy.” Her ventriloquized fetus is voiced by the child actor (Lily Fisher) who plays Monroe as a little girl, when she was still Norma Jeane. When Monroe communicates with her fetus, she is talking, with pity and loathing, to herself.

“Blonde” is stubbornly incurious about how Monroe (Ana de Armas) would have actually experienced her pregnancies.Credit…Netflix

What I can’t understand is why the thing looks the way that it does. In putting the fetus on display, Dominik has made a tediously literal attempt to depict Monroe’s interior life. But why would Monroe, in the early 1950s, imagine her fetus in the form of a C.G.I. baby? Why would her visualization of pregnancy resemble the smooth-skinned, preternaturally glowing fetus that appears, 70 years later, in the pregnancy app on my iPhone?

The maternal imagination is not, after all, a spontaneous soul connection. It’s a historical construction, one informed by the aesthetics, politics and technology of the time in which the pregnancy occurs. And the magic unborn in “Blonde” is an ahistoric imposition — an image that feels plucked from the narrow imagination of a modern male director. At the time of Monroe’s first pregnancy in the film’s version of her life, fetal imagery was a rudimentary fascination. Photographs published in Life magazine in the 1950s included black-and-white images of a squid-like translucent embryo and skeletal fetal remains. The vision of the fetus in “Blonde” — spectacularly well lit, fused with cosmic imagery, presented as a free-floating independent being — was not developed until after Monroe’s death. It has its roots in a 1965 Life magazine spread, “Drama of Life Before Birth,” by the Swedish photographer Lennart Nilsson.

For the magazine, Nilsson produced a series of photos of sperm, embryos and fetuses representing the stages of human gestation. Though the cover subject is advertised as a “Living 18-week-old fetus shown inside its amniotic sac,” a note inside clarifies, “This embryo was photographed just after it had to be surgically removed from its mother’s womb,” a process it “did not survive.” Nilsson was celebrated for capturing “living” fetuses within their “natural habitat” (women), but he largely photographed the lifeless products of surgical abortions and miscarriages, which he then submerged in aquariums, lit sumptuously, staged to appear as if they were floating amid starry skies, and shot at a remove.

Nilsson’s photographic tricks obliterated any trace of an actual woman’s body. The images, published at the height of the space race, were constructed as alien, analogized to galactic exploration and coded as masculine. One image of a 13-week fetus, which looks as if it is nestled inside a nebula, is titled “Spaceman.” Life quotes “a leading Swedish gynecologist” who declares: “This is like the first look at the back side of the moon.”

The 1965 Life magazine spread of Lennart Nilsson’s photography has profoundly influenced the pop-cultural life of the fetus. A note accompanying the article said the “embryo was photographed just after it had to be surgically removed from its mother’s womb,” a process it “did not survive.”Credit…Photo 12/Universal Images Group, via Getty Images

The Life feature would profoundly influence the aesthetics of both anti-abortion activists and the director Stanley Kubrick, whose model of the Star Child in his 1968 film “2001: A Space Odyssey” was partially based on Nilsson’s shots. In turn, Kubrick’s serene, fiberglass-smooth, omnipotent being would inform decades of imagined pop-culture fetuses, from the wisecracking, doll-eyed fetus of the 1989 rom-com “Look Who’s Talking” to the computer-generated fetal images that drift through pregnancy-tracker apps and animated internet videos purporting to explain “life.”

These images have the power to remove the fetus from the realm of a pregnant woman’s visceral experience and expose it as a public visual spectacle. And they yank the mind toward a pernicious modern suggestion: that the idealized fetus exists independent of a woman’s body; that it floats, in the cultural imagination, far above the earthbound woman herself.

Now, this vision has been nonsensically ported into the midcentury brain of Marilyn Monroe. That is a suspect choice, given Dominik’s insistence on recreating the iconography of Monroe’s life in obsessive detail. “Blonde” blinks between full color and black-and-white, shuffling aspect ratios and swapping lenses to more closely mirror Monroe’s most famous photographs and scenes, which Dominik then twists to signal Monroe’s perspective on being made an object.

In an interview with Decider, Dominik explained that he visualized the fetus in an attempt to access “Norma’s feelings” about her pregnancies. “Baby was real,” he said. “I wanted Baby to be real.” And yet Dominik’s brief glimpse into Monroe’s mind reveals nothing. All that can be found in there is a YouTube womb-cam.

In her book “Disembodying Women,” the medical historian Barbara Duden traces the public exposure of the fetus — and its rising cultural supremacy — over the latter half of the 20th century. She calls this process “the skinning of woman.” “Blonde” is also a movie about a woman being flayed by the culture at large. First, by the Hollywood of her own era, which made her into a sex symbol. And now, by the Hollywood of ours, which has claimed to access her mind, only to serve up a recycled stock image of a magic fetus.

Cambodia’s reopening is propelled by vaccinations. 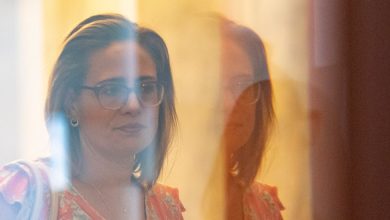 In China, Buying That Toy Gun Could Get You Arrested