It would be reasonable to expect that Adam Neumann might have a difficult time trying to win back Silicon Valley. But Mr. Neumann, whose shared office-space company, WeWork, imploded in 2019, does not appear to be facing many challenges so far. His new venture, Flow, is a service for landlords of residential real estate that has already attracted the backing of Andreessen Horowitz, a venture capital firm known for its early support of tech giants like Facebook and Airbnb. It invested about $350 million in Flow, valuing the company at $1 billion. Andreesen Horowitz’s co-founder wrote in a note that the firm loved “seeing repeat-founders build on past successes by growing from lessons learned.” Some may view this praise as misguided: Mr. Neumann was ousted from WeWork after a botched public offering and accusations of mismanagement caused the company to crash. At its height, it was worth $47 billion. Today: about $4 billion.

Is the economy heading for a serious downturn? Are consumers starting to tighten their purse strings? The answers to these questions are not clear, and one reason can be seen in the mixed second-quarter earnings reports of Walmart, Target, Kohl’s and Home Depot. Walmart reported a rise in sales and issued a slightly improved outlook for the rest of the year. But it also showed that it was struggling to navigate the inflation-related shifts in consumer behavior. That challenge was much more pronounced for Target, whose profit in the second quarter fell 90 percent from the year before as it got rid of excess inventory that price-conscious consumers didn’t want. Kohl’s saw an uptick in sales at its stores with Sephora shops, and Home Depot beat Wall Street expectations. It made note of unexpected interest in Halloween merchandise in July — in particular, a 12-foot-tall skeleton that sold out within hours — suggesting that consumers still have enthusiasm for discretionary spending.

Inflation in the United States appears to be starting to moderate, but that’s not the case in Britain. Inflation rose 10.1 percent in July compared with a year earlier, according to new data, squeezing household budgets that have already been strained by months of rising prices. Grocery stores are the source of a significant chunk of those increases: Food costs rose 2.3 percent from June to July, the fastest monthly increase in over two decades, and staples like milk and eggs are becoming noticeably more expensive. Many Britons have been forced to make adjustments to their usual grocery lists. Inflation in Britain is expected to peak in the fall, with sharply higher energy bills.

Last month, the Commerce Department reported that economic growth in the United States fell for the second consecutive quarter — a sure sign of a recession, according to one accepted definition. But most economists look to a much broader set of indicators to assess the state of the economy, including measures of income, spending and employment. And besides, the latest gross domestic product data will be revised several times, including on Thursday, when the department will release another reading based on more complete data. It will also share a first look at gross domestic income for the second quarter, which could add to the uncertainty about the economic outlook. While G.D.P. was down in the first quarter, G.D.I. — a similar but not identical measure that tracks what people earn, like wages and profits — was up. If G.D.I. is positive again, the data will be a crucial piece of evidence that the United States is not in a recession.

Peloton: Once Hot, Now Not

It has been a brutal year for Peloton, which went from being a pandemic sweetheart to a cautionary tale about the whims of consumers. In February, Peloton’s chief executive stepped down, and the company laid off 20 percent of its corporate work force. In May, it announced that it lost $757 million in the first three months of 2022. And in July, Peloton said it would no longer make bikes and treadmills at its factories and outsource all its manufacturing overseas to cut costs. What will its second-quarter earnings report bring, then? Probably nothing especially upbeat. Peloton’s shares have plummeted nearly 75 percent since January, and although its new head, Barry McCarthy, has said he’s confident that he can lead the company out of this low point, he has admitted to shareholders that “turnarounds are hard work.”

Word From the Fed Chair

Jerome H. Powell, the chair of the Federal Reserve, will speak on Friday in Jackson Hole, Wyo., where the Federal Reserve Bank of Kansas City has held an annual symposium for decades. Last year, Mr. Powell reassured the crowd — made up of other central bankers as well as economists and investors — that inflation was likely to be temporary. This time, he’ll have to answer why the opposite appears to be true. He is expected to focus much of his speech on the path ahead for inflation, which showed its first signs of easing last month. The financial markets will be listening closely for hints of whether the Fed will make another three-quarter point increase in interest rates at its September meeting or go with a half-point increase. Mr. Powell will be speaking on the heels of fresh data from the personal consumption expenditures price index, the Fed’s preferred inflation gauge, which last showed consumer prices climbing 6.8 percent over the year through June.

Starbucks was ordered to reinstate seven employees who were fired in February after leading efforts to unionize the Memphis store where they worked. Brian Stelter is leaving CNN after the network canceled his show, “Reliable Sources.” House sales fell in July for the sixth consecutive month. 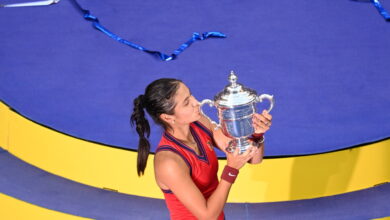 When the First Major is the Only One You Win

Is That a Burning Bush? Is This Mt. Sinai? Solstice Bolsters a Claim 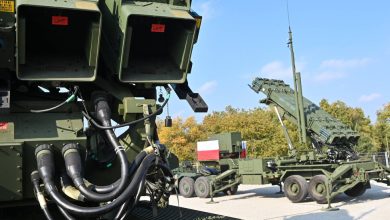 Colorado River Reservoirs Are So Low, Government Is Delaying Releases