OTTAWA — Canada’s most important — and most notoriously boring — city has found itself stuck in a never-ending tailgate party.

Giant trucks scatter the roads downtown, stretching for almost a mile, in front of the Gothic stone Parliament buildings and government offices that feel like they’ve been snatched from one former motherland — England — and plunked into the New World.

Between them, crowds of protesters wander, many wearing Canadian flags as capes or carrying them on hockey sticks and paddles. In makeshift encampments are tents and tables laden with snacks, coffee, mittens and earplugs. Grills sizzle with hot dogs. The flatbed of one trailerwith a crane attached has been converted into a stage, with four loudspeakers erected on it, pumping the classic disco song by Sister Sledge, “We Are Family.” People dance in the adjacent intersection.

“This is not my city,” said Ellie Charters, 45, crossing the street before a line of shoulder-to-shoulder tractor cabs, their metal grills festooned in flags, handmade signs and stuffed toys. Ms. Charters, a local resident, called the party scene a “sanitization” of the protest’s darker motives.

From the start, the protest, initially organized to oppose a vaccine mandate for cross-border truckers, has attracted the company of far right, anti-government and other fringe groups in Canada. In the first days, in Ottawa, at least two flags with Nazi swastikas fluttered in the crowd.Many demonstrators were draped in flags that told Prime Minister Justin Trudeau where to go, rudely. They demanded Parliament be dissolved, and Mr. Trudeau be removed from office.

Volunteers prepare food for the protesters in front of Parliament in downtown Ottawa on Wednesday.Credit…Andre Pichette/EPA, via Shutterstock

But when many of the thousands of protesters who first arrived in Ottawa went home, several hundred truckers held firm. They parked their vehicles and refused to leave — and the police could do little to force them out.

Now, the protesters who have dug into Ottawa’s core for nearly two weeks are giddy with their sense of collective purpose and, so far, perceived success. However, many of the residents who live in nearby apartment buildings and renovated heritage homes don’t see it as a celebration but as an unruly, disrespectful and even dangerous occupation.

How could a group of ostensible anti-vaccine protesters, many wonder, descend upon their city and manage to take it over?

This is the capital of a country whose constitution calls for “peace, order and good government.” Canadians are generally rule followers, and Ottawa — a quaint capital known for bureaucrats who skate along a frozen canal to work — takes that rule-following to new levels. A few years ago, a parks officer in a flak jacket shut down a lemonade stand that two little girls had set up on a grassy median because they didn’t have a permit.

As the seat of government, protests in Ottawa are almost as common as traffic jams — regular affairs that quickly wash through. However, for almost two weeks, more than 400 truckers have made camp and settled their tractor cabs — some still attached to hulking trailers — across more than a dozen blocks that Ottawa officials have deemed “the red zone.”

Between tall glass buildings and apartment towers, the trucks are flanked four to a row, for blocks. Across from a Catholic church, people have set up some barrels for bonfires.Credit…Kadri Mohamed/EPA, via Shutterstock

Not far from Parliament is the Supreme Court of Canada, in its art deco glory, where the justices don scarlet robes with white fur trim for special occasions.It sits at the end of Kent Street, which has become a type of den for protesters — a place to get warm, refuel and relax.

Between tall glass buildings and apartment towers, the trucks are flanked four to a row for blocks. Across from a Catholic church, they have set up some barrels for bonfires, feeding them continuously from a giant cord of firewood, to offer a reprieve from Ottawa’s winter chill. And right down the middle of the road is a giant open-backed truck piled with donations: boxes of sweaters and sleeping bags, toiletries and tissues. One truck has erected a mail box inscribed with “Simon Vallée Freedom Convoy.”

Blasting truck horns echoed for up to 16 hours a day during the first 11 days of the protest, but they have gone silent. The prevailing sound now is the guttural hum of very big engines, fed by a seemingly endless supply of diesel fuel.

Since the police declared that they would remove fuel supplies and arrest people bringing fuel to the trucks, plastic orange jerrycans have become a veritable fashion item. At night, it seems everyone is carrying one — as if to dare the police to try to arrest them all.

Many protesters say they are here in peace. Some get on their knees and pray outside Parliament.

“We’re all family here,” said Joseph Richard, 24, a beekeeper from Prince Edward Island, holding a hamburger made by a volunteer cook. He arrived in Ottawa the first weekend of the occupation. “They are saying we are violent and racist and white supremacist, and terrorists and a lot of demoralizing things. That’s not it at all.”

He added: “We are trying to spread love and peace.”

Messages of support covered a pick up truck at the protest site in Ottawa.Credit…Andre Pichette/EPA, via Shutterstock

But there is a definite edge — like that end-of-the-night feeling at a tailgate party, when some of the crowd might have had too much to drink, and things could go sideways. In part, it is the trucks: giant lumbering machines that offer more esprit de roadkill than peace.

Local residents say it is far more than perception. They have been harassed on the street, and recount being frightened, even chased. The police are investigating a potential arson attempt in the lobby of an apartment building downtown.

The mayor declared a state of emergency. Many locals said they felt abandoned by the police.Ms. Charters helped start a community safety program, to send volunteers to escort frightened residents out of their buildings past the protesters for errands, walks and even commutes.

“Why weren’t they enforcing the law at all? The police aren’t doing anything,” said Ms. Charters, a community activist. “We are keeping each other safe.”

Some of the only relief has come thanks to Zexi Li, a 21-year-old data analyst, who brought forward a class-action lawsuit to silence the booming truck horns. Their incessant bellowing frayed the nerves of many living near Parliament Hill. On Monday, after lawyers presented evidence that the noise could cause serious, permanent ear damage, a judge granted a 10-day injunction.

“Their image of a peaceful protest is not aligned with the reality,” Ms. Li said of the protesters, recounting the repeated experience of being heckled for wearing a mask when she left her apartment building and then being honked at.

“They seemed to enjoy the terror I felt,” she said. “They would laugh at it and cheer when I flinched at the honks.”

Now, with the injunction enforced, “they’ve lost their only tactic, which is intimidation,” she said.

Since the ban was announced, Ms. Li has been lauded repeatedly as a community hero. People have offered her portraits, groceries, guest rooms and gift cards — which captures what many residents say is the silver lining of the protest convoy.

“Ottawa has a very neighborly, community-oriented culture,” said Esther Cleman, a retiree in her 70s, who was braving a stroll around her neighborhood on Tuesday accompanied by volunteers. “This convoy seemed to spark more people to stand up and say, ‘What can I do to help?’”

Many hope it will end soon, and they will get their nice, placid, uneventful city back.

Since the police declared that they would remove fuel supplies and arrest people bringing them to the trucks, the plastic orange jerrycans have become a veritable fashion item. Credit…Lars Hagberg/Reuters

Saudi Finance Official Is Missing From Conference He Hosts 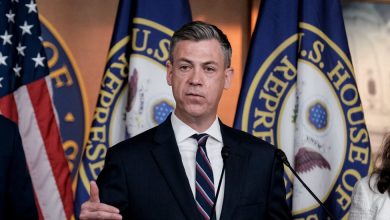