Hiding a thousand feet below the earth’s surface in this patch of northern Minnesota wetlands are ancient mineral deposits that some view as critical to fueling America’s clean energy future. 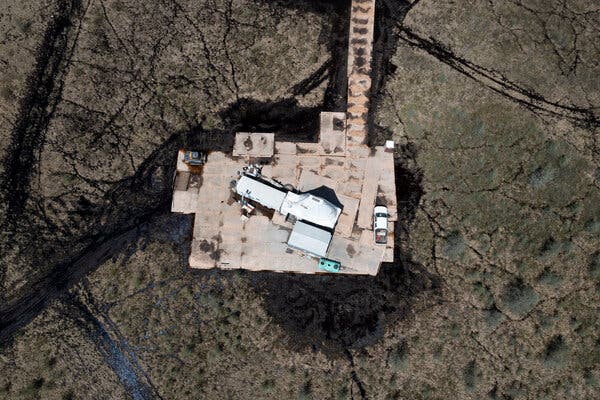 A company called Talon Metals is drilling here around the clock, extracting samples of rock rich with nickel in a bid to become the country’s sole source of a material used to power zero-emission vehicles.

But some locals are fighting the mine, for fear it could pollute their environment. The pushback hints at how difficult it may be to build an all-American supply chain that powers the country’s transition to electric vehicles.

TAMARACK, Minn. — In this isolated town of about 100 people, dozens of employees are at work for Talon Metals, drawing long cylinders of rock from deep in the earth and analyzing their contents. They liken their work to a game of Battleship — each hole drilled allows them to better map out where a massive and long-hidden mineral deposit is lurking below.

The company is proposing to build an underground mine near Tamarack that would produce nickel, a highly sought-after mineral that is used to power electric vehicles. It would be a profitable venture for Talon, which has a contract to supply nickel for Tesla’s car batteries, and a step forward in the country’s race to develop domestic supply chains to feed the growing demand for electric vehicles.

But mines that extract metal from sulfide ore, as this one would, have a poor environmental record in the United States, and an even more checkered footprint globally. While some in the area argue the mine could bring good jobs to a sparsely populated region, others are deeply fearful that it could spoil local lakes and streams that feed into the Mississippi River. There is also concern that it could endanger the livelihoods and culture of Ojibwe tribes whose members live just over a mile from Talon’s land and have gathered wild rice here for generations.

Talon says it will invest heavily to design the world’s greenest and most responsible mine yet, one that they say “Joe Biden can love.” But some people in the community remain skeptical, including about the company’s promises to respect Indigenous rights, like the tribes’ authority over lands where their members hunt and gather food. Part of that mistrust stems from the fact that Talon’s minority partner, Rio Tinto, provoked outrage in 2020 by blowing up a 46,000-year-old system of Aboriginal caves in Australia in a search for iron ore.

Kelly Applegate, the commissioner of natural resources for the Mille Lacs Band of Ojibwe, said he was “very concerned” about how the mine might damage the environment. “This again is an assault on Native culture, a disturbance of our way of being, another trauma that could potentially happen to our people,” he said.

He described it as a “huge environmental justice issue” to mine local resources for electric cars that the tribe’s members would be unable to afford. Except for some wealthy homeowners who spend their summers around the lakes, the area is one of the poorest parts of Minnesota. Native Americans in Minnesota experience poverty at higher rates than any other racial or ethnic group in the state. Locals say the only Tesla for miles is Talon’s company car.

“Talon and Rio Tinto will come and go — greatly enriched by their mining operation. But we, and the remnants of the Tamarack mine, will be here forever,” Mr. Applegate said.

The project, which lies 50 miles west of Lake Superior, highlights some of the challenges that are emerging as the Biden administration tries to transition America to electric vehicles. The administration has said it wants to make the supply chains for batteries more resilient by sourcing minerals inside North America. But that desire could bring its own potential for environmental damage and infringement of the rights of Indigenous Americans. Much of the nation’s supply of battery materials is near tribal land.

The world urgently needs to switch to cleaner cars to limit the global damage from climate change, many climate activists say. Last week, California approved a plan to ban the sale of new gas-powered cars by 2035.

But current supply chains for electric vehicle batteries — and the batteries that would be needed for the electric grid that would charge that fleet of vehicles — rely on some adversarial and heavily polluting foreign nations. Much of the nickel that goes into car batteries is produced by strip mines that have decimated rainforests in Indonesia and the Philippines, releasing vast amounts of carbon dioxide before being refined in Chinese factories powered by coal.

Another source of nickel is a massive mining operation north of the Arctic Circle in Norilsk, Russia, which has produced so much sulfur dioxide that a plume of the toxic gas is big enough to be seen from space. Other minerals used in electric vehicle batteries, such as lithium and cobalt, appear to have been mined or refined with the use of child or forced labor.

With global demand for electric vehicles projected to grow sixfold by 2030, the dirty origins of this otherwise promising green industry have become a looming crisis. The Democrats’ new tax and climate bill devotes nearly $400 billion to clean energy initiatives over the next decade, including electric vehicle tax credits and financing for companies that manufacture clean cars in the United States.

New domestic high-tech mines and factories could make this supply chain more secure, and potentially less damaging to the global environment. But skeptics say those facilities may still pose a risk to the air, soil and water that surrounds them, and spark a fierce debate about which communities might bear those costs.

The project is near lakes and streams that feed into the Mississippi River, and where Ojibwe tribes have gathered wild rice for generations.

The potential risks to plants and wildlife come from the sulfide ores; the ores, in which materials like copper and nickel are lodged, can leach out sulfuric acid and heavy metals. More than a dozen former copper mines in the United States are now Superfund sites, contaminated locations where taxpayers can end up on the hook for cleanup.

In January, the Biden administration canceled leases for another copper-nickel mine near a Minnesota wilderness area, saying the Trump administration had improperly renewed them.

Talon Metals insists that it will have no such problems. “We can produce the battery materials that are necessary for the energy transition and also protect the environment,” said Todd Malan, the company’s chief external affairs officer and head of climate strategy. “It’s not a choice.”

The company is using high-tech equipment to map underground flows of water in the area and create a 3-D model of the ore, so it can mine “surgically” while leaving other parts of the earth undisturbed, Mr. Malan said. Talon is also promising to use technology that will safely store the mine’s toxic byproducts and do its mining far underground, in deep bedrock where groundwater doesn’t typically penetrate.

Talon has teamed up with the United Steelworkers union on work force development. And Rio Tinto has won a $2.2 million Department of Energy grant to explore capturing carbon near the site, which may allow the mine to market its products as zero emission.

“We can produce the battery materials that are necessary for the energy transition and also protect the environment,” said Todd Malan, the chief external affairs officer and head of climate strategy at Talon.

In a statement, Talon said it was committed to “meaningful consultations with tribal sovereign governments and tribal people” and producing a mine plan that addressed their concerns, as well as working with tribal governments interested in economic benefit sharing.

The company has held several informational meetings with tribal staff and members, but some tribal members say they still need far more details from Talon about its plans.

If the mine comes online in 2026 as scheduled, it will be positioned to feed a hungry market. The United States currently has one operating nickel mine, in Michigan, but its resources will be exhausted by 2026.

In Washington, a bipartisan consensus is growing that the country should reduce its reliance on risky overseas minerals. To limit global warming to the levels that advanced countries have agreed on, the International Energy Agency estimates, the world will need roughly 20 times as much nickel and cobalt by 2040 as it had in 2020 and 40 times as much lithium.

Recycling could play a bigger role in supplying these materials by the end of the decade, and some new car batteries do not use any nickel. Yet nickel is still highly sought after for electric trucks and higher-end cars, because it increases a vehicle’s range.

Talon’s proposed mine could help Tesla meet those thresholds. Tesla gets its nickel from China, Australia, New Caledonia and Canada, and its chief executive, Elon Musk, has begged miners to produce more.

Some environmental and left-leaning groups that have long been skeptical of domestic mining are adjusting those positions, arguing that resources are needed for the energy transition.

Collin O’Mara, the chief executive of the National Wildlife Federation, said that there was a growing need for battery materials that were mined responsibly, and that Talon was promising to use state-of-the-art techniques to minimize the mine’s footprint.

But he acknowledged that for local residents it would still take a leap of faith in new technologies and Talon’s ability to apply them. “There still isn’t an example of an existing mine that has had no impacts,” he said.

The economic potential — and the environmental risks — may go far beyond a single mine. The entire region is home to deposits of nickel, copper and cobalt, which were formed 1.1 billion years ago from a volcano that spewed out miles of liquid magma.

Talon has leased 31,000 acres of land in the area, covering an 11-mile geological feature deep under the swamp. The company has zealously drilled and examined the underground resources along one of those 11 miles, and discovered several other potential satellite deposits.

Elizabeth Skinaway, a member of the Sandy Lake Band of Minnesota Chippewa, is especially concerned about damage to the wild rice, which she has gathered in lakes near the proposed mine for 43 years.

In August, the company announced that it had also acquired land in Michigan’s Upper Peninsula to explore for more nickel.

Talon will start Minnesota’s environmental review process within a few months, and the company says it anticipates a straightforward review. But legal challenges for proposed mines can regularly stretch to a decade or more, and some living near the project say they will do what they can to fight the mine.

Elizabeth Skinaway and her sister, Jean Skinaway-Lawrence, members of the Sandy Lake Band of Minnesota Chippewa, are especially concerned about damage to the wild rice, which Ms. Skinaway has been gathering in lakes several miles from the proposed mine for 43 years.

Ms. Skinaway acknowledges the need to combat climate change, which also threatens the rice. But she sees little justice in using the same kind of profit-driven, extractive industry that she said had long plundered native lands and damaged the global environment.

“We were here first,” said her sister. “We should be heard.”

The Talon drill site near Tamarack. 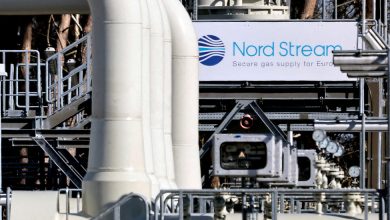 Rockaway Beach Is Partially Closed. That’s Not Stopping These Beachgoers 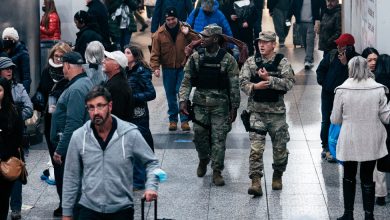 How a Jewish Group’s Online Surveillance Uncovered a Synagogue Plot

How the West Marshaled a Stunning Show of Unity Against Russia