Former President Donald J. Trump may have thought that he was playing offense when he asked a federal judge last week for an independent review of documents seized from his residence in Florida — a move that, at best, could delay but not derail an investigation into his handling of the records.

But on Tuesday night, the Justice Department used a routine court filing in the matter to initiate a blistering counteroffensive that disclosed new evidence that Mr. Trump and his legal team may have interfered with the inquiry.

In the filing, in Federal District Court for the Southern District of Florida, department officials revealed more details about the classified materials that Mr. Trump had taken from the White House, including a remarkable photograph of several of them arrayed on the floor of Mar-a-Lago, his home and private club in Florida. In what read at times like a road map for a potential prosecution down the road, the filing also laid out evidence that Mr. Trump and his lawyers may have obstructed justice.

It was as if Mr. Trump, seeming not to fully grasp the potential hazards of his modest legal move, cracked open a door, allowing the Justice Department to push past him and seize the initiative.

“The Trump team got more than they bargained for,” said Preet Bharara, a former U.S. attorney in Manhattan and a longtime critic of Mr. Trump. “In response to a thin and tardy special master motion, D.O.J. was given the opportunity to be expansive.”

Federal prosecutors do not appear to be close to a decision about whether to charge Mr. Trump or anyone else in the documents case. Nor is it yet clear what harm, if any, to national security was done by Mr. Trump’s decision to keep the classified documents at his beachfront club — or even what specific subjects they covered.

Mr. Trump escaped the Russia investigation led by the special counsel Robert S. Mueller III without facing obstruction charges, covered at the time by a Justice Department legal memo that guides against indicting a sitting president. But bringing a new case focused on the documents found at Mar-a-Lago would also be politically fraught, given that Mr. Trump seems to be planning another run for the White House.

Still, the Justice Department’s objection to Mr. Trump’s request for a special master to review the retrieved material was nothing if not expansive. Unfolding over 36 pages, it combined complicated legal arguments with an easy-to-read narrative of how, in the course of more than a year, Mr. Trump and his lawyers repeatedly dodged the government’s attempts to get the documents back.

Covering its final page was what Mr. Bharara called “an extra proverbial thousand words”: an image of five yellow folders marked “Top Secret,” and a red one labeled “Secret,” lying on the ground beside a box of magazine covers.

The image, which seemed to be a standard evidence photo, was the sort of thing the government collects all the time for use at possible trials. But because Mr. Trump and his lawyers made disputed statements about their handling of the records, it gave the Justice Department an opportunity to publicize the photo, which has now appeared repeatedly on TV news.

On Wednesday, going back on the offensive, Mr. Trump attacked the image.

“Terrible the way the FBI, during the Raid on Mar-a-Lago, threw documents haphazardly all over the floor,” he wrote on his social media platform. He went to say, in a just-asking sort of way: “(Perhaps pretending it was me that did it!)”

Later that same evening, Mr. Trump’s lawyers angrily renewed their call for a special master in the case, telling a federal judge that Mr. Trump had merely possessed “his own presidential records.” In an 18-page filing, the lawyers suggested that by undertaking what they called an “unprecedented, unnecessary and legally unsupported raid” on Mar-a-Lago, the Justice Department was “criminalizing a former president’s possession of personal and presidential records in a secure setting.”

More on the Trump Documents Inquiry

Taken at face value, Mr. Trump’s request for a special master was an effort to claw back presidential records that he and his lawyers contended were protected by executive privilege. But if it is successful, it could also slow down the Justice Department’s inquiry into whether he had wrongfully kept the material in the first place and subsequently interfered with the investigation.

The Justice Department rebutted the first claim Tuesday night by pointing out that Mr. Trump, as a former president, did not have the power to assert executive privilege over the documents when federal prosecutors — current members of the executive branch — had a court-ordered warrant to obtain them. The brief also noted that a delay for a special master review would be unnecessary given prosecutors had already completed their own review.

As is frequently the case with Mr. Trump, the papers his legal team filed to the judge overseeing the matter, Aileen M. Cannon, did more than just make legal arguments. They often drifted into irrelevant subjects (the former president’s polling numbers) or made extraneous complaints (such as one about “farcical Russian collusion claims.”)

While Mr. Trump’s lawyers have sought to portray the former president as the harried victim of government persecution, they have also claimed that he cooperated fully with the government’s attempts to get the documents back.

Mr. Trump’s lawyers said that in May, the former president “voluntarily” accepted a grand jury subpoena seeking documents still in his possession that bore “classification markings.” One month later, according to the lawyers’ account, Mr. Trump met with a top federal prosecutor and three F.B.I. agents who had gone to Mar-a-Lago to pick up the materials demanded by the subpoena.

Greeting them in the dining room of his estate, Mr. Trump assured the men that he was there to help. “Whatever you need,” the papers quoted him as saying, “just let us know.”

In its filing on Tuesday, the Justice Department took issue with this obliging portrait of the former president, offering a cinematic picture of how Mr. Trump and his legal team had stymied efforts to retrieve the documents.

When the delegation from the Justice Department arrived at Mar-a-Lago on June 3, one of Mr. Trump’s lawyers handed over a single Redweld envelope, double-wrapped in tape, explaining that the records inside had come from a storage room. Another lawyer — identified as Christina Bobb, according to people familiar with the matter — signed a certification letter, the filing said, swearing that “a diligent search” had been conducted and that all of the classified materials on the property had been turned over.

But when the delegation tried to visit the storage room, the filing said, one of the lawyers “explicitly prohibited” officials from opening or looking into any of the other boxes there. That, the filing said, stopped them from confirming that no materials with classification markings had been left behind.

Investigators soon discovered evidence — possibly from interviews with witnesses — that classified documents remained at Mar-a-Lago. Eventually, the filing said, the Justice Department came to believe that government records had likely been “concealed and removed from the storage room” and that efforts may have been taken “to obstruct the government’s investigation.”

It was that belief, it seems, that led to the search of Mar-a-Lago on Aug. 8. As the Justice Department bluntly pointed out, when the F.B.I. descended on the property, agents discovered over twice the number of classified documents that Mr. Trump’s lawyers had handed over after their “diligent search” in June — including three that were found not in the storage room, but in desks in the former president’s office.

It is not uncommon for prosecutors conducting investigations to reveal new details — even striking ones — in court filings. But the Justice Department’s filing Tuesday night was specifically intended to rebut what senior law enforcement officials described as a false narrative about the run-up to the search at Mar-a-Lago that was pushed by Mr. Trump and his associates in their court papers and in the news media.

John P. Fishwick Jr., an Obama appointee who served as the U.S. attorney for the Western District of Virginia and had been critical of the department’s previous, less expansive filings, said that the Justice Department had started to shift its tactics.

Over the past week, what was initially meant to be a tightly argued legal brief focused on objecting to the appointment of a special master expanded into something much broader, the officials said. The filing became a more pointed presentation of evidence of the Justice Department’s belief that it had no choice except to seek a warrant for the search at Mar-a-Lago.

The F.B.I. searched Mar-a-Lago after officials came to believe that government records had likely been stored at the home of the former president.Credit…Josh Ritchie for The New York Times

In compiling the brief, the officials said, one of the last — and most significant — steps the department’s leadership took was to submit a motion in Federal District Court in Washington to unseal two grand jury subpoenas. One of the subpoenas, which was included in the filing, was the request for Mr. Trump to turn over the documents at Mar-a-Lago. The other asked for footage from surveillance cameras at the property to confirm the movement of some of the materials.

Matthew Miller, a former spokesman for the Justice Department, said the final product was a perfect distillation of Attorney General Merrick B. Garland’s oft-repeated belief that if the department needs to say something, it should only speak through its filings.

“That has been the difference between Trump and D.O.J.,” Mr. Miller said. “Trump keeps saying things publicly he can’t back up in court while D.O.J. waits in the grass and then shows up with a knockout blow.”

“And because Garland has been so conservative in his approach to the job,” he added, “those punches land even harder.”

Months After an Explosion, a Town Is Deserted and Without Answers 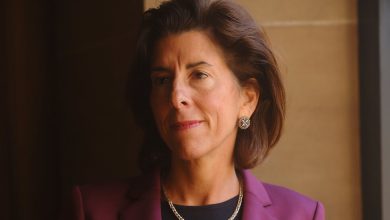