Black Americans have been hired much more rapidly in the wake of the pandemic shutdowns than after previous recessions. But as the Federal Reserve tries to soften the labor market in a bid to tame inflation, economists worry that Black workers will bear the brunt of a slowdown — and that without federal aid to cushion the blow, the impact could be severe.

Some 3.5 million Black workers lost or left their jobs in March and April 2020. In weeks, the unemployment rate for Black workers soared to 16.8 percent, the same as the peak after the 2008 financial crisis, while the rate for white workers topped out at 14.1 percent.

Since then, the U.S. economy has experienced one of its fastest rebounds ever, one that has extended to workers of all races. The Black unemployment rate was 6 percent last month, just above the record low of late 2019. And in government data collected since the 1990s, wages for Black workers are rising at their fastest pace ever.

Now policymakers at the Fed and in the White House face the challenge of fighting inflation without inducing a recession that would erode or reverse those workplace gains.

Decades of research has found that workers from racial and ethnic minorities — along with those with other barriers to employment, such as disabilities, criminal records or low levels of education — are among the first laid off during a downturn and the last hired during a recovery.

William Darity Jr., a Duke University professor who has studied racial gaps in employment, says the problem is that the only reliable tool the Fed uses to fight inflation — increasing interest rates — works in part by causing unemployment. Higher borrowing costs make consumers less likely to spend and employers less likely to invest, reducing pressure on prices. But that also reduces demand for workers, pushing joblessness up and wages down.

“I don’t know that there’s any existing policy option that’s plausible that would not result in hurting some significant portion of the population,” Mr. Darity said. “Whether it’s inflation or it’s rising unemployment, there’s a disproportionate impact on Black workers.”

In a paper published last month, Lawrence H. Summers, a former Treasury secretary and top economic adviser to Presidents Bill Clinton and Barack Obama, asserted with his co-authors that the Fed would need to allow the overall unemployment rate to rise to 5 percent or above — it is now 3.5 percent — to bring inflation under control. Since Black unemployment is typically about double that of white workers, that suggests that the rate for Black workers would approach or reach double digits.

In an interview, Mr. Summers said that outcome would be regrettable and, to some extent, unavoidable.

“But the alternative,” Mr. Summers argued — “simply pretending” the U.S. labor market can remain this hot — “is setting the stage for the mistakes we made in the 1970s, and ultimately for a far larger recession, to contain inflation.”

Employment gains in July, which far surpassed expectations, show that the labor market is not slowing despite efforts by the Federal Reserve to cool the economy.

Many progressive economists have been sharply critical of that view, arguing that Black workers should not be the collateral damage in a war on inflation. William Spriggs, an economist at Howard University, cautioned against overstating the Fed’s ability to bring inflation under control — especially when inflation is being driven in part by global forces — and underestimating the potential damage from driving interest rates much higher.

Black workers will suffer first under a Fed-induced recession, Mr. Spriggs said. When that happens, he added, job losses across the board tend to follow. “And so you pay attention, because that’s the canary in the coal mine,” he said.

In a June 2020 essay in The Washington Post and an accompanying research paper, Jared Bernstein — now a top economic adviser to President Biden — laid out the increasingly popular argument that in light of this, the Fed “should consider targeting not the overall unemployment rate, but the Black rate.”

The Fed didn’t take Mr. Bernstein’s advice. But in the years leading up to the pandemic, Fed policymakers increasingly talked about the benefits of a strong labor market for racial and ethnic minorities, and cited it as a factor in their policy decisions.

After Mr. Biden took office, he and his economic advisers pushed for a large government spending bill — which became the $1.9 trillion American Recovery Plan — in part on the grounds that it would avoid the painful slog that job seekers, particularly nonwhite workers, faced after the 2007-9 recession and would instead deliver a supercharged recovery.

Federal pandemic relief provided a cushion for Ms. Jordan, at her home near Atlanta with her husband and children. Credit…Rita Harper for The New York Times

“It’s been faster, more robust for African Americans than any other post-recessionary periods since at least the 1970s,” Cecilia Rouse, the chair of Mr. Biden’s Council of Economic Advisers, said in an interview. Black workers are receiving faster wage gains than other racial and ethnic groups, and have taken advantage of the strong job market to move into higher-paying industries and occupations, according to an analysis of government data by White House economists shared with The New York Times.

Menyuan Jordan is among them. Ms. Jordan, who has a master’s degree in social work and was making a living training child care providers in February 2020, saw her livelihood upended when Covid-19 struck.

“The money was based off face-to-face professional development that went to zero almost immediately overnight,” she said. “I couldn’t afford the rent.”

But pandemic relief packages from the federal government helped cushion the blow of lost earnings. And by last winter, Ms. Jordan had landed a job as a mental health clinician near her home in Atlanta — one that offered training and paid roughly $13,000 more than her prepandemic role, which she estimates brought in $42,000 annually.

Administration officials say they are optimistic that Black workers can continue to see higher wages and improving job opportunities even if the labor market cools. But Goldman Sachs analysts, echoing a common view, recently concluded that average wage gains for workers would need to fall much further to be consistent with the Fed’s inflation goals.

Fed policymakers are still somewhat hopeful that they can bring down inflation without causing a recession or undoing the gains of the past two years, in part because of a hope that the labor market can slow down mainly through reductions in job openings rather than layoffs.

Jerome H. Powell, the Fed chair, has made the case that only by bringing inflation under control can the central bank create a sustainably strong labor market that will benefit all workers.

“We all want to get back to the kind of labor market we had before the pandemic,” Mr. Powell said in a news conference last month. “That’s not going to happen without restoring price stability.”

Some voices in finance are calling for smaller and fewer rate increases, worried that the Fed is underestimating the ultimate impact of its actions to date. David Kelly, the chief global strategist for J.P. Morgan Asset Management, believes that inflation is set to fall considerably anyway — and that the central bank should exhibit greater patience, as remnants of pandemic government stimulus begin to vanish and household savings further dwindle.

“The economy is basically treading water right now,” Mr. Kelly said, adding that officials “don’t need to put us into a recession just to show how tough they are on inflation.”

Michelle Holder, a labor economist at John Jay College of Criminal Justice, similarly warned against the “statistical fatalism” that halting labor gains is the only way forward. Still, she said, she’s fully aware that under current policy, trade-offs between inflation and job creation are likely to endure, disproportionately hurting Black workers. Interest rate increases, she said, are the Fed’s primary tool — its hammer — and “a hammer sees everything as a nail.”

Reflecting on a dinner she recently attended in Washington with “really high-level, all-white progressive economists,” Ms. Holder, who is Black, said there was a “resigned attitude” among many of her peers, who want positive near-term outcomes for people of color overall but remain “wedded to the use of mainstream tools” and ask, “What else can we do?”

Mr. Darity, the Duke professor, argued that one solution would be policies that helped insulate workers from an economic downturn, like having the federal government guarantee a job to anyone who wants one. Some economists support less ambitious policies, such as expanded benefits to help people who lose jobs in a recession. But there is little prospect that Congress would adopt either approach, or come to the rescue again with large relief checks — especially given criticism from many Republicans, and some high-profile Democrats, that excessive aid in the pandemic contributed to inflation today.

“The tragedy will be that our administration won’t be able to help the families or individuals that need it if another recession happens,” Ms. Holder said.

Morgani Brown, 24, lives and works in Charlotte, N.C., and has experienced the modest yet meaningful improvements in job quality that many Black workers have since the initial pandemic recession. She left an aircraft cleaning job with Jetstream Ground Services at Charlotte Douglas International Airport last year because the $10-an-hour pay was underwhelming. But six months ago, the work had become more attractive.

Morgani Brown returned to an employer she had left in Charlotte, N.C., when the hourly pay rose. Credit…Damola Akintunde for The New York Times

“I’d seen that they were paying more, at $14,” she said, “so I went and applied for Jetstream again.” She remains frustrated with some work conditions, but said the situation had “ended up being better.”

With rents rising, she saves money rooming with her boyfriend and another friend, both of whom work at an Amazon fulfillment center. Ms. Brown, who has a baby on the way, is aware that the e-commerce giant has recently cut back its work force. (An Amazon official noted on a recent earnings call that the company had “quickly transitioned from being understaffed to being overstaffed.”)

Ms. Brown said she and her roommates hoped that their jobs could weather any downturn. But she has begun hearing more rumblings about people she knows being fired or laid off.

“I’m not sure exactly why,” she said.

Teachers across France stage a one-day walkout over Covid rules. 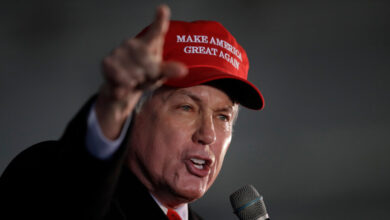 L. Lin Wood, a Trump Ally, Is Called to Testify in Election-Meddling Inquiry

Pac-12 Commissioner Keeps It Professional, but Pointed, After Defections