The actress Emma Thompson, who has spoken out about Hollywood’s unrealistic body standards for women, took social media heat this summer after a photo went viral of her apparently in a fat suit, an image from the coming film adaptation of the stage musical version of “Matilda.” In July, audiences watched the muscular Chris Hemsworth work off his dad bod in “Thor: Love and Thunder.” And now a resurgent Brendan Fraser is making the rounds of the fall film festivals promoting “The Whale,” wherein he portrays a struggling 600-pound disabled gay man from under layers of prosthetics.

Other stars we’ve seen adding the padding, either real or manufactured, for a role include Sarah Paulson (“American Crime Story: Impeachment”), Colin Farrell (“The Batman”), Christian Bale (“Vice”) and Tyler Perry as Madea in numerous films.

The first answer that comes to mind is money: Movies need to turn a profit, and the surest way to generate ticket sales is to pump up the star power. So it’s no surprise that producers want bankable names to lead movies and shows.

But thanks to the entertainment industry’s history of avoiding plus-sized talent in leading (or most any) roles, very, very few have achieved that level of bankability. Yet if Hollywood took a chance on actors of bigger sizes, isn’t it possible enough of them could be elevated into an army of top-notch talent to choose from?

J. Kevin Thompson, a retired professor of psychology from the University of South Florida, has spent decades studying the images and perceptions of fat people in the media. While the early days of the fat suit in film may have served a practical (read: financial) purpose, he said in an email, more recent uses of it can prove psychologically damaging to both viewers and the actors themselves — and women, both onscreen and in the audience, can bear the brunt of the pain.

For men, the opportunity to pile on the pounds slowly is a distinct privilege. “You can’t shut a production down while your A-list actor eats his way through Italy for three months or so unless you are De Niro,” Thompson said via email, referring to the actor’s Oscar-winning turn in “Raging Bull” (1980). “Afterward, it became a badge to go all-out Method to gain the weight without the fat suit unless you were female.”

He added, “I’ve looked far and wide and can find maybe 10 percent of women who were allowed to actually gain the weight for films.” He pointed to Renée Zellweger, who gained at least 20 pounds for “Bridget Jones’s Diary,” or Charlize Theron, who said she put on 50 extra pounds for “Tully.”

Unlike male actors, Thompson added, women seemed destined for fat suits, made to add quick pounds in a matter of hours without regard for the impact on their psyche. He theorized that for actresses, becoming suddenly large could feel like a nightmare come to life.

The popular franchise of superhero films and TV series continues to expand.

While that theory relies on general psychology tenets surrounding things people fear, rather than formal research, Thompson said, “seeing oneself embodied as a fat person would likely cause intense anxiety (especially for actors, particularly female, who have spent much of their life managing appearance and weight as a job requirement).”

As for viewers, Thompson said, “I think it’s more likely girls and women who will see many triggers in women in media who are transformed via fat suits.”

As with “Friends,” fat suits too often are solely used as a gag — unrealistic looking (see Eddie Murphy in “The Nutty Professor”) to such a laughable degree that even in a drama, they induce giggles. For example, Tom Hanks has gotten some snickers for his obese Col. Tom Parker in “Elvis.” This only adds to the perception of fat people as something to laugh at.

In 2007, Thompson co-wrote an analysis of fat stigmatization in movies and television that affirmed that perception.

“These roles were most often associated with ‘humor,’ which, of course, might not be so funny if one were the butt of the joke,” he said of the study’s findings.

As the use of fat suits became more prominent this year, the public debate has grown more heated: Last month, the HBO talk show host Bill Maher skewered the idea that only large-sized actors could play large-sized characters, supporting instead casting that doesn’t take race, ethnicity, sexual orientation or size into consideration.

“Casting directors have to stop listening to the casting police and go back to doing their job, which is picking the best actor for the role,” Maher wrote on Twitter, a comment that drew clapbacks on social media.

The idea sounds appealingly simple, but falls flat. Much as in other industries, if producers aren’t challenged to widen their net, the “best actor for the role” tends to be drawn from the status quo: white people, slender people, whatever the case may be.

Since not every role or production requires the same level of star power, why can’t casting agents give opportunities to the many immensely talented unknown actors in bigger bodies?

The time, salary and manpower poured into fully enveloping Paulson in prosthetics to portray Linda Tripp in “Impeachment: American Crime Story” rendered her so unrecognizable, I had to wonder: Why her? In the same series, the beautifully curvy Beanie Feldstein successfully snagged the role of the beautifully curvy Monica Lewinsky, so the producers are aware that sensible casting is possible.

Similarly, viewers could hardly see Farrell through the layers of makeup and prostheses glommed onto him in his role as the Penguin in “The Batman.” Not once could I discern the Irish actor under all the FX, so it’s not clear what we would have lost without him in the role. None of this is to diminish the talents of Paulson or Farrell, who are actually two of my favorite performers on the big and small screens. But a hungry upstart could have brought a different edge, zest and curiosity to these roles that could’ve turned heads.

In some instances, fat suits can work — for example, when a slender actor becomes the doppelgänger of the real-life person they’re portraying (as with Bale evoking Dick Cheney in “Vice”). Similarly, it can work when used to show the physical progression of a character within a relatively short period of time, as with Hemsworth in “Avengers: Endgame” and the latest “Thor.” It makes little sense to have another actor don the dad bod if one presumes Thor stayed around the same age as he dropped weight. However, another actress altogether certainly could have played a Monica far removed in age from her present-day self on “Friends.”

A similar spirit of laziness has long been seen in casting decisions for characters of color: Who can forget the caramel-hued actress Zoe Saldaña playing the singer Nina Simone in a much-maligned biopic of the proudly dark-coffee-skinned performer? Sure, Saldana brought name recognition to an indie production, but in such a small-scale film, care could have easily been given to selecting an unknown for the lead. And that might have raised eyebrows for the right reasons.

Whether it’s for laughs or dramatic effect, at the end of the day, stuffing slender actors into a fat suit feels like a cop-out in casting. Rethinking casting choices is not only about representation but also about more nuanced storytelling. The actress Chrissy Metz, for example, presumably earned a role on the NBC smash series “This Is Us” on the merits of her talent, not her size, yet her size still was crucial to her character arc.

Yes, it’s well past time for producers to be less observant of body shapes, but let’s also give larger performers a legitimate chance to shine based on more than their appearance. True representation means not just considering, but casting large-sized actors in any role. And that is the shift that could foster big change in Hollywood.

U.S. Officials Travel to Venezuela, a Russia Ally, as the West Isolates Putin 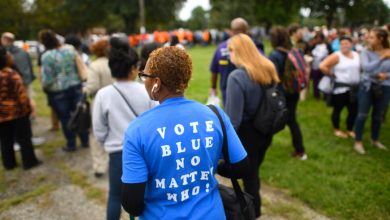 How Much Longer Can ‘Vote Blue No Matter Who!’ Last?

A coronavirus infection illuminates a migrant worker’s tale of inequality in China.