OAKLAND, Calif. — “Can I show you my lab?” Bryant Terry asked before walking to a shed in his sunny, compact backyard. As wide as a king-size bed, the chef’s “lab” is a lofted work space with a standing desk and, on the floor, a striking framed photo of the musicians Ann Peebles and Al Green sitting barefoot on a porch.

Underneath a Chez Panisse poster, a library lines a portion of one wall, with a collection of books about art, culture and food. A portrait of the Southern chef Edna Lewis and a line drawing of the Black Panther Party’s Free Breakfast Program flyer are among the pieces of art decorating the space.

It’s here that Mr. Terry, 47, has worked for the past year or so, taking calls and Zoom meetings. This lab, which functions as both home office and creative space, is meant to keep him inspired. It is also a reminder of all of the beautiful, meaningful aspects of Black art. “For me, music, art and culture are inseparable in Black culture,” he said. 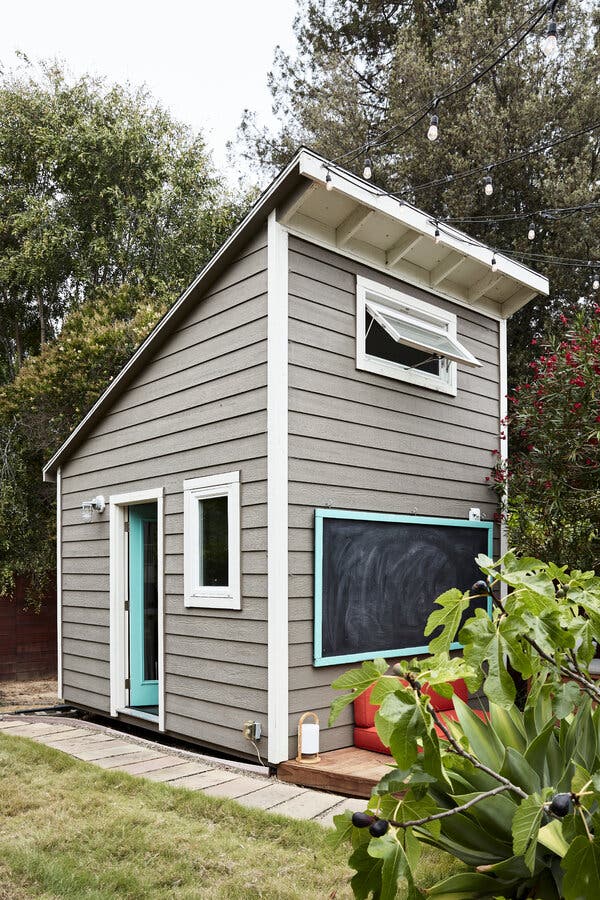 For most of the pandemic, Mr. Terry has worked from his “lab,” a small shed behind his home in Oakland, Calif.Credit…Seth Smoot for The New York Times

Mr. Terry is a celebrated cookbook author and has served since 2015 as the chef-in-residence at the Museum of the African Diaspora, in San Francisco, so it might come as a surprise that much of his brainstorming doesn’t take place in a kitchen. But as Mr. Terry explains, lately he has been looking beyond the medium of food to understand how best to preserve Black food stories.

In May, the publisher Ten Speed Press announced that Mr. Terry would lead an imprint called 4 Color Books, bringing two to three titles written by writers of color to market each year for the foreseeable future. (The imprint also employs a lead editor, a creative director and a cultural strategist.) The first, “Black Food,” edited by Mr. Terry, is an attempt to showcase the breadth of Black culture around the world, and will be released on Oct. 19.

In his lab, he flipped through one of the first printings of the book — a dense, colorful anthology featuring a galaxy of Black voices sharing recipes, stories and artwork, and dissecting and analyzing their connection to food, drink, spirituality, culture, belonging, rest and self-care. It’s more spiritually aligned with a gallery exhibit than a cookbook.

There are recipes from chefs, including Alexander Smalls, Nina Compton, Mashama Bailey and Mr. Terry himself. (Yewande Komolafe, a columnist for The Times, is among those who contributed a recipe.) Scholars like Jessica B. Harris and artists like Emory Douglas contributed essays and vivid illustrations and photography. “I wanted people to be able to look at it like a coffee-table book, or go into their kitchens and use it as a cookbook if they want,” Mr. Terry explained. “It speaks to the ethos of 4 Color Books.”

Mr. Terry flipping through the pages of “Black Food,” the first publication from the 4 Color Books imprint.Credit…Seth Smoot for The New York Times

Like many businesses, the publishing industry was profoundly impacted by the racial reckoning of 2020, when its overwhelming whiteness was called into question both online and behind closed doors. Now, more than a year later, the results of calls for greater diversity among those who decide what gets published have begun to materialize.

Titles by Black authors are hitting the market at an increased rate, including within the food sphere, where Black chefs are landing more lucrative deals for cookbook projects. Through 4 Color Books, Mr. Terry hopes not only to diversify shelves but also to open avenues to bring more Black people into publishing.

“Following the reckoning, a lot more people became intentional about their book purchases,” said Toni Tipton-Martin, an author and journalist, and the editor in chief of Cook’s Country magazine. Ms. Tipton-Martin contributed to the “Black Food” anthology, and has spent much of her career documenting the work of Black food professionals in the United States in books like “Jubilee: Recipes From Two Centuries of African American Cooking.”

Shesees 4 Color Books as a way to increase the number of authors of color who are able to secure deals. Before receiving an offer from a publisher for her 2015 book, “The Jemima Code,” Ms. Tipton-Martin posted free selections from the book online to drum up interest, saying it was her “only option.” The book went on to win a James Beard Foundation book award in 2016. “What this imprint says is that now there will be more room for more and varied voices,” she said.

Aaron Wehner, the executive vice president of Crown Publishing and the publisher of Clarkson Potter and Ten Speed Press, said the new imprint was a natural extension of the company’s work with Mr. Terry. “Bryant’s entire career has been about successfully creating and nurturing communities,” he wrote in an email. “We jumped at the chance to expand our longtime relationship beyond his own books.”

In some ways, Mr. Terry always knew this moment was coming. Having written five cookbooks highlighting vegetarian and vegan African American cooking — including “Vegan Soul Kitchen,” “Afro-Vegan” and “Vegetable Kingdom” — as well as recipes inspired by the African diaspora,he often felt as if he was challenging both historical and contemporary ideas about what Black cooking looked like in the public imagination.

“The institution of chattel slavery was complex, and it wasn’t a monolith,” he said. “Enslaved Africans’ relationship to food and cooking was shaped by a number of factors, including geographic location and the financial status and disposition of plantation owners.”

Cooking during the era of slavery in the Americas looked different in the Carolinas, in the Caribbean, in Louisiana, and to call it “slave food,” he said, is “a misinformed, reductive and racist way to frame Black cuisine.” These labels flatten the story of Black cooking in this country. They don’t speak, for instance, to the beauty and nuance of cooking techniques and ingredients like dark leafy greens, beans, pole beans and sweet potatoes (what Mr. Terry calls “Black superfoods”) that have long been a part of Black cooking.

Mr. Terry’s childhood in Tennessee, where his family lived mostly off the land, showed him the importance of holding on to these traditions. As a child, he said, he was fascinated by his grandmother’s cupboard of pickled peaches, tomatoes and other items that she had canned herself.

After moving to Brooklyn to study history, with an emphasis on African American history, at New York University, Mr. Terry enrolled in 2001 at the Natural Gourmet Institute for Health and Culinary Arts, where he noticed that teachers, his peers and the media were leaving Black cooks out of the conversation.

“It’s much more appealing for these national media outlets to cover a college-educated white person who is doing canning, pickling and preserving when people have been doing that for years,” he said.

In considering which authors he’d like to work with, Mr. Terry said he looked for those who are shaping the culture at this moment and who will continue to do so. After “Black Food,” 4 Color Books will publish the debut cookbook from Rahanna Bisseret Martinez, a 17-year-old chef in Oakland and a “Top Chef Junior” finalist, as well as a new book from Scarr Pimentel of Scarr’s Pizza in New York City.

“‘Black Food’ is a communal shrine to the shared culinary histories of the African diaspora,” Mr. Terry writes in the book’s introduction.Credit…Seth Smoot for The New York Times

“As soon as my literary agent told me about this imprint, I knew I had to submit my book idea to him,” Ms. Bisseret Martinez said. “I really wanted to work with him because he has experience and a creative voice that I may not have had at another imprint.” Her first cookbook, “Flavorous,” will be released by 4 Color next year.

“This new role is formalizing what I’ve been doing for years, which is mentoring younger writers, helping people of color who are trying to navigate the publishing world or thinking of writing a book,” Mr. Terry said. That work is leading him to think about his imprint as “a pipeline for Black food creatives and people of color in publishing.”

Bringing as many people into the conversation as possible is what Mr. Terry may be able to do better than others, said Alice Waters, the chef and owner of Chez Panisse, whom Mr. Terry considers a mentor and friend.

“He’s a very special cook and teacher, and it’s hard to be both,” she said. “The conversation needs to be in the kitchen and around the book, and not from a podium. That’s how we empower the next generation to learn by doing.”

“I think the most impactful part of 4 Color will be modeling how we want the publishing world to be,” Mr. Terry said. “The informal tagline is: 4 people of color, 4 coloring outside of the lines,” and, as a nod to Black women and Black culture, “4c hair.”

He Sold Away His People’s Heritage. He’s in the Jungle to Get It Back.

Germany will again offer free Covid tests to all adults.

Intrigue Deepens at U.N. Over Myanmar and Afghanistan