For an English-speaking visitor to Asia — which spans close to 50 countries — navigating a new language can be daunting at first. A walk down a busy road in Malaysia, for example, may bring you into contact with Malay; written Simplified Chinese; spoken Mandarin, Cantonese or Hokkien; Tamil and perhaps even Hindi.

But while language can be a hurdle, it can also be a joy. We’ve collected some of the best language apps and technology for travelers to Asia — from full-fledged machine-learning translators to a simple tweak to your phone’s keyboard. With a small amount of help, you can translate dozens of languages and scripts, illuminate pictographs and characters, and learn something new.

Let your camera do the work

When I first used a translation app in Asia, at the relative dawn of the industry (circa 2014), the only real option for non-Roman characters was Waygo. I could point my phone camera at a menu or a sign, it would take Chinese characters, Japanese kanji and kana, and Korean hangul, and instantly translate it to English on the screen. A feat, almost of magic. 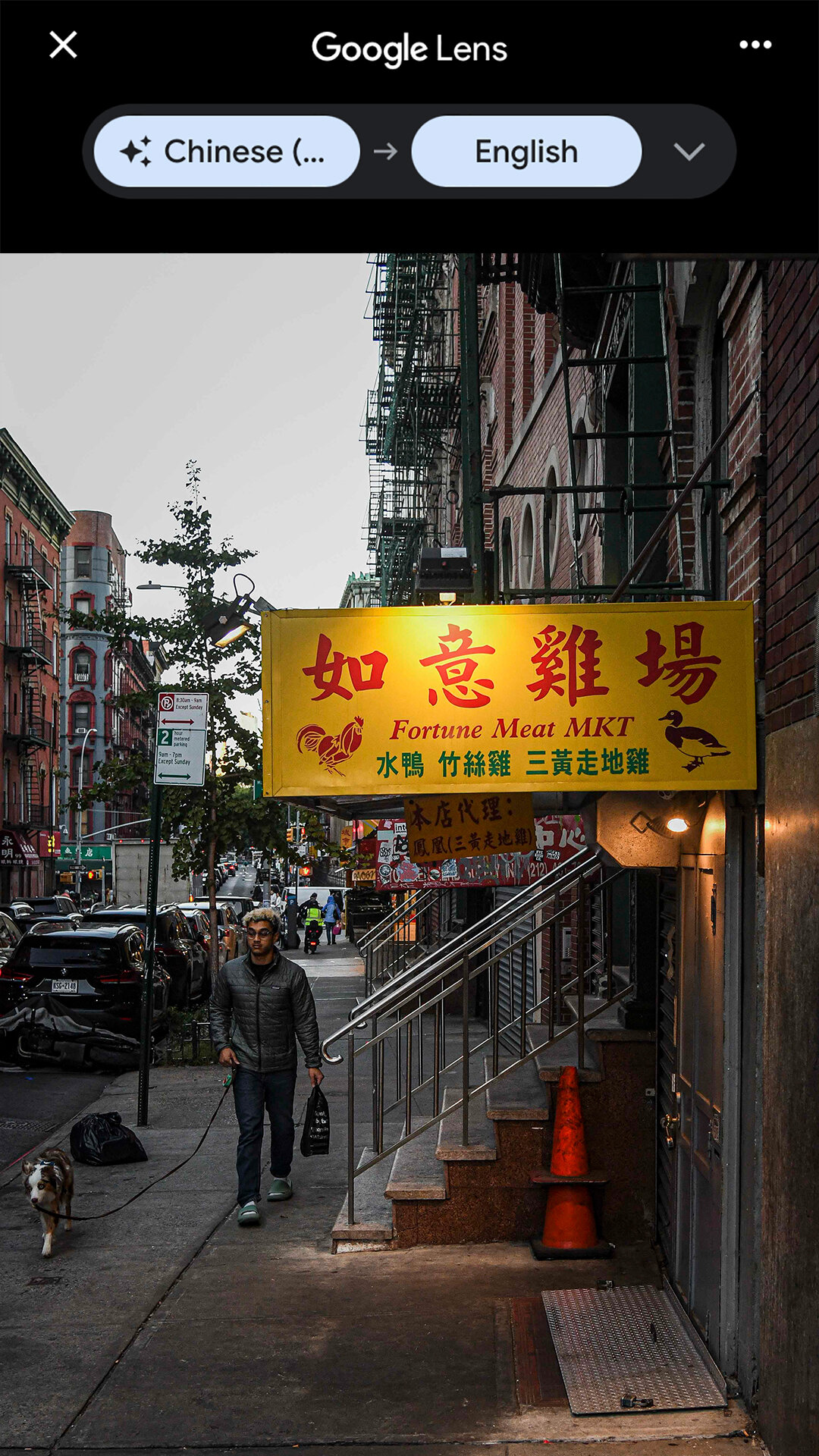 An example of Google Translate’s camera feature, using signage from Fortune Meat Market in New York City’s Chinatown. The smartphone app can help you in a pinch, but is far from perfect.

Across the board, photo apps are quick, functional, and generally offer decent translations — especially of printed material. ‌Google’s translator easily dealt with a customs import form written in Thai, or a simple newspaper story written in the Hindi script Devanagari.

Travelers should also keep in mind that Google is blocked or otherwise hard to access in mainland China, meaning that you may have to use one (or multiple) of the alternatives.

‌Try ‘handwriting’ what you want translated

Some smartphone apps let you use your finger to sketch any character you see — whether Chinese characters or Korean hangul — to get a quick translation.

Character drawing is useful for translating unusual fonts or reflective surfaces, which can confound photo translation apps. Calligraphy, say, on a banner outside a restaurant, can be more common in parts of Asia than a typeset sign. When I tested it recently in Manhattan’s Chinatown, a shop window’s heavily laminated sign would not register on Google’s photo app.

Google Translate and Papago offer character drawing, but Google had an annoying habit of inputting a character before you’ve finished fully drawing — which puts you into a somewhat frantic race against time, and can radically change meanings. (An initial translation for the Korean for “How much is it?” came out as “Is it frozen?”)‌

Regardless, to commit to character drawing is to sign up for some time spent scribbling on your palm. The process works more smoothly for simpler scripts like Japanese hiragana and katakana, and is more involved for Chinese and some Korean hangul. (Those traveling to Taiwan should remember that Traditional Chinese characters are the standard, which are even more complex.)

The kinetic process of handwriting in these apps can be good for an intermediate or advanced language learner, who might want to learn characters in a more active way while traveling. Those learners can try Pleco (for Chinese) and Kanji Recogni‌zer (for Japanese, Android only), which are essentially dictionary apps and provide more detailed translations and shades of meaning.

‌A useful tip: Some smartphones actually have handwriting as an installable option in their keyboard settings. So while Microsoft Translator, for example, does not have handwriting functionality, you can just use your keyboard to draw characters into its standard text translate field, and it will work just the same.

For those who prefer to talk, speech-to-text (and text-to-speech) is offered on many of these translation apps, including Google Translate, Microsoft Translator, Papago and Pleco.

The app SayHi — which has Cantonese, Hindi or Thai, among other languages — specializes in voice and audio, and can ‌play ‌your translation in a man or woman’s voice and vary the speed. It also keeps a history of all your translations, so you can replay a phrase you use often, like “I’m allergic to seafood!” It even has a conversation mode: You select two languages, set the phone down between two people, and take turns speaking back and forth.

Overall, Google and Microsoft worked fine, but would often halt after five or six seconds while Say Hi routinely managed 20 to 30 seconds at a time. This extra listening time is often crucial to catch the half-sentences, or general confusion of a live voice translation.

The real issue with voice-to-text is its practical value. In a busy cash-only rice roll restaurant in Manhattan’s Chinatown, I used SayHi to ask if the cashier had change for a hundred. The noise of banging sheet pans and steamers drowned my phone’s microphone out; she ended up reading the translation off my screen instead.

Any travel can be improved by memorizing even a little bit of the local language, and there is an abundance of learning apps to help. A few lessons in Korean and Japanese, for example, will teach you the characters of hangul and hiragana, which will at least let you read things out phonetically.

Duolingo is the giant green owl in the room, but its Asian language courses are generally less robust than its European ones. Beginners might have more luck trying Lingodeer (for Chinese, Japanese, Korean and Vietnamese) or Memrise (for Chinese, Japanese and Korean). Both use videos of native speakers, which Duolingo lacks; Lingodeer also provides lengthy grammar lessons and explainers.

I personally had the greatest success with Memrise, and learned about five different characters of hangul in 30 minutes during a particularly long taxi before a flight took off. However, be aware that Memrise and Lingodeer’s free offerings are limited.

All three apps can also be combined with the alternative keyboards mentioned previously‌. So instead of just tapping on buttons, you can answer your Japanese Duolingo prompts by drawing kana on your phone screen, which speeds up the learning process.

For other languages, the learning app Drops has a wider array that includes Cantonese, Hindi, Indonesian and Thai.

Asia is a tremendously diverse place for languages, and there is no one-stop shop to navigate all its regional variations and dialects. Even a language like Cantonese, which has millions of speakers across multiple countries, can be hard to find apps for.

Broadening your toolbox can be key. One of the best ways to learn Cantonese, for example, is a podcast. Search for CantoneseClass101 in your podcast player to find free episodes, stretching back to 2014, that teach you basics in 10 or so minutes, along with cultural background — such as the ubiquity of “m goi,” (唔該) which can mean “thank you,” “sorry” or “excuse me,” depending on context. The similar podcast VietnamesePod101 has a section on “survival phrases,” with which, in about eight minutes, I learned not just “thank you,” but how to say “auntie” and “uncle” — probably the most important words you can utter.

Another great Cantonese resource is the subreddit r/Cantonese, which is full of people who are passionate about learning and preserving the language and culture‌.

You can also tap into the resources that other learners have already created for you. Anki (on iPhone as AnkiMobile, on Android as AnkiDroid) is a general learning app that lets you create custom flashcards — with custom recorded audio — and has a rich library of community-created language sets that you can download. You can choose a beginner’s set for Shanghainese with 1,500 cards, a set of Thai tones and characters (complete with helpful mnemonics), a set of 33 Vietnamese foods — or make your own. 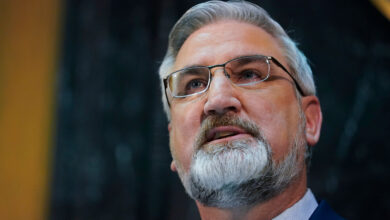 The Biggest Promoter of Mexico’s Presidential Recall Election? The President.

Hochul Has Raised $34 Million So Far. Her Goal May Be Double That.