Gail Collins: Bret, I think we’ve got good fighting topics this week, but let me start with a rather mellow question.

Presidential primaries already in the news! How do you feel about Joe Biden’s push to make South Carolina the first state to vote on the Democratic side? Certainly driving Iowa crazy ….

Bret Stephens: It was Biden’s big win in South Carolina in the 2020 primaries that rescued his flailing campaign. I’ll take this as further evidence that the president means to run for re-election. Remember the ’90s dance tune, “Things That Make You Go Hmmmm…”? This is a “Thing That Makes You Go Oy.”

Gail: Hehehe. I’ve spent a goodly amount of time in Iowa over the years and always liked talking with the folks who were so proud of their standing as first-choosers.

But the last time, really, was a disaster. The Democratic Party workers just couldn’t get stuff straight. I remember one leader saying: “I don’t even know if they know what they don’t know.”

So I could go for … taking turns. This time South Carolina. Next time, maybe Michigan. For the Democrats, anyhow. Do the Republicans have a consensus, or do they even care?

Bret: I like your suggestion, provided there’s enough demographic and geographic variety. The point isn’t just to choose the person who appeals to the base. It’s also to test the candidates’ abilities to connect to a wide variety of voters, particularly those who are more center-leaning.

Gail: Hey, the fringe has feelings, too.

Bret: As for Republicans, I just hope someone other than Mr. Revoke-the-Constitution announces his or her intent to run. I also hope Republicans take their own lesson from the midterms, which is that they can win when they run with normal candidates but will lose when they nominate crazies.

Gail: Ah Bret, your faith in the ability of the Republican Party to avoid crazies is touching. Notice I did not say … crazy.

Bret: Question for you, Gail. Of the potential G.O.P. field besides Donald Trump — Ron DeSantis, Mike Pence, Nikki Haley, Mike Pompeo, Glenn Youngkin, Ted Cruz — who do you think would be the most formidable in a general election?

Gail: Well, the idea of a Cruz campaign gives me the giggles. If the weather gets unpleasant, maybe he’d move the convention from Milwaukee to Cancún.

Bret: Another Cruz campaign would be like a remake of “Ishtar,” only without the original’s wit, originality and box-office success.

Gail: DeSantis is the non-Trumpian favorite, I guess, but I have my doubts about his talent as a presidential level campaigner. Nikki Haley always seems promising, then never really delivers ….

Really, you’re the one who should be judging. Give me your opinion.

Bret: Haley would be a better candidate in a general election than DeSantis, both because she has a better personal story and more human warmth. But the party’s heart right now seems to be with the Florida governor. If the two run as a ticket, they’ll be formidable contenders.

Bret: What I long for, Gail, is the return of the Republican Party I used to vote for — the one that believed in lower taxes and less regulation, free trade and the defense of free nations, law-and-order and fidelity to normal democratic principles. There were aspects of that party I never liked, especially when it came to its moralistic obsessions, but I could live with them so long as it didn’t seem to threaten the basic social compact in the country. Now, especially after the Dobbs decision and the rise of so-called national conservatism, I wonder whether that party will ever exist again. I suspect I know what you think ….

Gail: Yeah, sorry Bret. I think your party has been gobbled up by the crazies.

Bret: To adapt Billy Joel: You may be right. They may be crazy. And it still might be a lunatic they’re looking for.

Gail: Meanwhile, alas, I don’t think mine is really going to suit you. Which reminds me: I’ve really been rooting for Biden to get around the court challenges to his student loan forgiveness program. Doesn’t look promising, and I presume that makes you happy?

Bret: Yep. Federal courts have been rightly skeptical of any presidential decision, made with no input from Congress, that will cost taxpayers $400 billion or more. It’s an abuse of the separation of powers, an insult to everyone who paid off their debts and a giant moral hazard when it comes to other types of debt. I gather you see it, er, differently?

Gail: Well yeah. We’ve got a generation of Americans who were encouraged to take out big federal student loans — often by scummy for-profit schools that never really delivered anything. Even those who went to good colleges were never given the proper information about their likely future earnings compared with debt.

Bret: I don’t see people who get student loans as victims. I see them as beneficiaries who won’t make good on their end of a bargain.

Gail: You’re talking about a multitude of earnest young people whose lives are going to be hamstrung — and a lot of them will simply never get out of the hole. I say, let’s put this behind us, and make sure borrowers of the future have a really clear idea of what they’re getting into.

Bret: From what I’ve read, undergraduates who finish their degrees borrow an average of about $30,000 for a degree that will raise their lifetime incomes by at least half a million, which sounds like a good deal, and the students with the biggest loans are often those who are going to law school or getting other professional degrees, meaning they can usually expect higher lifetime earnings. This just seems like a giant giveaway to young progressives who don’t like the idea that loans are things you have to repay.

Gail: I’m betting on Raphael Warnock, the incumbent Democrat. As opposed to a guy who barely seems to know what the Senate does, who also appears to be a legal resident of Texas.

Bret: Walker is a bottomless gift. To Democrats.

Gail: Whoever wins, the Democrats will at minimum have control of the Senate with that vice-presidential vote thrown in. But if it was really, truly a matter of which party would be in charge, would you be tempted to grit your teeth and support the dreadful Republican in this case?

Bret: No. Never. Ever. Just the fact that he managed to make it to a runoff is a sign of how much is wrong with the United States today. A near-majority of voters in Georgia would rather vote for a moral delinquent with no grasp of the issues at hand than someone with whom they merely disagree.

Can we talk about something a little less … depressing? How about the World Cup?

Gail: Sure, um … briefly. Back in the day, I remember being amazed when friends from overseas started getting worked up over this game my domestic pals and I had never heard of.

Gail: Still never actually sat through a game, to be honest. You’re an international traveler, so tell me what you think.

Bret: For all the problems, both with the host country, Qatar, and the organization that oversees the World Cup, FIFA, the whole event is a great global uniter and equalizer. Little Tunisia beats France. Cameroon beats mighty Brazil. America beats Iran — but Iranians cheer because the loss embarrasses their oppressive rulers. People become madly patriotic, but respect the patriotism of the opposing players. It’s wonderful, even if (or maybe because) it’s so ethereal.

Gail: I hear you.

Bret: Also, it has produced some of the very best writing I’ve seen in The Times recently. Take this gem of a sentence from Andrew Das about Brazil’s 1-0 win over Switzerland: “So with an entire nation methodically reducing its supply of fingernails, it was a sturdy veteran midfielder, Casemiro, who strolled up from his position deep in midfield and did the job himself.”

Bret: Or this beauty, from Rory Smith, about the Dutch goalkeeper Andries Noppert: “His own interpretation of his unusual career arc — the long, slow burn, followed by the sudden and unexpected ignition — is that his progress was slowed not only by a succession of injuries but by his own failure to grasp his talent.”

Gail: I always love the way you quote our terrific writers.

Bret: If you don’t want to watch the games, Gail, just read our coverage. It will provide relief from, well, everything. 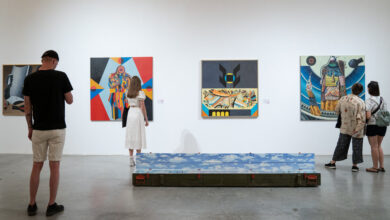 How the war changed a Kyiv museum’s view of its past.

Across the World, Covid Anxiety and Depression Take Hold

Swimmer at Long Island Beach May Have Been Bitten by Shark, Police Say