Valerie Maynard, a Harlem-bred artist whose sculptures and prints explored the complexity, but also the humanity, of Black identity while tackling racism in the civil rights and apartheid eras and beyond, died on Sept. 19 in Baltimore. She was 85.

The writer Alexis De Veaux, a longtime friend, said she died of cardiac arrhythmia in a hospital.

While Ms. Maynard, who was aligned with Black Arts Movement of the 1960s and ’70s, explored various mediums and materials over a six-decade career, her work was consistently unflinching in its social commentary. It mined the historical legacies of oppression, both at home and abroad, while also celebrating the joy in the African American cultural experience and the beauty of the Black visage and form.

“This is art that summons, that creates what should be and disassembles what should not,” Toni Morrison wrote in the introduction to “Lost and Found,” a limited-edition 1989 portfolio of Ms. Maynard’s lithographs. That portfolio was part of “No Apartheid,” a celebrated series of more than 250 works using spray-painted acrylic that Ms. Maynard produced in the 1980s and ’90s. “The medium is dream,” Ms. Morrison added, “but the power is magic.”

Ms. Morrison, Stevie Wonder and Lena Horne were among the notables who purchased Ms. Maynard’s work. Her sculptures were also seen in “If Beale Street Could Talk,” Barry Jenkins’s 2018 film adaptation of the 1974 novel by Ms. Maynard’s longtime friend James Baldwin.

The plot of that book and movie involves a young sculptor imprisoned for a crime that he did not commit. Ms. Maynard and others who knew Mr. Baldwin believed that the story was based in part on the experience of Ms. Maynard’s older brother, William Maynard Jr., an aspiring actor known as Tony, who was a friend of Mr. Baldwin’s and who had been falsely accused of murdering a Marine, leading to more than six years in prison before he won his release.

Ms. Maynard provided her own commentary on such injustices with works like her acclaimed sculpture “We Are Tied to the Very Beginning,” a bust of a Black male head, its face frozen in an expression of agony with two fists clenched on a wood pedestal beneath it.

Although Ms. Maynard never achieved the fame of Mr. Baldwin, Maya Angelou, Amiri Baraka or some of the other artists associated with the Black Arts Movement, her influence was deeply felt.

“Valerie Maynard is one of the most important postwar American artists that most people have never heard of,” Bill Gaskins, the founding director of the Photography + Media & Society program at the Maryland Institute College of Art, said in a phone interview. Mr. Gaskins wrote an essay for the catalog of a 2020 retrospective of Ms. Maynard’s work at the Baltimore Museum of Art.

“She was committed to the evolution of the human species,” Mr. Gaskins said. “What did it mean to be human from the perspective of women? Of Black people? All the while, she was subtly revealing the contradictions of life in the 20th and 21st centuries, always with an eye toward our better selves.”

Ms. Maynard’s work is in “Black Melancholia,” a group show at the Hessel Museum of Art at Bard College in Annandale-on-Hudson, N.Y., that explores “the depression that racism itself generates — the dread, anger and despair that create a low-pressure area in the soul,” Holland Cotter wrote in a New York Times review in June. The show runs through Oct. 16.

Even Ms. Maynard’s large-scale works of public art — like her sweeping glass-and-tile mosaic mural in the 125th Street station of the Lexington Avenue subway line in Harlem, or her nearly 17-foot-tall stainless steel airfoil sculpture commemorating Black veterans at Ramsay Park in Boston — convey a Black point of view that she felt was intrinsic to her work.

“It’s in everything,” Ms. Maynard said of her Black identity in a 1990 interview with Art Papers, an Atlanta-based art advocacy group. “You cannot shake off who you are. Your voice, the way you sit, the way you talk, everything — it cannot be taken away.”

Ms. Maynard spent much of her career in education. She taught at Howard University, the University of the Virgin Islands and the Baltimore School for the Arts, where she founded a sculpture program. For her, fame was not the point.

Valerie Jean Maynard was born in Manhattan on Aug. 22, 1937, the middle child of William and Willie Fred (Pratt) Maynard. Her father held a variety of jobs — security guard, dockworker, bartender — while her mother stayed home with the children.

She is survived by her brother and a sister, Barbara Fraser.

Although she was born in the waning years of the Harlem Renaissance, the neighborhood was still a cauldron of cultural ferment when she was growing up there, on West 142nd Street. Her family lived next door to the poet Audre Lorde; Mr. Baldwin, who became a lifelong friend, lived nearby. “I went to school with one of his sisters and spent many hours just sitting and talking with him and his mother,” Ms. Maynard said in an interview published this month in Baltimore magazine.

Ms. Maynard told the magazine that she saw jazz luminaries like Charlie Parker and Dizzy Gillespie on their way to gigs at the Savoy Ballroom and attended Sunday services at Abyssinian Baptist Church presided over by the fiery activist pastor and future congressman Adam Clayton Powell Jr.

“You just saw these people as neighbors,” she said. “‘Oh, that’s Langston Hughes over there.’ The fame didn’t mean anything to us. It wasn’t until I was older and looking back that I saw the enormity of it.”

In her youth she took classes at the Museum of Modern Art on weekends, and she went on to study art at the New School for Social Research in Greenwich Village. She received a master’s degree in sculpture and art from Goddard College in Vermont in 1977.

“Rufus” (1968), one of Ms. Maynard’s best-known pieces. She found the stone at the bottom of a swimming hole.Credit…Valerie Maynard/the Baltimore Museum of Art

Despite her training, one of her best-known pieces, “Rufus,” a brooding bust of a man’s head, sprung from a beginner’s attempt at stone carving, plus a dash of serendipity.

While working at a summer camp in Brattleboro, Vt., in 1968, Ms. Maynard leaped from a rope swing at a swimming hole and discovered a large rock underwater that for some reason intrigued her. She later returned and hauled the hulking stone from the mud, using a rope and pulley system of her own design.

“That was another thing that Valerie was really good at,” Ms. De Veaux said. “She knew how to use her hands.”

Back in her studio, Ms. Maynard “waited for what she believed was the spirit inside the stone to reveal itself; only then did she carve away to release the spirit,” Ms. De Veaux said, adding that Ms. Maynard made a point of using hand tools, not electric. “She told me, “It’s all in the reveal, Alexis. You can’t write what hasn’t been revealed.’”

Celebrating the ‘Great Night of Shiva’ in Kathmandu 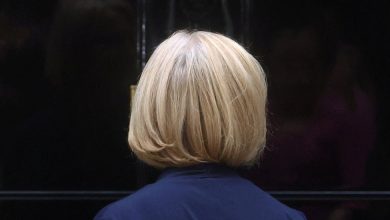 Jackson Vows to Be Independent on Supreme Court if Confirmed