All good New Yorkers know that Lower Manhattan would lose a piece of its identity if Chinese businesses disappeared from Chinatown. In Little Italy, when the Italian Americans moved away, real estate brokers scrubbed one part of the area of its ethnic identity by renaming it NoLIta. If this tactic is successful a few blocks south, we could see apartment listings on Doyers and Pell Streets advertising their prime location in the heart of SoChiTo.

Walk around the neighborhood on any given day, and this scenario won’t seem as far-fetched as it should be. Chinatown started to empty out almost two years ago, when Covid-19 was still a rumor in New York City but a poisonous anti-Asian mood was rising, and it is still not packed the way it used to be. The tourists the area depends on still haven’t returned in force. And for the past few years, the focus of the city’s permanent class of Chinese-restaurant geeks has shifted to other parts of town, especially the East Village and Flushing, Queens. 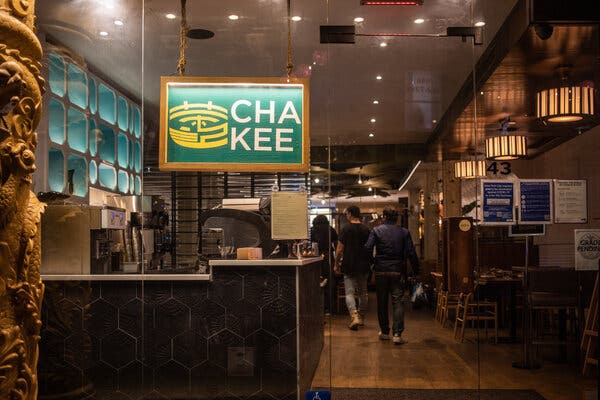 But there is a new restaurant that deserves their attention down on Mott Street, under the hundreds of orange, yellow and pink paper lanterns that a group of Chinatown boosters has strung over the pavement. Cha Kee arrived in September with a menu that is fundamentally Chinese but bends this way and that to borrow ideas from other places, particularly Japan. Revolution is not Cha Kee’s aim, but it does hold more surprises than many of the neighborhood’s old familiar haunts.

The dining room is quietly and unobtrusively stylish, blending a midcentury look with East Asian motifs. The seats are modeled after the China chair, a 1944 design by Hans J. Wegner that was itself inspired by furniture from the late Ming and early Qing dynasties. The floors and tables are bare wood. Small lights hang from a canopy of enormous green metal leaves.

None of this keeps Cha Kee from being a place where you might bring your grandmother and, swapping out a Wegner seat for one of the high chairs stacked by the door, a baby. Which is to say that Cha Kee means to be a real Chinatown restaurant.

The bundle of concentration working head down in the open kitchen is the chef, Akiko Thurnauer. A native of Tokyo, she once ran an idiosyncratic, mostly Japanese restaurant on Eldridge Street called Family Recipe. It never achieved real fame, but it did win a cult of local followers, many of whom haven’t gotten over its closing, in 2014.

Her menu at Cha Kee roams freely around China. Hong Kong’s curry puffs are the point of departure for the crisp, flaky pastry triangles folded around a thin but potent layer of spiced beef. They didn’t last long at my table. Crunchy, chewy ribbons of jellyfish, along with bits of cucumber and sweet-potato noodles, lounge in a dressing whose hot-and-numbing flavor instantly says Sichuan.

Ribbons of jellyfish are dressed in a sauce with the hot-and-numbing imprint of Sichuan cuisine.Credit…Lanna Apisukh for The New York Times

In Ms. Thurnauer’s tribute to the chicken curry of Macao, potatoes and firm green olives round out the pieces of blackened and stewed chicken, but the broth swerves from tradition: Instead of the canonical mild turmeric-yellow coconut curry, she makes an intense brick-red sauce that is thick with paprika and other ground spices. The dish is known in Asia as Portuguese chicken. It doesn’t taste very Portuguese, but Ms. Thurnauer’s does. The recipe is a good one, wherever it comes from.

The branzino she rubs with chile-lemongrass paste and wraps in a banana leaf that goes on the grill must derive from sambal skate; it’s very likable, but I missed the untamed pungency of the Singaporean original.

After she shut down Family Recipe, Ms. Thurnauer made the broths at Ivan Ramen for a time. Some of that restaurant’s spirit of adventure may have made its way into Cha Kee’s bone-marrow ramen, a frequent special that arrives with a section of beef shin the length of a spaghetti box extending from the bowl. I forgot all about the noodles once I realized I was supposed to scrape the marrow from the bone on the youtiao hiding at the base of the bowl.

More recently, Ms. Thurnauer cooked at Mission Chinese, on East Broadway. There’s an echo of that restaurant’s braised cabbage in soy milk at Cha Kee, with braised romaine. It lacks the chamomile that made the Mission version so transporting, but I admired the lift Ms. Thurnauer provides with pumpkin seeds and seaweed flakes, and I loved how the outer leaves of the young lettuce heads were barely wilted while the core stayed crisp.

Akiko Thurnauer, right, is the chef, overseeing a menu that roams around China.Credit…Lanna Apisukh for The New York Times

At Mission Chinese, the kitchen had a tendency to try to make every dish into a three-ring circus. That is not Ms. Thurnauer’s way. Her style is less frantic, and at times it can be a bit too calm. Her tiger salad might work better as a garnish for a piece of fish or meat that needs a flurry of herbs than it does as a stand-alone dish. The noodle, tomato and scramble-egg stir-fry didn’t have much to say for itself, either.

But often, a smart idea is hiding in the landscape, waiting to be noticed. The shrimp fried rice would still be appealing without the little tufts of scallop floss. Scattered around like tiny tumbleweeds, they give the dish a small push in the direction of the ocean. And while people who run from the sight of okra may wish Ms. Thurnauer had left it out of her rendition of black-pepper beef, fans will appreciate the way she serves the dish in a nest of fried noodles, pitting their crunch against the okra’s goo.

In the best Chinatown tradition, dessert is not a big deal at Cha Kee. There is only one on offer, a lemon meringue tart with more meringue than lemon. Both are upstaged by the swirl of soft-serve ice cream that Ms. Thurnauer makes, winningly, from Hong Kong-style milk tea.

14 Vegetarian Soups and Stews for a Cozy Fall

The Platonic Ideal of Macaroni and Cheese