Kiki di Savoy, a decorator based in Palm Beach, Fla., who is married to the owner, designed the home with a vivid mix of sleek finishes, Mexican motifs and period-hopping European flourishes. In 2020, the owner gut-renovated the 4,300-square-foot apartment, which has 10 bathrooms — six full, four half. The sale includes all furnishings, accessories and lighting, some custom-designed by Ms. di Savoy.

“The shapes and textures come together to express a way of living in a completely European style,” said Laura de la Torre de Skipsey of Mexico Sotheby’s International Realty, the listing agent. 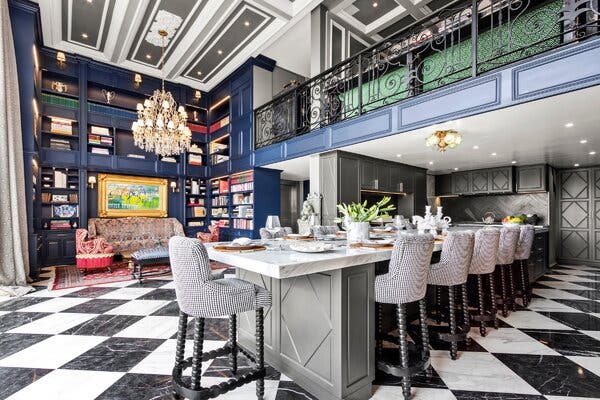 The apartment’s first level has Italian marble floors and double-height ceilings. A long marble dining table extends from the kitchen through the dining area.Credit…Courtesy of Mexico Sotheby’s International Realty

A private elevator opens to Italian marble floors on the apartment’s lofted first level, where the living and dining areas have double-height ceilings. Full-length windows open to a small terrace with sweeping views of the 1,700-acre Chapultepec Park to the south. A long dining table carved from a single marble slab extends from the kitchen through the dining area, and a century-old chandelier hangs overhead. Ceiling-height bookcases, painted blue, punctuate another section of this level, along with antique rugs and vibrantly upholstered seating. Nearby, a reading area with built-in bookshelves is tucked into a nook at the foot of the staircase.

Through an archway on the second-level landing, a family room overlooks the living and dining areas from a mezzanine. The rest of the second level comprises bedrooms, each with an en suite bath. The principal suite, with its 200-square-foot walk-in closet, is accented by an angular custom carpet assembled from antique Persian rugs.

The owners transformed the third level into an 800-square-foot covered terrace, clad in teak, with its own living room, kitchen, fireplace, two fire pits and two bathrooms. The terrace is open on two sides.

Lomas de Chapultepec is “a well-established residential area with a lot of old-money families,” Ms. de la Torre de Skipsey said. While large detached homes predominate, this small street includes a cluster of apartment buildings. “The owners chose this building because it’s simple and discreet,” she said. “From the outside, you don’t see the luxury inside.” The building has a 24-hour doorman, and the sale includes six underground parking spaces.

Lomas de Chapultepec abuts other upscale Mexico City neighborhoods, including Polanco and Reforma to the north, and Palmas and La Condesa to the east. Attractions, including the Chapultepec Zoo, the National Museum of Anthropology and the Museum of Modern Art, are within two miles. Mexico City International Airport is about 11 miles east.

Full-length windows open to a small terrace and offer sweeping views of the 1,700-acre Chapultepec Park to the south. Credit…Courtesy of Mexico Sotheby’s International Realty

Mirroring a familiar pandemic migration, many Mexico City residents are selling their homes or apartments and moving to outlying areas with more space and greenery, said Hector Romero, partner at the Peters & Romero Bienes Raices agency in Mexico City. “The effect is that there’s more supply, with many people who are just trying to get rid of property,” he said. The increased inventory also has suppressed prices, which “have not gone up much in recent years.”

Meanwhile, economic anxiety has impeded investment, according to Andrés Vizcaíno of KW Pedregal Keller Williams, in Mexico City. Since the 2018 election of the leftist President Andres Manuel López Obrador, Mexico’s economy has continued to contract. Investors “are selling properties in Mexico City to reinvest in other countries,” Mr. Vizcaíno said.

Ms. de la Torre de Skipsey agreed: “Mexicans are buying in Madrid, Miami and New York, but not Mexico. They’re afraid to invest here, so we have a lot of inventory.”

The high-end market has been hit especially hard, said Sergio Gómez Rábago, an architect who leads the Education Center of Realty Business Operations for Asociacion Mexicana de Profesionales Immobiliarios, a national organization of realtors. But a recovery may be forthcoming. “The market will realize we’re already in the second half of this government’s term, and they’ll take advantage of reduced prices of luxury homes,” he said. “By 2023-24, prices will end up going where they should be.”

Mexico does not have a centralized database for real estate transactions. According to a report from the Sociedad Hipotecaria Federal, a government financial agency, the average price for a home in Mexico during the third quarter of 2021 was 1.364 million Mexican pesos ($65,900). In the state of Mexico City, which includes the capital, the average was 1.302 million pesos ($62,920).

Prices vary widely among neighborhoods in sprawling Mexico City, which has nearly 10 million residents. Overall it remains the most expensive market in Mexico, according to Ramon Davila, CEO of real-estate sales and marketing firm Inmobilux, with average prices at about 4.2 million pesos ($202,000) — “about $85,000 above the national average,” he estimated.

Through an archway on the second-level landing, a family room overlooks the living and dining areas from a mezzanine with a wrought-iron railing.Credit…Courtesy of Mexico Sotheby’s International Realty

In affluent neighborhoods like Polanco or Condesa, Mr. Davila said, prices range from about $370 to more than $1,000 a square foot. Mr. Romero estimated the average apartment price “in more desirable areas” at about $600,000. “Foreigners get attracted because they think Mexico City’s a cheap market, which it actually is not,” he said.

Prices level off in middle-class neighborhoods like Benito Juarez, Gustavo Mader, Coyoacan, and Alvaro Obregon, said Mr. Vizcaíno said, with prices ranging from about 1 million to 2.75 million pesos ($48,300 to $133,000), based on his 2021 sales.

Who Buys in Mexico City

While international buyers are snapping up properties in coastal markets like Puerto Vallarta and popular retirement areas like San Miguel de Allende, most foreigners in Mexico City choose to rent rather than buy, according to Mr. Davila. In the upscale coastal enclave of Punta Mita, “there’s not a single apartment to sell. In Mexico City there is a lot more,” he said, noting that many foreigners move to Mexico City as a result of corporate relocations, with their employers often picking up the tab for rental housing.

When a foreigner does buy a home in Mexico City, it’s often a pied-à-terre in a fashionable area like Polanco, Condesa, Roma or Lomas de Chapultepec, “all of which are pretty safe, with their offices, embassies and police presence,” Mr. Romero said. “They might use that pied-à-terre as a home base to explore the rest of Mexico.”

Several brokers reported no sales to foreign buyers in Mexico City in all of 2021. Ms. de la Torre de Skipsey, who specializes in luxury properties at Sotheby’s, said she had one American and one British client buy in Mexico City last year, “though we have many foreigners renting.”

The principal suite is accented by an angular custom carpet assembled from antique Persian rugs. The sale includes all furnishings, accessories and lighting.Credit…Courtesy of Mexico Sotheby’s International Realty

Since Mexico’s housing market is unregulated, foreigners should retain a lawyer “to review contracts and avoid fraud,” Mr. Pikoff said. While escrow arrangements are rarer in Mexico than in the United States, “escrow is becoming more common with increased foreign investment, as opposed to a direct deposit to a seller,” he said.

All property transactions must go through a notary, said Israel Miñon, a tax partner at the Mexico City office of global accounting firm Russell Bedford. “The notary does due diligence in the public registry to confirm ownership and avoid fraud,” he said. Buyer and seller sign purchase documents in the notary’s presence, and the notary remits taxes related to the transaction on behalf of all parties. Foreigners who own rental properties are subject to the same taxes as Mexican nationals, he said.

Because interest rates trend higher in Mexico, most foreign buyers pay cash, said Mr. Romero, “though they could obtain a mortgage.”

The owners transformed the third level into an 800-square-foot covered terrace, clad in teak, with its own living room, kitchen, fireplace, two fire pits and two bathrooms.Credit…Courtesy of Mexico Sotheby’s International Realty

Notarial fees vary depending on the location and size of a transaction, said Gustavo Morales, a notary at Notarios 92 in Mexico City. For this apartment, notarial fees and a 16 percent value-added tax on professional services would total about 0.48 percent of the total purchase price, he said. Mr. Pikoff estimated lawyer’s fees at $5,000 to $10,000.

A 6 percent agent’s commission is typical, along with a 16 percent value-added tax on the commission amount, Ms. De la Torre de Skipsey said.

House Hunting in Spain: A Square Doughnut in Andalusia for $750,000

House Hunting in England: Country Living in the Cotswolds for $3 Million

They Broke Up With Two Architects Before Finding the Right One