AUSTIN, Texas — “I didn’t know I was half Dominican until I got older,” the comedian Aida Rodriguez said from the stage at the Stateside Theater. “They broke it to me like it was bad news.”

The crowd laughed, but Ms. Rodriguez was serious. This is a subject close to her heart. The range of Latino identities in America often falls under the broad category of “Hispanic,” a box to check on a census chart that blurs the richness of the many cultures it encompasses. In a country where a handful of famous Latino comics come mostly from the Southwest, Ms. Rodriguez wants to bring a Caribbean perspective to the forefront.

When she was 3 years old, her mother left her father and moved them to Miami from Santo Domingo, the Dominican capital. She grew up with her Puerto Rican side of the family, thinking she was only Puerto Rican. It wasn’t until this year, when she met her father for the first time since then, that she reconnected with Dominican culture.

She now uses comedy to process the parts of her life over which she didn’t have any control.

“It’s hard to see things that are a part of you that you don’t remember that well,” said Ms. Rodriguez, from the greenroom before her set at the Moontower Comedy Festival on Sept. 22. Earlier this year, she filmed a one-hour comedy special, which premieres on HBO Max on Nov. 4. In the show, she uses material that touches on her upbringing and her hardships. She looks at it all unflinchingly. In fact, she even had cameras rolling when she met her father, capturing parts of their reunion to weave into the hourlong video.

The pieces are starting to fall into place for Ms. Rodriguez’s comedy career, but when she first started she was a single mother of two, and stand-up was more of an outlet than a path she thought she would take.

“I couldn’t afford a therapist,” she said.

In 1998, she left her husband, a former football player for the Chargers, and moved from San Diego back to Miami. “I went home for two years to recover,” Ms. Rodriguez said. “I didn’t fit into that world.” 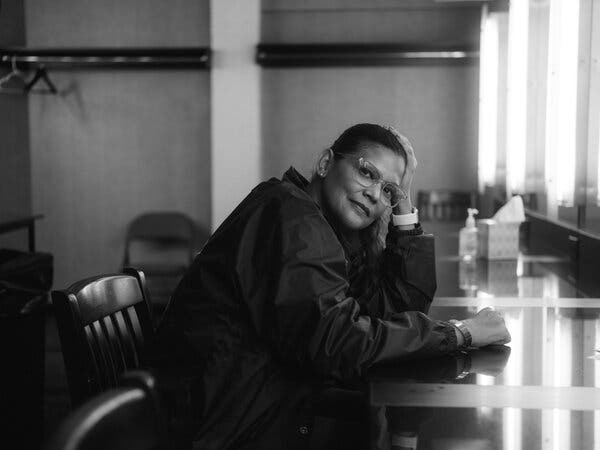 “It was a reality show, but as a Latina it was the only chance I had,” Aida Rodriguez said of appearing on “Last Comic Standing.” “I had to be very careful that I didn’t perpetuate stereotypes. It was heavy.”Credit…Christopher Lee for The New York Times

At the same time, she was working on a script that she submitted to the Sundance Screenwriters Lab, a workshop where new screenwriters are paired with seasoned writers who help them finish their manuscripts. When she was named a finalist for the program, she saw it as an affirmative sign to pursue her acting career, so, in 2000, she moved to Los Angeles. She took a job at a financial firm in between acting jobs and was signed by a talent agency.

“I was signed pretty quickly,” she said. “It was part of the illusion that I was going to make it.”

The trickle of acting jobs she had been booking soon dried up. In 2007, she started appearing on “Speedy’s Comedy Corner,” a radio show on Jamie Foxx’s Sirius XM radio channel, The Foxxhole. The staff of the show put together a comedy show at the Orpheum Theater in Phoenix and invited Ms. Rodriguez to be part of the lineup.

It was her first time onstage, and she was a hit. The audience roared throughout her five-minute set. She was hooked on that feeling, but it would be a long time before she’d be able recapture it. Back in Los Angeles, she managed to get a three-minute “First Impressions” spot on a “Chocolate Sundaes” show at the Laugh Factory.

“I bombed,” Ms. Rodriguez said. “I did well for the first few minutes, but then I got cocky.”

She then booked another five-minute set, this time on “Comic View: One Mic Stand,” a BET show hosted by Kevin Hart. But she wasn’t ready. “Five minutes when you’re bombing, feels like three hours,” Ms. Rodriguez said. “I realized it was too early for me and I needed to focus on the craft.”

She began showing up for open mic nights at the Westwood Brewing Company in Los Angeles. Soon after, she started hosting a weekly comedy show at the Hollywood Studio Bar and Grill. After two years there, she picked up another hosting gig at a comedy club in San Diego for three years.

Her big break came in 2014, when she auditioned for Season 8 of “Last Comic Standing,” a reality competition show on NBC whose executive producers included Wanda Sykes. Other comedians warned Ms. Rodriguez about the snare of reality shows, but she felt it was her best shot at success.

“It was a reality show, but as a Latina it was the only chance I had,” Ms. Rodriguez, 44, said. “I had to be very careful that I didn’t perpetuate stereotypes. It was heavy.”

Ms. Sykes advised her to let go of her inhibitions. “It just takes a while to feel comfortable with who you are,” Ms. Sykes said in an interview. “I think the journey is difficult, but once you get there and you can do it, it is so liberating and cathartic and just raw and beautiful.”

Although Ms. Rodriguez didn’t win the competition, she said it helped her find her voice, and she began booking mainstream comedy clubs across the country. She performed at colleges, went on a 10-day military tour in Korea, and landed a role in “The Comedian,” a 2016 film about an aging comic starring Robert De Niro.

Everything seemed to be falling in place, but Ms. Rodriguez still felt like an impostor, she said. She often felt like she was cheating, like she could be found out at any moment.

“I just thought, I keep getting away with it,” Ms. Rodriguez said. Still feeling like she had something to prove — at least to herself — she went to New York.

As the saying goes, “You go on the road to get good, you go to New York to get great, then you go to L.A. to get famous,” she said. The New York comedy scene helped her feel validated. Ms. Rodriguez is now a regular at the Comedy Cellar. “I go every month to do stand-up because that’s where you get the respect,” she said.

Her satire is awash with the themes of race, religion, millennial wokeness and motherhood.

“People were throwing up Black Lives Matter signs during the marches,” she says during her special. “And they only put those signs up so nobody will break their windows.”

Onstage, Ms. Rodriguez finally gets to enjoy the spotlight and she wants to use it to inform and use humor to bring her identity to light, she said. “I want to create more space for other people.” As she puts it in her special: “We have this ethnic spectrum that contains all the races — we have white, Black, Asian, Indigenous, we have everybody.”

With her newfound fame came a broader reach and higher expectations. In 2018, she was criticized for suggesting that Louis C.K., who had been accused of sexual misconduct by five women, use his routine to educate other men.

“If he uses the opportunity to address his shortcomings, maybe he can change a few minds among his fans and maybe he can save a couple of girls from unnecessary and unwanted incidents,” Ms. Rodriguez told The Hollywood Reporter.

“They called me a rape apologist,” Ms. Rodriguez said, while in the greenroom of the Stateside Theater in Austin, minutes away from performing her first hour of stand-up since the start of the pandemic. “Because I said when he comes back, he should use his privilege and his platform to speak to the people who think like him because I can never reach those people.”

In 2019, Ms. Rodriguez was one of six comedians chosen by Tiffany Haddish to be part of her Netflix anthology series, “Tiffany Haddish Presents: They Ready.” Every episode is a 30-minute special from a different comedian. Once again, Ms. Rodriguez made headlines. This time, for jokes that were considered homophobic.

“If you want to have a conversation with me and say, This is problematic? Let’s talk about it,” Ms. Rodriguez said. “You want to blast me on social media and try to take me down knowing that I’m at the bottom? I get paid the least out of everybody in comedy. Latinas are getting paid less than everybody, comedy is not exempt from it.”

Now, Ms. Rodriguez mentors other Latina comedians, in hope that they can avoid becoming caught in industry traps.

“She probably is looking out for me in ways that I don’t even know,” said Glory Mora, 33, a comedian in New York who produced a show Ms. Rodriguez headlined, called “Morir Soñando,” after a popular Dominican drink. “When she did our show, she gave us props and she didn’t even have to do that.”

Ms. Rodriguez is also starring in and writing a half-hour comedy show based on her life, which is in development at HBO Max. Ms. Haddish has signed on as an executive producer. “I just want to show my people in an honest light,” Ms. Rodriguez said. “I want to be true to us.”

It was call time and she headed to the stage. In a camo jacket, gray jeans and a bright pair Jordans designed by the rapper J. Balvin, she got to the microphone and opened up with a Karen joke.

Several people got up and exited the theater.

“That’s OK,” she reassured the rest of her audience. “Paul Mooney told me that if 10 people don’t leave while you’re onstage, you’re doing it wrong.”

“I just want to show my people in an honest light,” Ms. Rodriguez said. “I want to be true to us.”Credit…Christopher Lee for The New York Times
Tags
Come Had Sai̇d She Show

An 8-Year-Old Explains the Metaverse

‘A First in the History of Fashion’